In January, Donald Trump gave his State of the Union address. In one of those irresistible coincidences that the calendar occasionally furnishes, the same month marked the 200th anniversary of Percy Bysshe Shelley’s sonnet Ozymandias. It’s a famous poem, so famous that schoolchildren were once expected to memorize it. So perhaps you know it. A traveler discovers a ruined monument, left by an ancient king, half-buried in the sand. All around is a featureless desert. The stumps of the tyrant’s legs are still visible, as is his “shattered visage,” with its “frown/ And wrinkled lip and sneer of cold command.” So, too, is the inscription, with its famous lines: “Look on my works, ye Mighty, and despair!”

As I say: irresistible. This is not the place to expound on the relevance of Shelley’s allegory to our singularly self-aggrandizing president. But a bicentennial is a bicentennial, so let’s spare a thought for Ozymandias. This is a magazine about antiques, after all, and what could be more antique than a two-hundred-year-old text about an ancient statue? More to the point, what does Shelley’s poem tell us about the nature of antiquity itself, and why we are so drawn to it?

The first thing is that Ozymandias fit into a broader pattern. In 1818, romanticism was well under way, and with it, the cult of the ruin. There was a lively trade in archaeological fragments—Sir John Soane’s Museum in London is a wonderfully preserved collage of them—and other collectibles, from cork models of ancient sites to Josiah Wedgwood’s “ruined vases.” Artists like Hubert Robert and Giovanni Battista Piranesi had popularized the melancholy theme of lost classicism in the latter half of the eighteenth century, and other painters followed suit. Their works found a growing market for images of fallen monuments, particularly among British aristocrats on the Grand Tour. Thomas Cole, subject of a fascinating current exhibition at the Metropolitan Museum of Art focusing on the artist’s transatlantic connections, first set foot in America in 1818, and brought to the new nation the Old World’s preoccupations with fallen idylls. His tremendous cycle The Course of Empire (1833–1836) a meditation on the rise and decline of temporal power, was every bit as metaphorically potent as Shelley’s verse.

Copies and pieces of ancient monuments satisfied most, but other ambitious souls traveled to Greece and Egypt to bring back the originals. Famous examples of course are the Parthenon frieze sculptures taken from Athens by Thomas Bruce, Lord Elgin, between 1801 and 1815, still controversially held by the British Museum. Less well known, but equally bold, was the pillaging of Egypt by the adventurer Giovanni Battista Belzoni, who removed an enormous granite statue of Ramesses II to England. It too is one of the major attractions at the British Museum, and is often mistakenly thought to have been the inspiration for Shelley’s poem. (Fake news is nothing new; the sculpture did not arrive in London until shortly after Ozymandias was published.)1 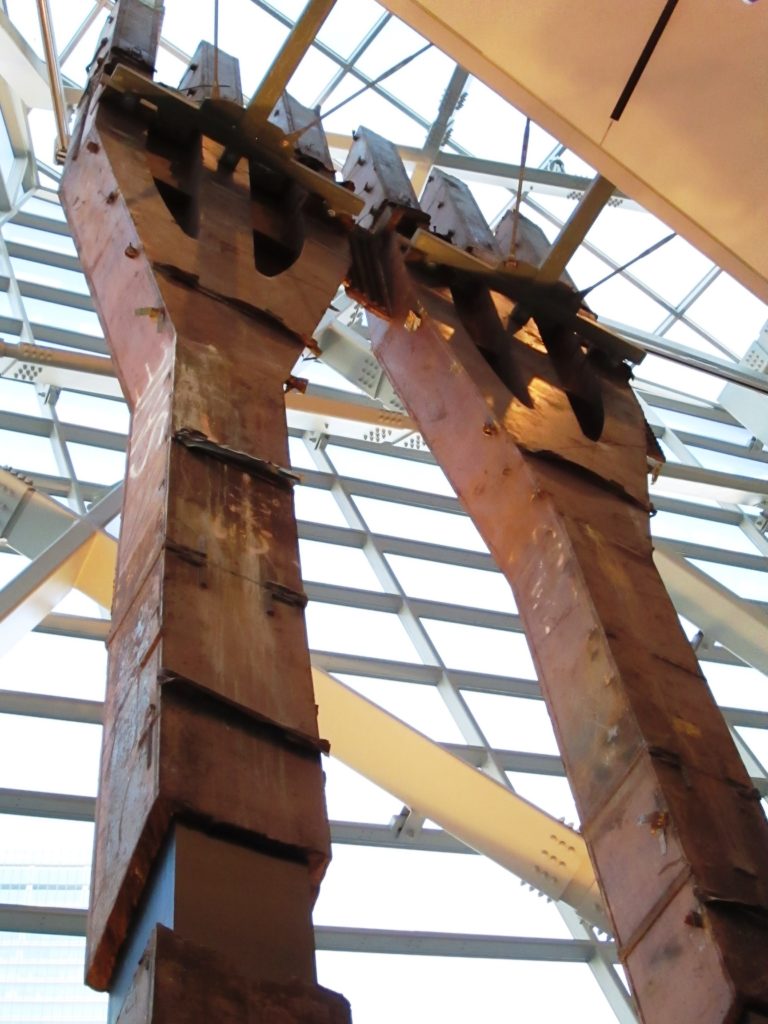 Remnants of 2 World Trade Center’s facade, known as the “tridents,” in the National September 11 Memorial and Museum. Photograph by Beyond My Ken on Wikimedia Commons.

One way of interpreting the phenomenon is as a psychological response to the experience of terrorist attacks—particularly those of September 11, 2001.3 Other nations at other times, faced with such a trauma, would doubtless have erected a memorial. But few would have constructed 110,000 square feet of exhibition space filled with the relics of the tragedy, as we have in building the National September 11 Memorial and Museum. Enormous twisted girders and scorched firetrucks share a cavernous space with grimy teddy bears and loose fax papers, to crushingly emotional and absorbing effect.

In a recent, high-tech parallel to this extraordinary feat of remembering, the Institute of Digital Architecture has created a highly accurate scale model of a triumphal arch from Palmyra, based on scans taken just before ISIS fighters maliciously destroyed the ancient monument. It garnered worldwide attention when it debuted in Trafalgar Square in April 2016, the ghostlike object contrasting eerily with Nelson’s Column and other triumphant symbols of British military and imperial glory.

How might Ozymandias help us think about these developments? Well, Shelley’s poem is ultimately about hubris: each generation’s failure to confront its own mortality, and the “enormous condescension of posterity” (to borrow a line from E. P. Thompson) that is inevitably brought to all human achievements. We desperately want to leave a permanent mark, but history usually has other ideas. One could even say that our contemporary fascination with ruins, the extraordinary lengths to which we go to conserve the relics of our own conflicts, is as quixotic as Shelley’s fictional inscription. We persist in trying to freeze time. We want the future to have the same past that we do (just a little more of it, as we’ll be gone ourselves). And as technology gets faster and faster, that desire seems to grow stronger and stronger. Broadening the frame slightly, one could even see our museums, with their ever-expanding exhibition halls and for fit legions of skilled conservators, as Ozymandian deserts. The objects in our galleries are all displaced, their original purpose frustrated, as surely as was the ancient king’s domination of all he surveyed.

There is another, better way of looking at things, though. The theorist Andreas Huyssen has made a case for the ruin as a crucial metaphor for our society: “a utopia in reverse.” According to Huyssen, we value fallen monuments not because they express our own false superiority over the past, but because they mark turnings not taken in the historical road. “We are nostalgic for the ruins of modernity,” he writes, “because they still seem to hold a promise that has vanished from our own age: the promise of an alternative future.”4 This ingenious interpretation positions the 9/11 museum, or the digital re-creation of Palmyra, as useful reminders of human frailty. They are not analogous to the statue of Ozymandias, the fallen despot; rather, they are like the poem Ozymandias itself: a cautionary tale that we should not forget.

With this in mind, we might return to Shelley’s lines once more. In his bleak account, there is one figure who is singled out for praise: the sculptor who made the ancient statue. The despot Ozymandias is long dead, Shelley muses, but his passions “yet survive, stamped on these lifeless things.”

The chiseled stone, almost overcome by the “lone and level sands,” is a symbol of fallen pride. But it also holds another truth, one that bears repeating in 2018 as much as it did in 1818. We should never underestimate the seemingly intangible values of the aesthetic and the poetic. Art outlasts power.