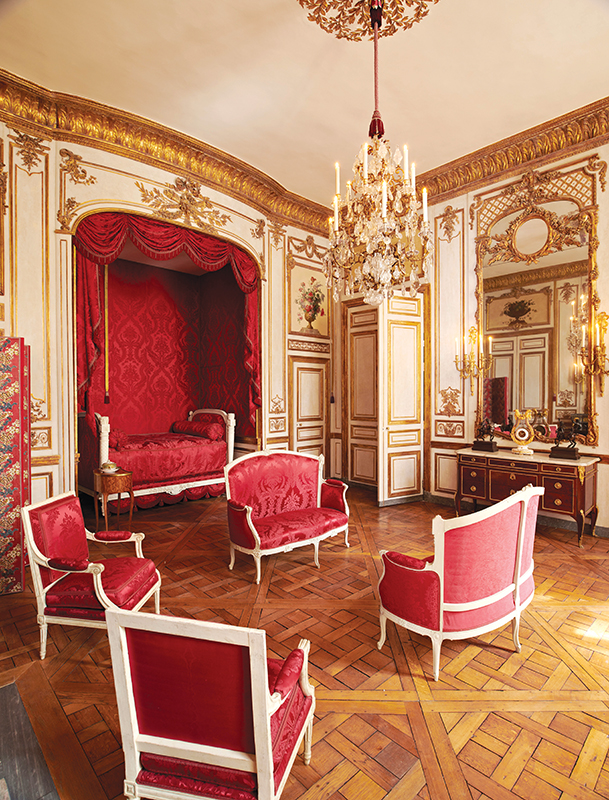 When we think of Paris, we almost invariably think of Baron Haussmann’s transformation of the city in the latter half of the nineteenth century. This emphasis, however, does a disservice to the crucial role that the monarchs and magistrates of the previous century, especially Louis XV, played in creating the city that we know today. It was in Louis’s honor that the Place de la Concorde was created, and it was under him that the Pantheon, the Church of Saint- Sulpice, and the Mint were undertaken on the Left Bank, that the dozens of stately hôtels particuliers that abound near Saint-Germain-des-Prés were built, and that Parisians began to colonize what is now the vast 8th arrondissement.

Few of Louis’s projects, however, can rival the masterpiece of the architect Ange-Jacques Gabriel on the northeast corner of the Place de la Concorde. Now, for the first time in over 250 years, it has opened to the public as a brand new museum, the Hôtel de la Marine. Indeed, it is one of two eminent Parisian buildings from Louis’s reign that have been reborn as museums in the past year: the other is the Bourse de Commerce in Les Halles, which, much restored in the nineteenth century, now houses the contemporary art collection of François Pinault.

The name of the new museum, the Hôtel de la Marine, is somewhat unfortunate, since it will doubtless lead many would-be visitors to assume that it has something to do with the French navy, a subject unlikely to inspire all that much enthusiasm in the general public. It is socalled because, from 1789 until 2015, it housed the navy’s top command. Before that time, for about thirty years from shortly after its completion about 1760 until the collapse of the ancien régime, it served as the Garde-Meuble de la Couronne, charged with storing the royal furnishings, which were sent out as needed to serve the monarchy and visiting heads of state. The museum that has now opened to the public, however, is a kind of tautology: the building itself and its magnificently restored period rooms, from the eighteenth and nineteenth centuries, are almost all there is to see in the museum, but by themselves they richly justify a visit.

In fact, the building that contains the museum is one of two identical structures situated at the northern end of the Place de la Concorde, on either side of the Rue Royale. Designed by perhaps the finest, certainly the most lyrical and refined architect of eighteenth-century France, their insistent Corinthian columns, rising over a rusticated base, are crowned by a balustraded attic between two temple-like pavilions. They are an eloquent and reverent tribute to architect Claude Perrault’s great Colonnade of the Louvre, about a mile to the east.

Both structures are crucial elements of the public square that they dominate, and the square itself was an important part of the urban strategy that Louis XV implemented in a number of French cities in the middle years of the eighteenth century, among them Bordeaux, Reims, and Nantes. Earlier examples of royal intervention, Henri IV’s Place Dauphine and Louis XIV’s Place Vendôme, were real estate ventures intended to beautify the capital through prestigious housing for the rich. Louis XV’s interventions, however, in Paris and elsewhere, were civic in nature, glorifying the monarchy and the nation through great public buildings.

The identical structure to the west, which now houses the Hôtel de Crillon among other institutions, in fact consisted of three private residences that were ordered, in the name of symmetry and the national good, to submit to the grandiose facade that the crown imposed upon them. Seen from the air, that building’s footprint, directly behind the facade, betrays something of the ad hoc manner of its construction. The Hôtel de la Marine, by contrast, was conceived from the start as a unified project in the service of the monarchy. If Gabriel designed the facade, the structure behind it was largely executed by Jacques-Germain Soufflot, a pioneer of neoclassicism who is best known today as the architect of the Pantheon. Now, under the guidance of the Centre des Monuments Nationaux, the building’s 550 rooms have benefitted from a four-year, 132 million euro renovation carried out by the designers Joseph Achkar and Michel Charrière. In the process, all non-original interventions excluding those of the nineteenth-century period rooms were removed and the structure has been returned to its pristine state.

In addition to its period rooms and an elegant new restaurant, Lapérouse (named after a famous explorer who served in the royal navy), the museum displays the collection of antiquities belonging to the Qatari sheik Abdullah al-Thani, who provided much of the funding for the renovation. Only the rooms closest to the Place de la Concorde, however, are open to the public as part of the museum. The rest of the structure will operate as an office building: Morning, a company similar to WeWork, has rented over six thousand square meters, or roughly half the site, on the third, fourth and fifth floors, while the Fédération Internationale de Football Association, the governing body of international soccer better known as FIFA, also has its offices there.

In keeping with the contemporary tendency to question traditional museology, the spirit of the period rooms is more experiential than positivist. Without labels for the wealth of furnishings on view, the display aspires, almost jauntily, to convey something of the life of the long-vanished souls who once inhabited these spaces, especially Marc-Antoine Thierry de Ville d’Avray, the last overseer of the Garde-Meuble, who was responsible for selecting much of the decor. A sumptuous dining room table, no less than the desk in his study, appears in a state of elegant disruption, as though the former inhabitants had departed in haste moments before we arrived, but linger on among us as ghosts. One is somehow acutely aware of the guillotines that once arose a few feet from the entrance to the building. Led through these spaces by an Acoustiguide, we encounter neoclassical boiseries and mirrored bathrooms, tapestries from Les Gobelins and carpets from the Savonnerie manufactory, a canopied bed of pale blue silk, wall coverings to match, and parqueted floors of sycamore, mahogany, and amaranth.

To understand the appeal of the new museum, especially for the locals, it is important to conceive that, for two and a half centuries, Parisians have walked past this imposing edifice but were barred from entering, and so had little sense of what went on inside. Now, finally, they have taken possession of their inheritance, and at what may be a most auspicious moment. Because the car culture of the mid-twentieth century had a less visible effect on Paris than on London and New York, it is often difficult to understand the degree of damage that the city has sustained from cars, in some ways graver than any visited on the two other capitals. And the Place de la Concorde, of which the Hôtel de la Marine is so integral a part, has perhaps suffered most of all.

For the first century and a half of its existence, until the beginning of the twentieth century, the Place de la Concorde was a destination in itself, a place of celebration and leisure to which the citizens of Paris came in their millions. Since the introduction of cars, however, it has been about cars and nothing else. We enter the Place de la Concorde today under a sense of unpleasant necessity and we enter it in order to leave it, to get somewhere else. It is a plausible surmise that, in the past one hundred years, no citizen or visitor has ever traversed this space without a powerful sense of apprehension in the face of oncoming traffic.

In January 2021, however, Anne Hidalgo, the mayor of Paris, proposed a radical revision of the site to be completed well before the city plays host to the summer Olympics in 2024. In her sparkling vision, cars would be relegated to the perimeter of the vast space which, at nineteen acres, is larger than the World Trade Center site or Lincoln Center, while the majority of the space would be returned to pedestrians, with discreet and well-chosen landscaping to frame the legendary fountains and obelisk that are as symbolic of Paris as the Eiffel Tower. And in this wondrously renovated context, the new Hôtel de la Marine will serve as a defining ornament and one of its greatest attractions.