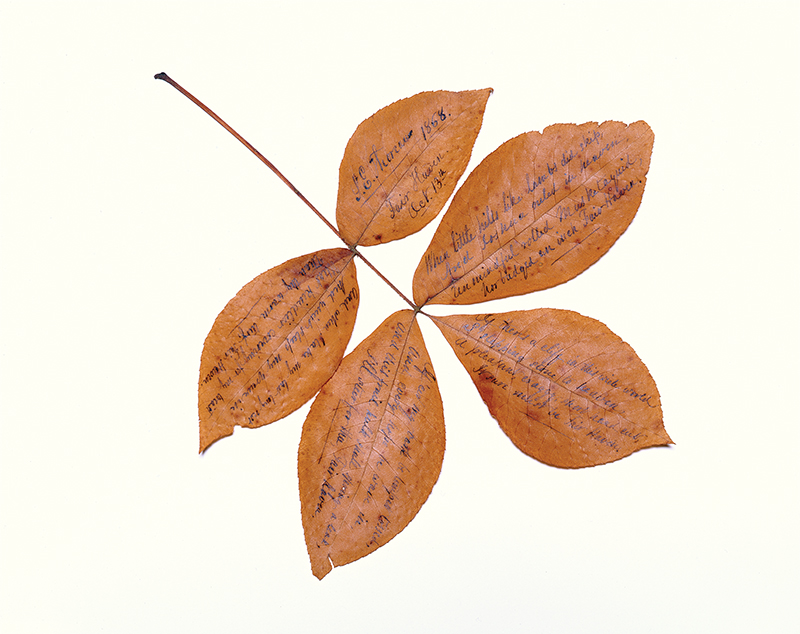 It’s not often you get to celebrate the 150th anniversary of a twig. Yet that is exactly the opportunity that presented itself this past October 13. On that date, back in the year 1868, Sophia Thoreau leaned over a sprig of five shagbark hickory leaves and inscribed them, in indelible ink, with some lines from a poem by her brother Henry. Part botanical specimen, part literary relic, this fragile survivor is today one of the great treasures of the Concord Museum.

On the big day, I posted the leaves on Instagram, thinking as I did so that it was a strange digital echo of Sophia Thoreau’s original gesture of pressing the leaves flat and then annotating them. Otherwise, the moment passed without fanfare. This seems a shame, for this delicate artifact speaks in so many ways of what has changed in the century and a half since it was created.

To understand why, it helps to read a bit of the poem, which is entitled “Fair Haven.” One of Thoreau’s earliest, unpublished in his lifetime, it sets a quiet corner of Massachusetts—a bay of the Sudbury River—in biblical scale. He first imagines the surrounding land’s ancient formation, in days “when little hills like lambs did skip, and Joshua ruled in heaven.” Then he proceeds to claim this ancient “haven” as just that, a private retreat:

To selfish fear, or craven,

And fickle mortals round me fall,

If e’er my bark be tempest-tossed,

And every hope the wave in,

And this frail hulk shall spring a leak,

Thoreau here offers a pastoral ideal, in which nature serves as a refuge from modernity, and also as a high seat of judgment.1 It is a common enough trope, but one that is perhaps identified with him more than any other author—not because of his poetry, but rather the memoir he wrote of two years, two months, and two days spent in the woods, Walden. For many generations now, that book has been taken not only as a classic of ecological writing, but also as an aspirational text, a guide that might yet instruct us. It is celebrated as an exemplar of how to live in harmony with the environment, how to achieve self-sufficiency, how to live light on the land. Given the deepening crisis of climate change, these lessons seem more important than ever. And so Thoreau, and Walden, are generally greatly admired.

But not universally. A couple of years back, New Yorker staff writer Kathryn Schulz published a critical assessment of Thoreau memorably entitled “Pond Scum.” In it she comprehensively dismantles the myth of the man. Schulz accuses him of sweeping hypocrisy, pointing out that Walden Pond in Thoreau’s day was “scarcely more off the grid than Prospect Park is today,” and that he routinely depended on help to get him through his supposed seclusion. She concedes that Walden is enlivened by beautiful description, but also points out (rightly) that many of its passages are “dry, sententious, condescending.” For her this is the work of an author “as parochial as he was egotistical,” who “never met an appetite too innocuous to denounce.”2 Most damning of all is her assessment of Thoreau’s attitude toward his fellow human beings, which she characterizes as dismissive and disdainful. In order to embrace the natural world, he felt it necessary to reject society.

Does any of this matter? Thoreau no longer cares what we think of him. But Schulz is making an important point: if we accept him as a model of environmentalism, we inadvertently accept his misanthropy, too. From his perspective, other people were not part of a life well lived. They were to be avoided. Extend Schulz’s argument to an extreme, and Thoreau becomes the ancestor of cabin-dwelling militants like the Unabomber. Extend it to a more reasonable degree, and you can see a connection to every self-appointed critic on social media who rails against the current state of affairs while doing absolutely nothing to help.

This line of thinking brings us right back to Sophia Thoreau and her exquisitely inscribed leaves. Like her elder brother, she was a proficient observer of the world around her. Another remnant of her artistry in the Concord Museum is a pebble, a mere three inches in length, decorated with a beautiful garden scene. She also kept a whole herbarium of specimens prepared in her flower press, most of which she left au naturel. When she did write on them, she chose not only passages from Henry’s work but also from that of his fellow transcendentalist Ralph Waldo Emerson, and (perhaps inevitably) Shakespeare, choosing lines from one of his sonnets that must have seemed particularly apt for fallen foliage: “Thou by thy dial’s shady stealth may’st know/ Time’s thievish progress to eternity.”3

As for her transcription of “Fair Haven” on hickory leaves, it offers a subtle corrective. Where Henry emphasized his own identification with a patch of ground, Sophia instead expresses a generous openness to her brother’s ideas. The difference in their authorship follows expected nineteenth-century gender dynamics, the man furnishing the phrases, the woman dutifully copying them out. Even so, it was Sophia who gave the poem its ultimate form. By binding language to leaf, she slows it down to its proper speed, rendering it a meditation rather than a proclamation. It is perhaps reminiscent of those Chinese sages who wrote poems on scraps of paper and then tossed them into a flowing stream, where they might sink without trace, or float onward to find readers.

Henry Thoreau’s green-painted desk also survives, also in the Concord Museum. It has a keyhole, much worn around the edges, thanks to his habit of locking up his papers inside. Among its usual contents was his journal, which he described in 1841 as “a leaf which hangs over my head in the path—I bend the twig and write my prayers on it. . . . As if it were not kept shut in my desk—but were as public a leaf as any in nature.”4 Sophia Thoreau’s sprig of leaves was not intended for general circulation; it was a private matter, a quiet remembrance (her brother had died six years earlier). Yet these days it does circulate, in books, on Instagram, and now in the pages of The Magazine ANTIQUES. In all those contexts it acts as a memorial not only to Henry but to Sophia as well. These five leaves are a reminder, too, of how important it is to connect to nature—not just for its own sake, but as the place in which we all live, together.