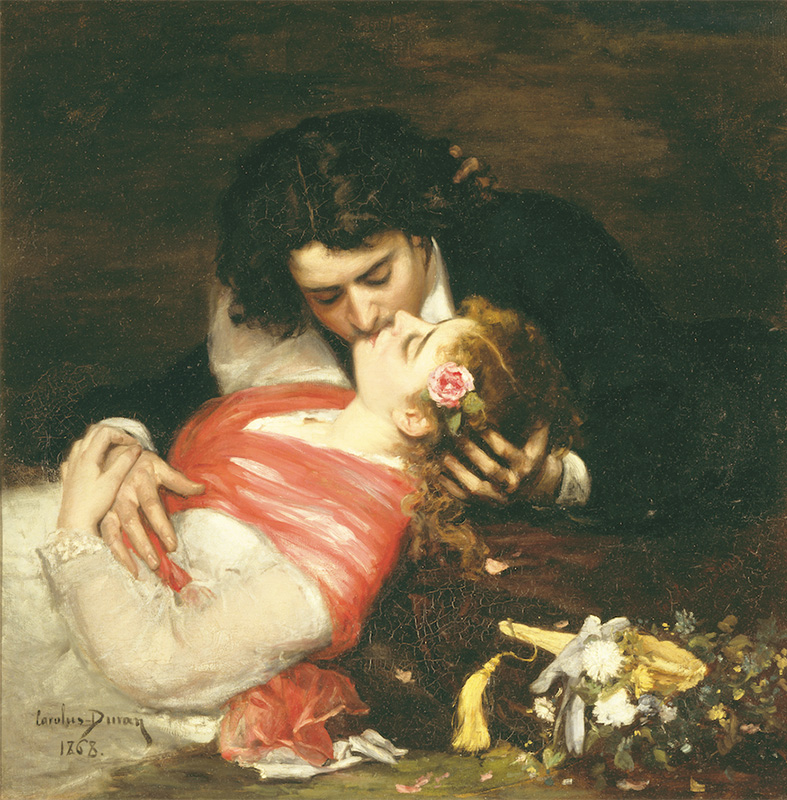 France is an enormous country—whose arts scene neither begins nor ends in Paris. Some of the best art museums in Europe are in small French cities from Normandy to the Riviera and from Brittany to the French Alps. Earlier this year I took a “No Paris” pledge and experienced rich, idiosyncratic museums roughly in a straight line, north to south, from Lille, at the northern tip of France near the border with Belgium, to Montpellier, a few miles from the Mediterranean. Along the way, I also visited Dijon and Besançon. “No Paris” is a revelation.

When I was in graduate school, the courtyard of the grand Palais des Beaux-Arts in Lille was overgrown with weeds. Fantastic art there and in Bordeaux, Rouen, Toulouse, and a dozen other cities reposed in ratty old buildings. These places had no visibility. They were controlled by bureaucrats in Paris, who saw the Louvre and the Musée d’Orsay as the crown jewels, all else an afterthought.

This changed in the 1990s. The French state decided to use art in what Parisians call “the provinces” to promote tourism and economic growth in these forgotten cities. The movement to rejuvenate the regional museums spurred a small revolution, sans guillotine.

Lille, with its Palais des Beaux-Arts, is a good place to start. It’s in the Hauts-de-France region—the French part of Flanders­—and this helps to define the museum. Often the local heroes, like Peter Paul Rubens, also became the most revered Old Masters; sometimes the locals stayed local and became regional stars, though highly accomplished ones. Rubens lived in nearby Antwerp, and Lille and Antwerp had close cultural and commercial ties for centuries. Borders were porous, and so was culture. From textiles to paintings to ceramics to sculpture, the museum’s collection has a strong Flemish feel.

Rubens’s huge Descent from the Cross of about 1617 commands the museum’s grand galleries. It’s joined by other great works by that artist and by his fellow Antwerper Anthony van Dyck. The wall text for Descent notes that it came to the collection via “revolutionary seizure,” explaining one facet of the museum’s history, and the history of most French provincial museums. Rubens painted Descent for the old Capuchin monastery in Lille as its premier altarpiece. After the French Revolution, new local regimes raided the art of lots of religious establishments on the road to shuttering them. Lille was one of fifteen French cities decreed by Napoleon to receive seized art.

Rubens wasn’t the last heavyweight from the neighborhood. Louis-Leopold Boilly was from a town near Lille. His portraits and patriotic paintings have a microscopic touch, with exact detailing and precise finish, leavened by humor and eroticism—cool French classicism. Carolus-Duran was also from Lille but a man from a different age. His Kiss of 1868 is hot and sexy. It’s no surprise to learn he was John Singer Sargent’s teacher.

The museum’s home today is a grand Belle Époque pile finished in 1892 that mimics the Louvre. It was purpose-built and supremely located on Lille’s main square. A snazzy renovation completed in 2017 tackled the museum’s atrium. It’s now a sleek gathering space with digital galleries, a café, and a shop.

Dijon is southeast from Lille about three hundred miles, but it might as well be in another country. Lille is a business city. It hustles and bustles. Near the train station are tall office buildings and a convention center. It’s on a crossroads, not far from Brussels, the European Union’s capital, and serviced by the Eurostar. Dijon is smaller and older. Its city center is resplendent with terra-cotta polychrome roofs from the seventeenth and eighteenth centuries. Once the seat of the Dukes of Burgundy, it oozes ancient wealth. And, yes, there are mustard shops everywhere.

Lille’s museum was one of the first to be modernized. The Museum of Fine Arts in Dijon is the most recent to be spruced up. In May it reopened following a $72 million renovation. Its sparkling facade is steps from the city’s airy, pedestrianized main square and in the heart of the city’s historic center. The museum is really a campus of eight old buildings, among them the medieval Ducal Palace, which has adjuncts that date to the Renaissance. The renovation project preserved the different architectural styles in each building so the art installed there, usually from the same period as the space, lives in happy harmony. In the Renaissance room, there’s a spectacular Moses Saved from the Water  by Veronese from about 1580, at home against a deep red wall. One building is that of the school of art founded in 1766, which now features impressive galleries for contemporary art on the upper floor.

There is a trove of altarpieces and sculpture from the golden age of the Dukes of Burgundy, from the 1380s through the 1440s, when the dukes were European potentates who could afford the best of everything from throughout France, Flanders, Germany, and Switzerland. Polychromed tombs of two of them are displayed in the space that was originally the palace’s dining room.

One of the biggest surprises was the work of the husband-and-wife team of François Rude, a romantic-era sculptor, and history painter Sophie Rude. Their work is wonderful—François focused on patriotic sculpture—but it’s so out of style they’re now known only locally or to connoisseurs.

Another surprise was the Dijon museum’s superb collection of twentieth-century French art, concentrating on the best of the School of Paris. It came from collectors Pierre and Kathleen Granville in two groups starting in the late 1960s. The Granvilles weren’t from Dijon but wanted to keep their collection intact. It’s smart giving. Their things won’t get buried in the vaults. The gift made Dijon a center for the study of this era.

I’d heard that nearby Besançon, the pretty watchmaking capital of France and close to the Swiss border, prizes the exquisite over the loud and flashy. That’s true. It’s a walled city that dates to the late Bronze Age within the oxbow of a river. The Museum of Fine Arts and Archaeology is lovely and intimate. Having opened in 1694, it’s the oldest museum in France. The interior was redesigned in the 1960s in a brutalist style, with sloping walkways and mostly concrete walls hung with a stunning selection of local antiquities and Old Masters. I never imagined that pictures as venerable as Giovanni Bellini’s Drunkenness of Noah, or a medieval altarpiece, or  Lucas Cranach the Elder’s full-length nudes would look good against concrete, but the rough, dull, gray surface suits them. In more traditional galleries I found a giant hunt scene by Gustave Courbet—Ornans, his home, is nearby—along with some over-the-top narrative pictures by local artists, and adorable chinoiserie paintings by François Boucher.

The ancient art, mostly found in nearby excavations, includes mosaics displayed on the floor with raised paths running alongside them, ancient armor, a mummified corpse or two, as well as tools and religious objects. I felt I was walking in the oldest of footsteps. Besançon’s museum was given a respectful renovation completed in 2018, its exceptional 1960s style freshened and modern amenities added.

If Besançon feels Swiss, Montpellier feels tropical. The city is not far from the sea nor from Spain, and it has a spacious central square drenched in sun and framed by a Belle Époque theater and palm trees. The Musée Fabre has accumulations of art from many periods, schools, and styles but it bears the stamp of a single—and strong-minded—collector: Alfred Bruyas (1821–1876).

The son of a rich Montpellier banker, Bruyas focused on the work of artists living in Paris in the 1840s and 1850s, when he spent most of his time there. His collection is a window on French art from Delacroix to the days before impressionism, anchored by the work of Courbet, Bruyas’s favorite. Fifteen paintings by Courbet are there, most notably Bonjour, Monsieur Courbet!, which shows the artist meeting the ginger-haired Bruyas.

Montpellier was the home of Frédéric Bazille  and his wealthy family. Bazille’s early death—he was killed in the Franco-Prussian War—came at a time when the young painter was already part of the avant-garde Paris clique of Renoir, Manet, and Monet. Some of Bazille’s best work soon came to the Musée Fabre. His View of the Village from 1868 is set near Montpellier. Growing up in Montpellier, where the weather is invariably nice, gave him a natural sense for high key color, figures set outdoors, and light that’s both clear and warm. Had he lived, he would have been a leader among the impressionists.

Lille, Besançon, Dijon, and Montpellier have all done cost-effective, art-friendly museum renovations. The changes respect the integrity of the original architecture and made room for contemporary art more-or-less unobtrusively. None seems aggressive, and none looks like a monument to anyone’s ego. Musée Fabre’s renovation around 2004 was probably the most focused on making space for new art and included a big new wing.

The Paris-based arts bureaucracy facilitated the rebirth of these museums. The state matched money raised by the local governments, and the big Paris museums gave art in their vaults to the provincial museums to fill holes. All of them now have good impressionist and post-impressionist work, for example.

Françoise Cachin, the head of the French museum bureaucracy, and Elizabeth Rohatyn, the wife of American ambassador Felix Rohatyn, partnered in the 1990s to harness American museum know-how on behalf of the local French museums. This was transformational. Both had vision, energy, passion, and connections. They organized FRAME, the French American Museum Exchange, a collaboration that began with nine American museums not located in New York, Chicago, or Washington, DC, and nine French museums not located in Paris. (There are now thirty-three institutions participating.)

FRAME was a success for years but it’s languishing. My sense is that the French museums feel they’ve learned everything they want to learn from their American counterparts. That’s fair. On the American side, collaborations with European museums don’t seem to carry as much prestige as they did, and the Old Masters aren’t seen as a draw. American museums are focused on entirely different themes now.

Judging from what I saw “in the provinces” this summer, though—sensitive, restrained renovations, a zesty love of quality, and a respect for heritage and history—the French might still have a few things to teach us.