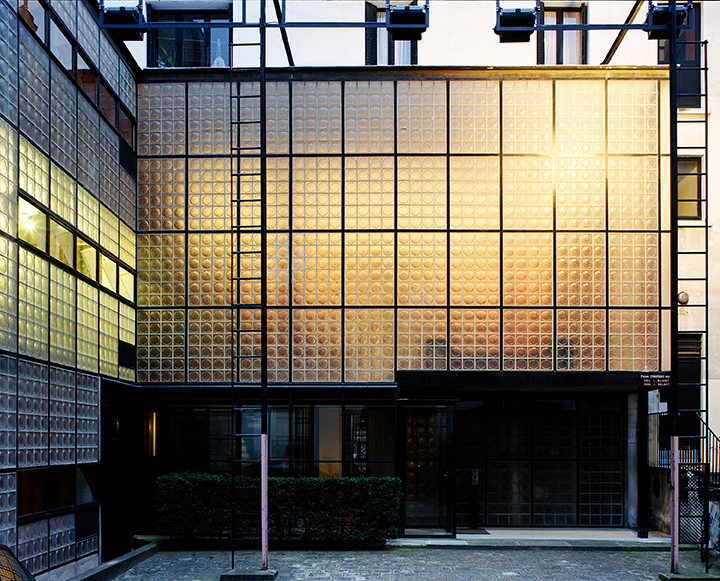 With its stunning façade composed almost entirely of textured glass blocks set in a steel framework, the Maison de Verre, or “House of Glass,” designed and built between 1927 and 1932, is one of the most remarkable buildings in Paris.  It is also one of the most difficult to see. The house is situated in a nineteenth-century courtyard off a narrow street in a quiet, elegant Left Bank neighborhood. The doors of the porte cochere that leads to the courtyard are generally kept closed. Students and architects, as well as those in related professions can apply (months in advance) to join one of the two weekly tours of the Maison de Verre. For those who don’t qualify, trash days offer the most opportune time to catch a glimpse of the place.

Though he was one of the great inventive figures in early twentieth-century French design, it has been difficult to get a proper perspective on Pierre Chareau, the architect of the Maison de Verre. “He has been almost invisible,” says Esther da Costa Meyer, a professor of architecture at Princeton University. “There was a show twenty-three years ago at the Centre Pompidou, and one in Tokyo in 2014. Only one museum in the United States displays his work.” But a new exhibition at the Jewish Museum in New York, curated by Meyer, puts Chareau squarely in the public eye. Pierre Chareau: Modern Design and Architecture examines the singular body of work—encompassing furniture, lighting, film sets, graphics, and housewares, along with architecture—and complex life of a man who synthesized the rich, classically based spirit of art deco and the pure functional aesthetics of modernism.

Details of Chareau’s youth are scant. He was born in Bordeaux in 1883, the son of a wine merchant who moved his family to Paris sometime in the late 1890s. He apparently flunked his entrance exam to the École Nationale Supérieure des Beaux-Arts—the famed French school of art, architecture, and design—and in 1899 went to work for Waring and Gillow, a British manufacturer with offices in England and France that made furniture for hotels, ocean liners, and similar concerns.

There, Chareau learned not only about furniture design and production but also about presentation and the arrangement of interiors. He was chief draftsman for the company when World War I broke out. After serving in the artillery corps, upon his discharge in 1919 Chareau opened his own design firm. By 1923 he had been accepted into the Société des Artistes Décorateurs, the elite association of French interior designers.

These were the creators of the art deco style. Their ranks included designers whose luxurious works referenced furnishings of the seventeenth century—like Émile-Jacques Ruhlmann, with his lavish materials like shagreen, ivory, and lacquer, and Paul Follot, with his gilded, stylized floral decorations—as well as more future-oriented spirits, such as architect Robert Mallet-Stevens and René Herbst, who created strong, simple, sleek, and functional designs.

As examples of his work in the Jewish Museum exhibition demonstrate, Chareau’s furniture would tread a middle course between “the calm gentility ofthe past,” Meyer says, “and the edgy tempo of modern life.” Some of his pieces have sweeping curves; the forms of others are hard and geometric. Chareau avoided excessive applied ornament in favor of rich surfaces: the grain of an exotic wood like striped Macassar ebony or colorful upholstery such as a tapestry designed by the artist Jean Lurçat.

One innovative quirk was that Chareau liked furniture with moving parts. These ranged from extendable desktops and suspended, swinging sofas and beds to folding chairs and pieces such as a bookcase and table joined by a hinge (Fig. 2). A favorite Chareau flourish was to create furnishings—room partitions, side tables that could expand and contract like a lady’s fan around a central pivot (Fig. 6). Chareau installed a device of this kind—it regulates the amount of light coming through an oculus—in the room he designed for the Société’s pavilion at the famed 1925 Paris Exposition Internationale des Arts Décoratifs et Industriels Modernes (Fig. 9).

Above all, Chareau was enthralled by what Meyer calls the “tension” between materials—hard and soft surfaces, contrasting colors, and furniture composed of smooth, highly polished wood and hand-wrought iron made by his frequent collaborator, the master metalsmith Louis Dalbet.

Chareau and his wife, Dollie, moved in Paris’s artistic and intellectual circles. They knew Picasso and Braque and were close friends with sculptor Jacques Lipchitz. The Chareaus collected modern art avidly, and several of Pierre’s best-known designs make a playful nod to cubism, such as that for a chair and sofa whose wooden frames form an open-ended hexagon. Another is a lamp he called La Religieuse, or “The Nun.” Its base resembles a long cloak; its shade, composed of triangular slices of translucent alabaster, suggests a white cornette-a nun’s wing-like headwear. (Cubism also had a brief, but potent, influence on Czech design in the early twentieth century.)

In 1927 Chareau was approached about a special project by two longtime clients: Jean Dalsace, a progressive-minded gynecologist and patron of the arts, and his wife, Annie, an accomplished amateur pianist. Annie’s father had given them an eighteenth-century courtyard house in the seventh arrondissement. They intended to raze and replace it with a modern building that would contain both medical offices and their residence.* They wanted Chareau to design it.

Having no formal training in architecture and engineering, Chareau would work over the next four years with the Dutch architect Bernard Bijvoet. The choice of textured glass and steel as primary building materials arose from Jean Dalsace’s overriding concerns for light, air, hygiene, and privacy. Within this envelope, Chareau and Bijvoet devised an ingenious interior featuring floating staircases, moving screens and partitions that change the shape of rooms, and assorted built-in storage units. The centerpiece of the design is the grand salon—a soaring, double-height space just behind the main glass block façade. At night, the Maison de Verre glows like an enormous lantern.

Chareau’s triumph was short-lived. By 1932 the effects of the Great Depression had begun to hit France hard. Design commissions dried up little by little. A harder blow came in June 1940, when Germany overran French forces and occupied Paris. Chareau’s mother was a Jew, and though he was raised a Catholic and did not identify himself as Jewish, the Nazis surely would. That year, Chareau left France for the United States by way of Morocco.

Pierre and Dollie Chareau lived a strange expatriate life in New York. He spoke little English. (She had been born and raised in London.) Jobs were few. They supported themselves in part by selling off pieces of their art collection. Chareau’s last major project began in 1947, three years before his death: the design of a combination dwelling and studio in East Hampton, New York, for the artist (and fluent French speaker) Robert Motherwell. To save money, the core of the structure was a prefabricated Quonset hut, which Chareau modified with elements like a glass wall made from a section of a greenhouse. As payment, Chareau was allowed to build a small cottage on the property for himself and Dollie.

Motherwell sold the place in 1952 to the publisher Barney Rossett, owner of Grove Press, who made the house the center of an artsy social scene, until he sold it 1980. Five years later, despite the efforts of architectural preservationists, Pierre Chareau’s last design was knocked down to make way for a shingle-style McMansion.

Pierre Chareau: Modern Architecture and Design is on view at the Jewish Museum from November 4 to March 26, 2017.

*Things did not go simply. The tenants living on the top floor refused to vacate, and their residency was protected by law. The upper levels of the building were shored up while the Maison de Verre was constructed beneath them.