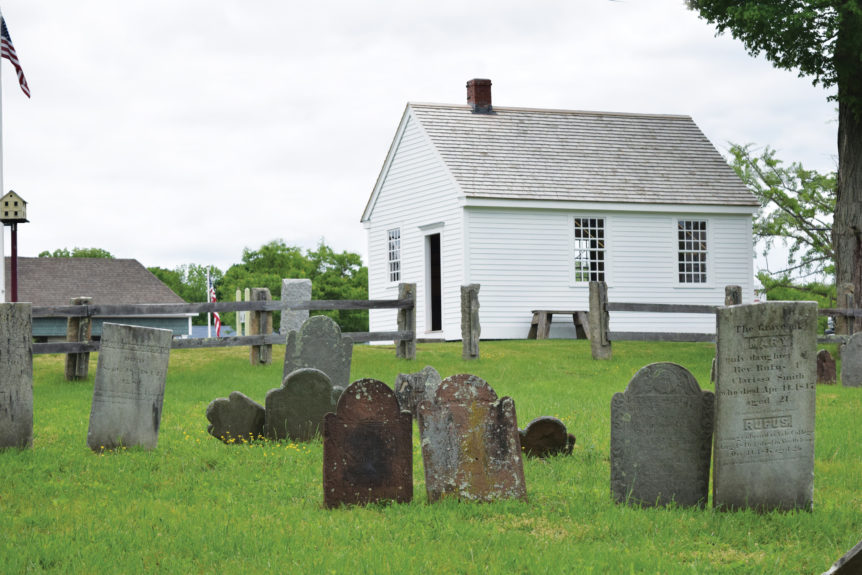 If you’re traveling along Connecticut Route 16, just south of Main Street in Colchester, you’re probably driving right over the location of the first school in the state founded specifically for African-American children. It stood there for nearly forty years, from about 1804 until 1840, when it closed due to declining enrollment. The school’s story contributes necessary details to the narrative of American history—and is a tribute to the community’s devotion to the past told in full.

View of the new replica of the school for colored children from Colchester’s Ancient Burying Yard. Photograph by Kevin J. Tulimieri.

The tale begins with a wealthy local landowner, Pierpont Bacon, who bequeathed funds to replace the area’s district school with a larger, more substantial academy for Colchester’s children as well as for boarders seeking a more advanced education. Though black children attended the original district school, when Bacon Academy opened its doors around 1803, the board of trustees decided to relocate the original school building and turn it into what was often known as the “school for colored children”—a move that might be considered emblematic of the paradoxical nature of race relations in Connecticut at the time. While slavery officially existed in Connecticut until 1848, by 1800, the majority of African Americans in the state were no longer enslaved. In creating the school, the trustees of Bacon Academy recognized the importance of education in preparing Colchester’s black children for freedom. Yet in taking this step, they also established a model for segregated education, says Connecticut historian Peter Hinks.

Nevertheless, the school was embraced by the black community in Colchester, and reputedly, parents from as far away as Washington, DC, sent their children to live with local residents so they could attend. Though no records survive, the school’s success can be gauged by those connected with it. Among its first teachers was Prince Saunders, who went on to become one of the foremost scholars and promoters of African-American education in New England (after Colchester, he taught at the famous African School in Boston) and later, in Haiti. Amos Beman, the ardent abolitionist and pastor of the Temple Street Church in New Haven, received his early education at the Colored School in Colchester.

The woodburning stove in the classroom, with desks made by the industrial arts students at Bacon Academy. Photograph by Eleanor H. Gustafson.

Happily, starting this summer, thanks to the generosity of several community members, most especially Arthur Liverant and his sisters, Linda Liverant Barger and Abby Liverant Gerrity, and their husbands, the story will be told in a new building that very closely replicates the long-lost original schoolhouse. It has been erected on Main Street in Colchester’s Historic District virtually singlehandedly by master builder William Treiss of Lost Art Joinery, who modeled it, as Liverant suggested, on the extant Gull School of 1790, just across the town line in Hebron, Connecticut, and an 1830s sketch of the town green that shows it in the background. An expert in restoration architecture with thirty-four years’ experience, Treiss built a traditional post-and-beam frame using native woods and installed wood-framed, twelve-over-twelve windows, wainscoting, wide floorboards, and period-appropriate cabinets, doors, and hardware. He employed thousands of feet of wood lath to create the plaster walls and arched ceiling, the beauty of which is exceeded only by its utility: its shape improves acoustics; the white color reflects light, and, in winter, heat from the stove; in warm weather, hot air rises to the ceiling, keeping the diligent scholars and their teacher below cooler.

Ellen Sharon, chair of the Colchester Historic District Commission, which oversees the project, says it’s been thrilling from start to finish. Members of the commission were brought nearly to tears, she says, by the Liverant family’s generosity. But many others have contributed too, with such gifts as a period schoolmaster’s desk and a historic map of the young United States.