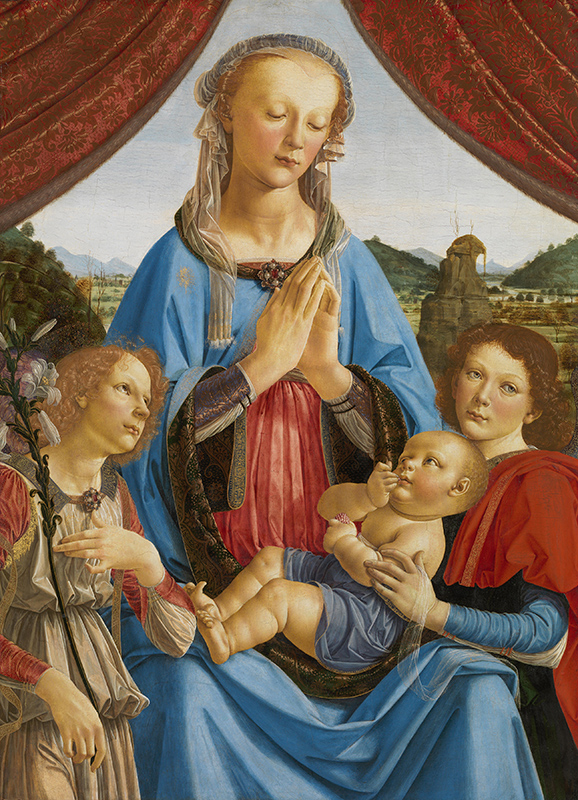 One can only admire the courage of any curator brave enough to mount an exhibition of Andrea del Verrocchio, that pioneering master of the Florentine Renaissance: his greatest sculptures cannot travel and almost every painting attributed to him has been the subject of heated and protracted debate. But a pair of Italian scholars, Francesco Caglioti and Andrea De Marchi, has risen to the challenge and mounted just such an exhibition at the Palazzo Strozzi in Florence. The show, modified and abridged, will move to the National Gallery of Art in Washington, DC, in September.

Perhaps an even greater challenge for the curators than questions of mobility and attribution is the fact that, although Verrocchio is clearly a very great artist, he is not an easy artist to love or even to
explain. While his paintings possess passages of obvious magnificence and beauty, his personality is usually that of a hard-nosed realist with little use for the Christmas-card enchantment that the modern museumgoer seems to expect from the masters of the Florentine Renaissance. Verrocchio is a painter of muscle and bone more than of dimpled winsomeness, a sculptor of power rather than prettiness. At the same time, his paintings cannot be identified with a dominant personal style as easily as can those of Fra Angelico in the generation before him or Sandro Botticelli in the generation that followed.

In consequence of that difficulty, Verrocchio is hardly as well-known as they or a dozen of his contemporaries, and in consequence of that obscurity, the present show has been titled Verrocchio, Master of Leonardo. This is accurate enough, since da Vinci began his career in Verrocchio’s studio. Although it will do as a marketing strategy, it seems to suggest that Verrocchio’s name and prestige are not in themselves a sufficient draw. Of course, that may indeed be the case, but as the art in this exhibition proves—through more than a hundred paintings and sculptures by Verrocchio and his most illustrious contemporaries—it shouldn’t be. For although Verrocchio introduced a new clarity and realism into Florentine painting between 1460 and 1480, and although he transmitted those qualities to Ghirlandaio, Botticelli, and Filippino Lippi, he was a great artist in his own right.

The way art history is usually taught, Verrocchio, a goldsmith by training, was a second-tier painter who, in his Baptism of Christ, was so upstaged by the young Leonardo’s depiction of an angel on the left, that he gave up painting altogether. In fact, as the Strozzi exhibition proves, Verrocchio continued painting until the end of his life. It is true that in that work, as well as in his Tobias and the Angel (right), a certain compositional clumsiness suggests that painting was not his preferred medium. But one has only to look at Verrocchio’s great Volterra Madonna, shown above, to dispel any doubts that we are dealing with a master. The mother and child are flanked by two angels and framed by crimson curtains that open to reveal a typically Tuscan landscape behind them. The fineness of detail in the hands and hair, the vibrancy of the colors, flooded with the light of noon, would go on to exert an overpowering spell on the succeeding generation.

The excellence of this and other paintings by Verrocchio would easily establish him as paramount in any other artistic context than Renaissance Florence, where even greater masters easily surpassed him. The same, however, can never be said of Verrocchio’s sculpture, in which he was rarely equaled and never surpassed. Consider his David Victorious. It has none of the sinuous eroticism of Donatello’s treatment of the biblical hero from one generation before, nor that superhuman monumentality that Michelangelo imparted to him one generation later. Instead, this weedy adolescent has been conceived with admirable clarity and realism in the service of a plausible and compelling fortitude.

And then there is the great Colleoni monument that Verrocchio created for the square beside the church of San Zanipolo in Venice, an equestrian statue whose force and passion, just barely contained, stand in marked contrast to the superb classical balance of Donatello’s Gattamelata statue from nearly forty years before. This one work, entirely by itself, feels like an entire epic poem. Unlike David, this masterpiece could not be included in the present exhibition: but it will amply confirm the renewed prestige that this neglected master will surely win in the wake of the Strozzi exhibition.