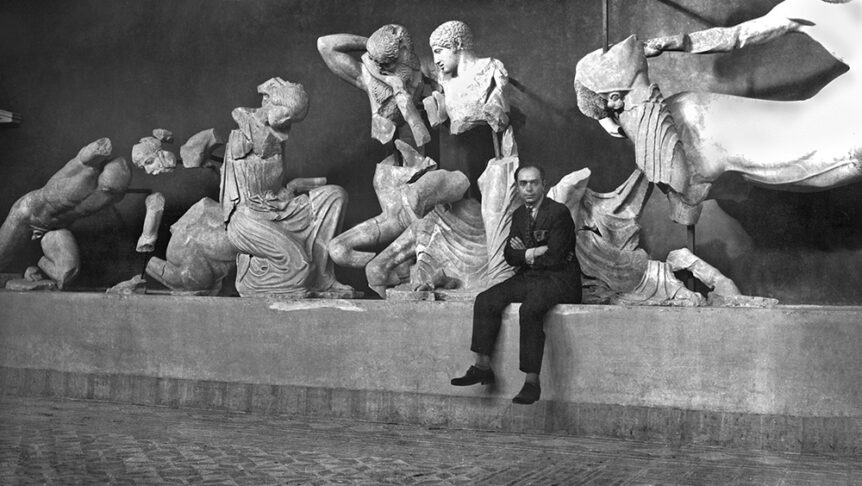 The world has largely forgotten about José Fioravanti and the reasons are quite clear. An Argentine son of Italian immigrants, Fioravanti (1896-1977), in addition to producing some skilled portrait busts, created monumental public sculptures—a genre held in relatively little esteem today—and he did so in a moderne idiom that we tend to view with commensurate indifference. Although he spent several years in Paris, his best work can be seen on the streets of Buenos Aires, a capital that stands at the periphery of the world’s attention. But a new show in that city’s Casa Victoria Ocampo, José Fioravanti, Classicismo y Modernidad, reveals that this sculptor was capable of remarkable work that fully justifies a second look. The exhibition, organized by the Casa Museo Magda Frank, is accompanied by an excellent and beautifully illustrated catalogue written by Ana Martínez Quijano.

It is true that Fioravanti is not always at his best: in his static, hieratic, and often frontal forms, a thin and subtle line separates monumentality from banality. Our contemporary eyes, no longer accustomed to such work and even suspicious of it, need a period of adjustment to appreciate that crucial distinction.

Like the moderne style in general, which occupied an important corner of European visual culture from 1920 to 1950, Fioravanti seeks a compromise between the classical grandeur that defined nineteenth-century official sculpture and the formal economy of the modernism that followed. At their best, his human figures possess a latent energy that seems to be trapped within the stone itself. This energy leaps from one form to another in those series of statues—the monuments to Nicolás Avellaneda (1935) and Roque Sáenz Peña (1936), two early presidents of Argentina—that are his best and most ambitious works.

Like much of his statuary, these limestone giants were created in France and then shipped to the New World: given that Argentina is singularly poor in native stone, Fioravanti drew his materials, and much of his enthusiastic inspiration, from the inexhaustible quarries of Burgundy. Such is the quality of the stone that, even if the general human form dominates the sculptor’s attention, striking details come unexpectedly into focus: Avellaneda’s beard, or the thick hands with which Sáenz Peña grasps a book to his heart.

Fioravanti was not always soberly monumental. Like Bernini’s elephant in front of Rome’s Santa Maria sopra Minerva, Fioravanti’s famous pair of sea lions in Mar del Plata (1941) have reared their pleated torsos for generations beside the waters of the South Atlantic. Unfortunately—and this is the usual fate of the public sculpture in which Fioravanti excelled—few of the bathers who flock to that summer resort, who have grown up with these iconic forms and have always loved them, would ever trouble themselves to learn the identity of the gifted man who made them. The present exhibition and, even more, the catalogue that will endure beyond it, are a welcome antidote to that indifference.