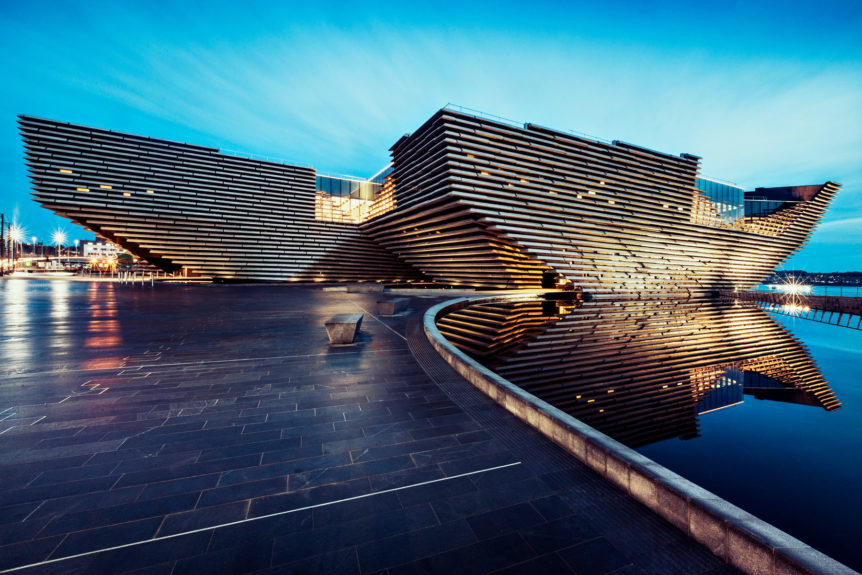 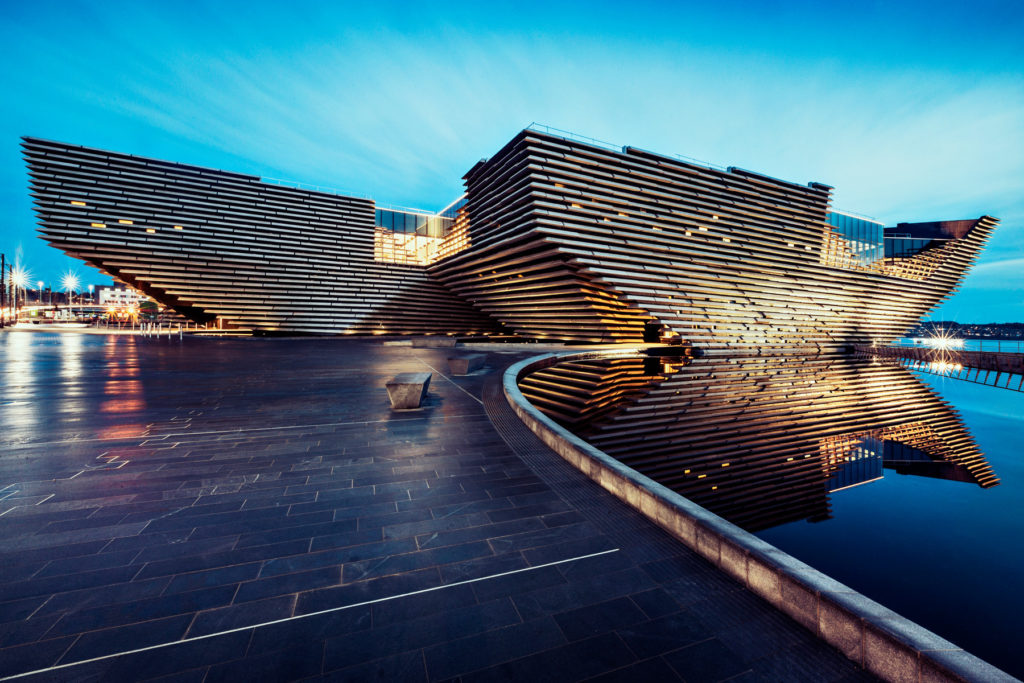 Exterior of the new V&A Museum Dundee in Scotland. Photograph © Hufton+Crow. All photographs courtesy of the V&A Dundee.

It’s good to stand in a new civic building like the V&A Dundee and feel the well-earned pride of people who’ve done something grand. Not just the curators, the rest of the staff, the local officials, and the building team. The new museum enlisted the entire city. For them, it’s a measure of Dundee’s future.

The museum is a triumph of imagination and grit. Once an industrial powerhouse, Dundee is reinventing itself: conceiving a new economy, engaging the old city with its waterfront, and repairing a 1970s redevelopment heavy on willy-nilly demolition and brutalist style. The building evokes the union of land and water, inspired by the coast of Scotland and its shipbuilding past. It focuses on Scottish design history, the sole national museum to do so. It also marks a pivotal move of the Victoria and Albert—its brand, expertise, and credibility—to outside London for the first time.

The roughly $105 million building sits on the banks of the River Tay flanked by a new commercial district and the Discovery, the Dundee-built ship that carried Robert Falcon Scott and Ernest Shackleton’s first, successful Antarctic mission. Dundee was once acclaimed the city of “jute, jam, and journalism.” Jute processed here was the ubiquitous material for rope, burlap, and canvas. A Dundonian cou.ple first marketed marmalade from a batch of bad oranges bought in a swindle. For years, Dundee was Scotland’s publishing capital. Its big jute and jam factories as well as its shipyards are gone, but it’s still a media mecca and university town with visible Victorian bones. Its local persona is friendly, yes, but formidably inventive and resilient. 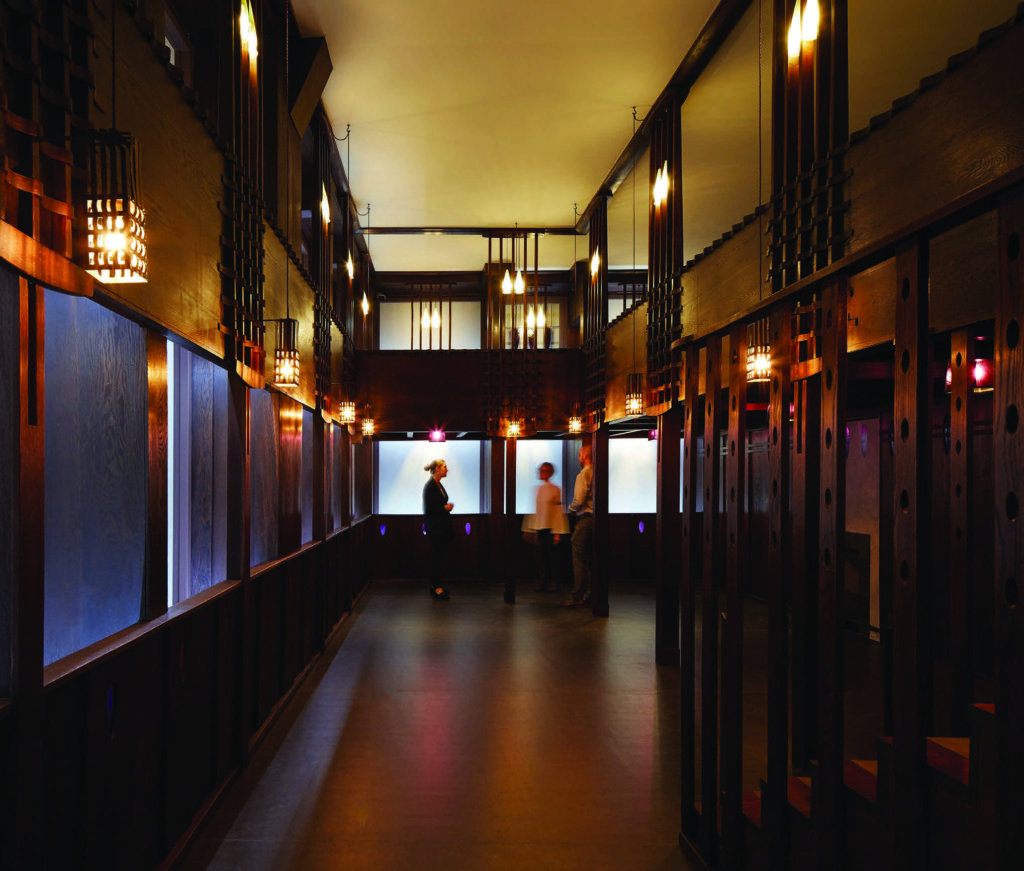 The museum has been aptly called “the city’s living room.” Though I have a traditional view of museums—they’re for art, and the quicker you see it, the better—I know the building isn’t a traditional museum. It’s a community center, too. People move easily in the spacious, open ground floor as they meet, shop, gab, eat, play, come, and go. Acoustics are blissfully good. The feel is informal.

Ship motifs run throughout the building, inside and out. The mass itself suggests a ship whose prow juts into the Tay. It’s made from two inverted pyramids twisting as they rise to join like parts of a wave. Its concrete exterior panels—there are twenty-five hundred of them—create an impression of crags on a bare cliff. It’s an attractive, compelling design incorporating an indoor/outdoor space. Outside, visitors are guided to the entrance via a walk by the waterfront in full view of the Discovery. Inside, the open main staircase wraps around the atrium. It looks like the grande descente of a luxury liner. Adding to the many ship-related grace notes, the staircase’s gray faux metal siding is faced with rivets. The museum’s handsome dark limestone floors are dotted with sea fossils. The exit deposits visitors back on the edge of the river. 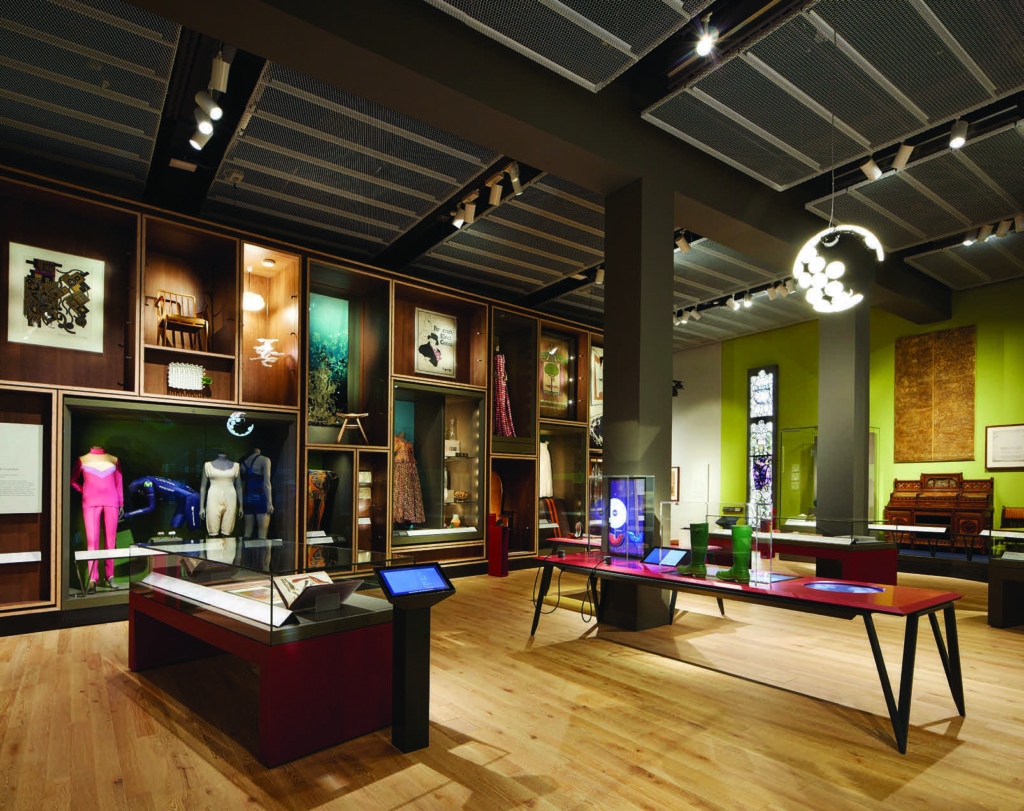 The Scottish Design Galleries put furniture, fashion, architecture, and more on display to explore the historical evolution of design in Scotland. Photograph © Hufton+Crow.

The main business of the museum happens on the next and top floor. The Scottish Design Galleries cover centuries of art drawn mostly from the V&A. It’s well done, with insightful emphasis on textiles, Robert Adam, the modernist Glasgow aesthetic, and the unmatched Scottish genius for industrial design. Charles Rennie Mackintosh’s Oak Room from about 1908 is there, one of Scotland’s great interiors. Stored in hundreds of pieces for years, it’s now conserved and reassembled. Once the heart of Miss Cranston’s Ingram Street Tearooms in Glasgow, its warm, dark wood and sparkling stained glass are heartening to see in the aftermath of the recent fire that destroyed the Glasgow School of Art, for which this Tearoom was a precedent.

I wish the design galleries were bigger. On opening day, the longest lines were there. People appreciated their exacting relevance. These spaces are not only about the past. They’re about what we see and how we see today. I’d quibble over the density of the display. Some might find it doesn’t promote focus.

This isn’t an encyclopedic big city museum. First of all, it’s not a big building. Standing most anywhere, much of the space is comprehensible. Each spot offers multiple views, one of many features giving the place an inviting, accessible scale.

The top floor also has lovely rotating exhibition galleries. This is important. These are flexible, grand spaces, tall enough to accommodate almost anything. Clearly, the architect, Kengo Kuma, and the curators worked closely together. With the building done, people will come once to see it: the structure is a novelty. Good exhibitions, though, will keep people coming. The plan is to present two to three major new shows each year. Some will come from the Victoria and Albert in London; some, the scholarly staff will develop. The first show is the superb Ocean Liners: Speed and Style, an exhibition organized by the Victoria and Albert and the Peabody Essex Museum in America. 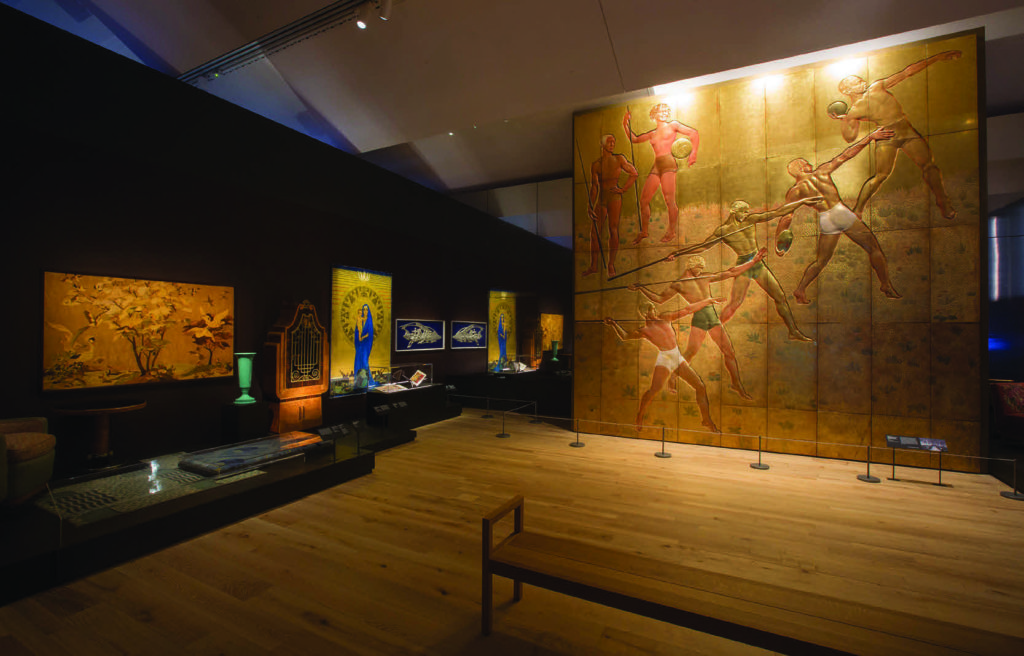 Installation view of Ocean Liners: Speed and Style, the first exhibition to explore the design and cultural impact of the ocean liner on an international scale and V&A Dundee’s inaugural exhibition. Photograph by Michael McGurk.

The museum has the entrepreneurial spirit and curatorial wisdom to mount the best shows. I hope its financial model allows for exciting programs because that’s what it needs to keep the buzz going. If it runs into financial headwinds, the worst thing it can do is axe new programming. It’s a branch of the Victoria and Albert—its first baby, so to speak. Involved, too, are the central government in London, the Scottish government, the city, which owns it, Scottish cultural agencies, and, critically, private philanthropy. All have a duty to keep it successful.

The museum is a teaching institution, too. It has a well-equipped learning center with classrooms and a nice auditorium. There’s also a clever space for experimental shows. Scotland is still a design hothouse. Dundee is a video-game center but young Scots everywhere are divining new ways to mold what our eyes see. The museum has a new artist-in-residence program. A design artist will visit every six months, working in studio space that’s practical, not plush.

The choice of Kuma as the architect seems odd at first. He’s Japanese, not Scottish, and the museum celebrates Scottish design. He’s a good choice, though. He has plenty of museum experience, and, philosophically, works best with sites close to water. Japanese aesthetics aren’t foreign to Scotland. The Mackintosh circle assiduously absorbed them. The Scots were never shy about taking the best of any culture and making it uniquely theirs. In any event, a new building is only as good as its client. In this case, the client is the city of Dundee, which shows it has a sound feel for the town’s possibilities and quite an impressive sense of flair.