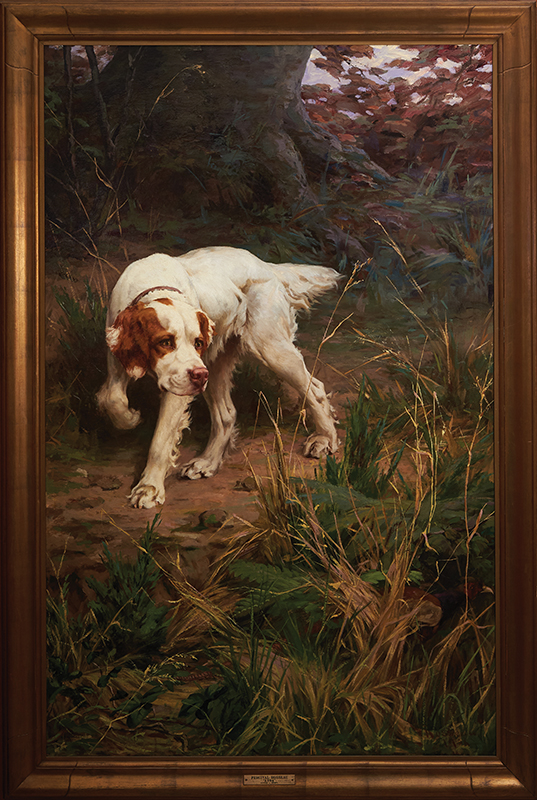 Given the times, you might expect an artwork titled A Group of Percy Bitches, currently on exhibit in midtown Manhattan, to be a paean to female empowerment. In fact, the painting at the American Kennel Club’s new Museum of the Dog in New York is a portrait of domestic bliss. Seven sad-eyed female fox terriers cavort in their pen in Rugby, England, captured in detail by the painter Henry Frederick Lucas Lucas in 1900. The dogs’ names are painted on the back, says Alan Fausel, the museum’s executive director, as he takes the painting from the wall and flips it around to reveal “Dairymaid,” “Ruby,” “Needful,” and the rest. 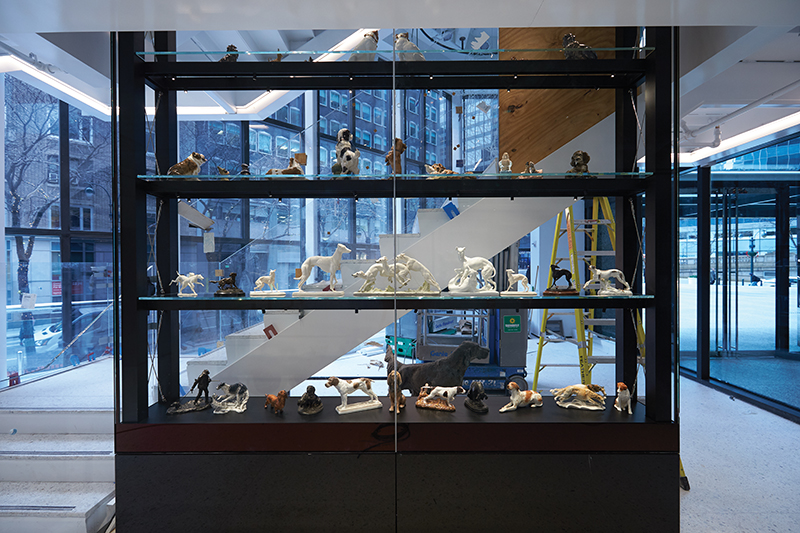 What’s obvious is the profound pride and affection felt by the terriers’ owner—a sentiment encountered over and over at the Museum of the Dog, where the story of humankind’s warm attachment to its canine best friends is told through a fascinating selection of paintings, posters, and other objects from the kennel club’s seventeen hundred–piece museum collection. “The museum visually explains our love of dogs,” says Fausel, who has organized sales of dog art for the auction houses Doyle and Bonhams, and appeared on Antiques Roadshow for twenty-three years. Among the exhibits are a 30-million-year-old fossil skeleton of a canine forebear that’s a bit smaller than a modern chihuahua, and a paw print preserved in terra-cotta from ancient Rome.

The museum’s glass and steel exhibition space on Park Avenue, within a cultural district bounded by the Morgan Library downtown and the New York Public Library a couple of blocks to the west, bristles with hightech displays and next-generation storytelling gear. Silhouettes of rottweilers and affenpinschers prance in a conformation show projected on a frieze in the lobby, and a street-level TV studio, similar to the Today show’s, will soon host live broadcasts starring pups that will no doubt draw an audience on the sidewalk. 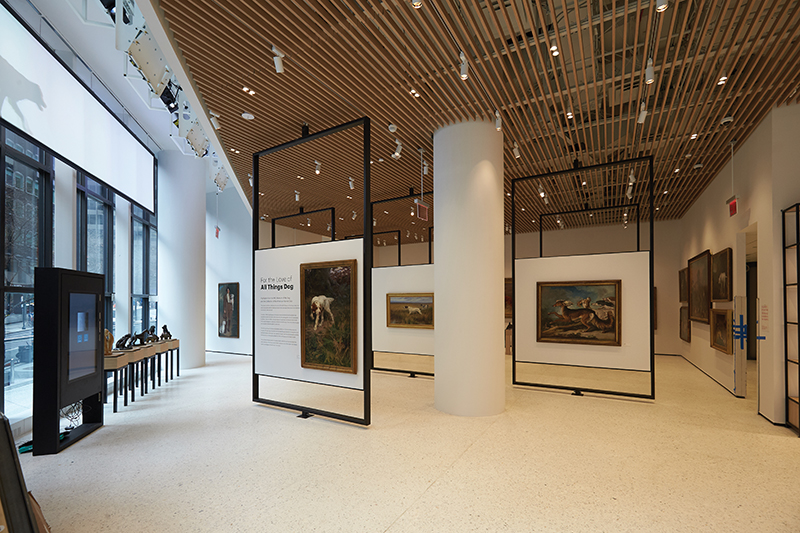 A view of the museum’s first exhibition, For the Love of All Things Dog: Highlights from the AKC Museum of the Dog and the Collection of the American Kennel Club.

Artifacts such as fiercely barbed antique spike collars— which originally were worn to protect dogs from wild beasts, not to intimidate the neighbors—and a dandy Victorian children’s dog cart are on view. Porcelain pooches by Meissen and Royal Doulton and other makers fill a two-story glass vitrine that rises in the atrium. But the cold nose and warm heart of the museum are the dozens of examples of Anglo-Saxon sporting art donated by members since the club’s founding in 1884. “A substantial amount of it is much like English art itself—portraiture,” Fausel says. “From the seventeenth century on, it’s predominantly Van Dyke and Rubens, and then Reynolds and Gainsborough. It was only natural: if they’re going to paint the people, they were also going to paint their horses, and their dogs. In a sense they were memorializing their ancestors of all types.” 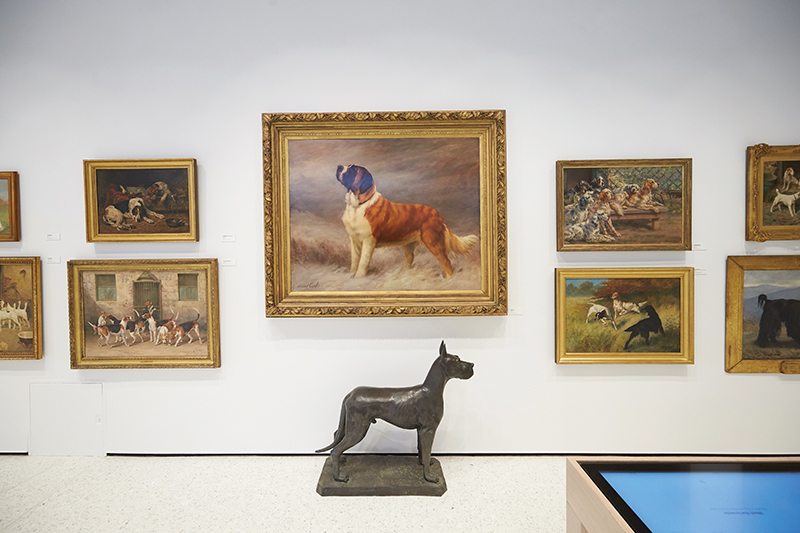 An array of dog portraits in the Museum of the Dog.

Best in show at the museum’s inaugural exhibition, For the Love of All Things Dog: Highlights from the AKC Museum of the Dog and Collection of the American Kennel Club, is a toss-up between American artist Percival Leonard Rosseau’s Leda, an astonishingly anatomically correct depiction of the artist’s own English setter stalking prey in a forest, painted in Paris in 1906, and any of the handful of works in the show by British painter Maud Earl. In I Hear a Voice, from 1896, a St. Bernard lifts her head the better to hear the cry of an Alpine traveler in need, and in Silent Sorrow, 1910, Earl gives us Caesar, the fox terrier of Edward VII, who lingers at his deceased master’s chair after he has gone. 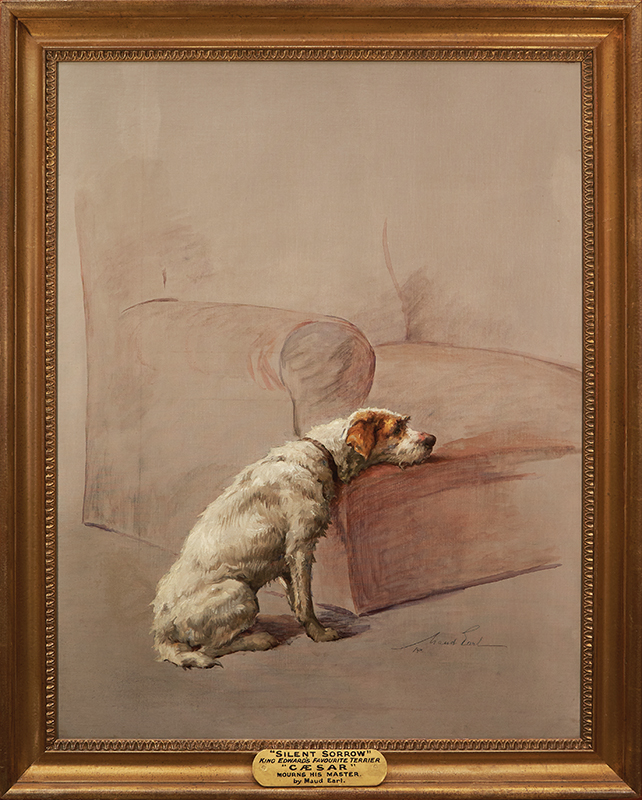 Founded in 1982 and first located in the lobby of the New York Life Building on Madison Avenue, the museum moved in 1987 to a historic house outside Saint Louis, where it spent three decades. Now back in New York and open since February, the museum has grown to include exhibits on all aspects of breeding, training, and responsible ownership of pure-breed dogs. But Fausel hopes most of all to thrill a new and larger audience with art. “You can go to the Metropolitan Museum and you might see a mythological scene or a historical painting that may not resonate,” he says. “Here people actually get into paintings in a very accessible way—because of the love we have for dogs.”

The American Kennel Club Museum of the Dog is located at 101 Park Avenue in New York City.