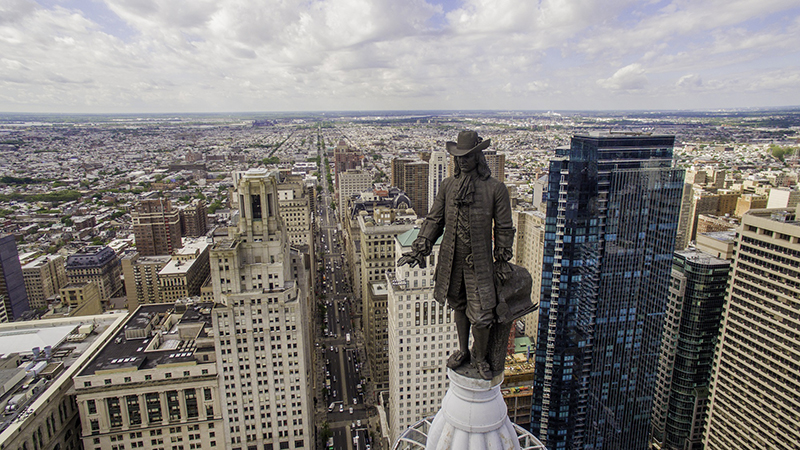 Downtown Philadelphia is organized around a Calder family retrospective. It was my Uncle Fred, who has lived in the city for more than fifty years, who first pointed this out to me. We were standing in the Great Stair Hall of the Philadelphia Museum of Art, just beneath Alexander Calder’s mobile Ghost (1964), a composition of kite-like white shapes dancing along a delicate tracery of metal rods. Looking outside, right down the Benjamin Franklin Parkway, we could see Logan Circle. There, Fred told me, is the Fountain of the Three Rivers—the Delaware, the Schuylkill, and the Wissahickon—each represented by a sleek Native American nude. It was sculpted by Alexander Stirling Calder, the mobile maker’s father.

Further along, on the same axis, we could see the looming hulk of City Hall—America’s largest municipal building—and just visible atop it, a figure in bronze: Philadelphia’s founder, William Penn. More than thirty-six feet tall and weighing in at some twenty-seven tons, this is the work of Alexander Milne Calder, Stirling’s father, who would likely be astonished to find that most Philadelphians today have never heard of him, while his grandson is virtually a household name.

His statue, though, is well known. The massive sculpture was erected atop the building 125 years ago, in 1894, and after that there was a longstanding “gentlemen’s agreement” that no building in Philadelphia should be any higher than Penn’s hat. When this unwritten rule was broken in 1986, the local sports teams suffered a championship drought that finally ended in 2008 with the Phillies’ victory in the World Series.

This familial sculptural arrangement, perhaps appropriate in the City of Brotherly Love, is intriguing in several respects, not least for the way it reprises art history in miniature. From our standpoint at the museum, my uncle and I could see art history scrolling backwards: from modernist abstraction to stylized art deco to antiquarian realism. And there is another, perhaps even more interesting way to look at that trajectory, one grounded not in style, but rather the politics of production.

To tackle this subject, it’s helpful to take a quick detour south, to Washington, DC. Late in his life, Alexander Calder (the grandson) was commissioned by the National Gallery of Art to make a sculpture for its new I. M. Pei–designed East Wing. Calder proposed a mobile, enormous even by his standards, that would barely clear the building’s walls as it rotated. He suggested using one of his regular fabricators—the Biémont iron foundry in Tours, France—but the museum opted instead to hire Paul Matisse, grandson of Henri, to execute the work, using aluminum to reduce weight. Calder sent along a little handmade model, as was his custom. From long experience, Biémont would have known to render his snipped metal prototype into a clean, attenuated, abstract form. Lacking this implicit understanding, Matisse and his team carefully measured its every accidental feature and then enlarged it at 1:32 scale. The result is something like a Claes Oldenburg version of a Calder, its enormous hangers articulated like wire hand-twisted by a giant. Calder himself did not live long enough to see it installed.

If this story suggests the risks of outsourcing to fabricators, the monumental sculpture of Penn is a reminder of just how effective it can be. Alexander Milne Calder may have been its nominal author, but the majority of the credit should really go to Tacony Iron and Metal Works, the Philadelphia foundry that hollow-cast the work in thirteen pieces, hauled it to the site, welded it together, hand-finished the seams, and rigged it up into the sky. In fact, massive as it is, Penn was just the project’s hood ornament. Tacony also fabricated the iron skeleton inside the majestic clock tower on which Penn stands, as well as twenty-eight Corinthian columns and myriad sculptures surrounding the base of the dome, among them four
gigantic eagles with individually cast metal feathers.

As historians Philip Scranton and Walter Licht note, Tacony accomplished all this prodigious making with an artisan approach, based on  “personal scale, renowned teamwork and obvious virtuosity.” This was not enough to insulate them against economic pressures, though. In 1910, after thirty years in business, the firm closed its doors. To add insult to injury, the building burned just four years later, while being used as the set for a silent film aptly entitled Gods of Fate.

Of course, the Calders were not unusual in relying on external foundries to realize their visions. That has been a critical dimension of sculpture since the Renaissance. What’s particularly fascinating about the line of sculptures in Philadelphia, though, is the way that they trace the interdependency of craft and fine art. The Tacony works may have failed, but foundries in Philadelphia and elsewhere remained vital supports for sculptors, achieving bespoke results at “industrial” scale. Alexander Stirling Calder collaborated with firms such as Roman Bronze Works, in New York City, and the Gorham Manufacturing Company, in Providence, while the mobiles and stabiles that made his son famous were usually made by two trusted workshops—the aforementioned Biémont, and the Segre Iron Works in Waterbury, Connecticut.

These days, the art world tends to treat fabricators much like the Victorians treated children: seen, but not heard. Often their very identities are closely guarded, like trade secrets back in the days of the guilds. It’s easy to see why: sculptors and their gallery representatives may not feel comfortable sharing credit, and may also want to retain exclusivity around certain technical processes. Even so, the role of fabricators should be better known and better appreciated. So, spare a thought for the Tacony iron workers, who put fifty-three thousand pounds of Brobdingnagian Quaker more than five hundred feet in the air. If anyone deserves a higher profile, it’s them.