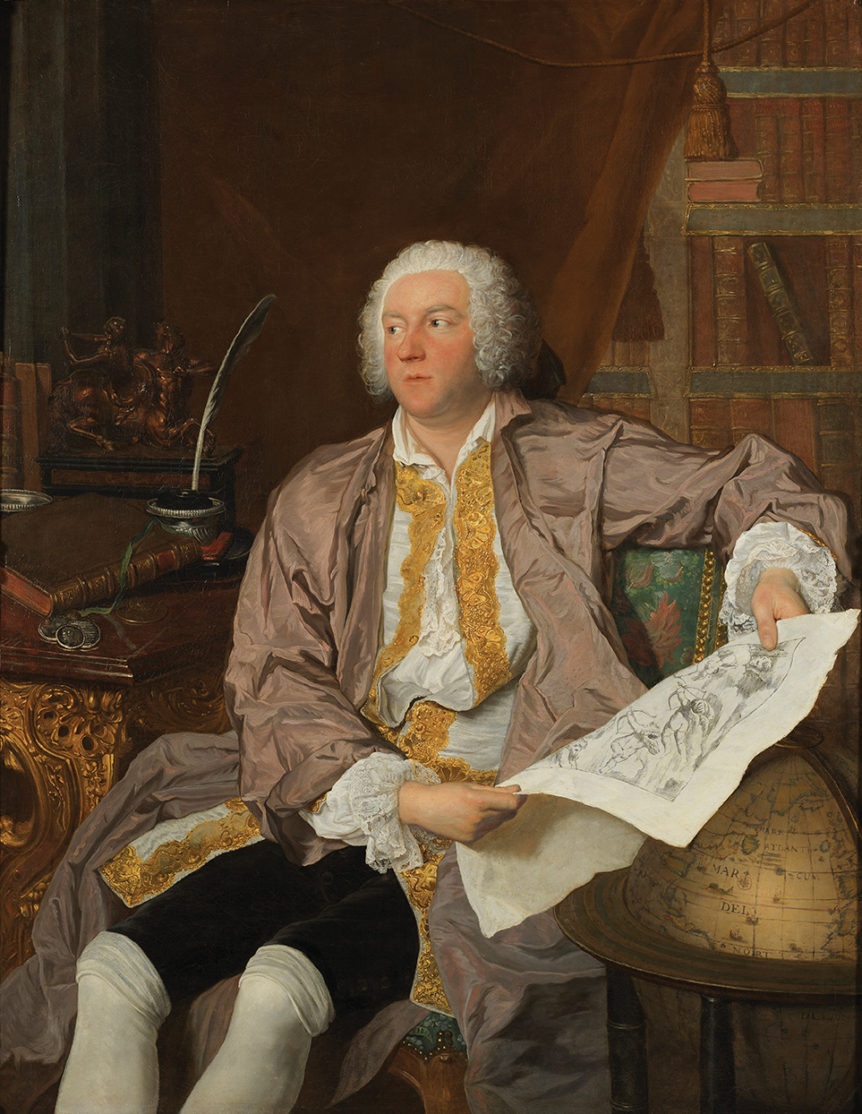 In the brilliant personage of Carl Gustaf Tessin we find refracted, as by a prism, the light of two nations, France and Sweden, at a specific instant in their cultural evolution. A diplomat, statesman, and author, Count Tessin is most famous today as an art collector and patron. While living in Paris, he bought up paintings by the hundreds and drawings by the thousands, and his collection makes up the core of the Nationalmuseum in Stockholm. While that museum undergoes renovations, some of Count Tessin’s finest acquisitions, seventy-five paintings and drawings in all, will be on view at the Morgan Library, while others recently appeared at the Louvre.

Count Tessin’s appeal, and the appeal of the Morgan exhibition, consists less in his transcending his age than in his thoroughly embodying its dominant themes. For nothing seems to define the ethos of Sweden in the first half of the eighteenth century more than its hankering after French culture, and French culture never seemed more fully or purely distilled than in the ursine embrace of its neighbors to the north. England, Holland, Italy, and Spain all learned from France in this period, but French influence penetrated their borders only to encounter powerful and self-confident national cultures. By contrast, the kingdoms of northern Europe, especially those of Prussia, Russia, and Sweden, exhibited an unparalleled receptivity to French influence and an appetite for it that nearly surpassed, in vigor and zeal, that of the French themselves. It was a specific version of French culture, however, that they imbibed: the culture of the rococo (that terminal phase of the baroque) that was beginning to suffuse the French court at precisely the moment when, as a young man, Tessin arrived in Paris—on his way to Rome—in 1714.

Tessin was born into a bourgeois family, one of the most artistically engaged in Sweden. His father, Nicodemus Tessin the Younger, was the architect responsible for the Stockholm Palace, while his grandfather Nicodemus Tessin the Elder designed the royal palace at Drottningholm. Both structures are imposing achievements, but the severe, almost Lutheran rectitude of their simple lines and even simpler massing suggest an unwillingness on the part of the architects themselves, and of the Swedish nation as a whole, to embrace the swerving grace and élan of their Gallic sources. That fuller, almost carnal encounter with the dominant culture of France was to be embodied in the person of Count Tessin, perhaps the main conduit by which French influence entered Sweden throughout the
better part of the eighteenth century.

Today it is easy to forget that, under Charles XII at the beginning of the eighteenth century, Sweden was a great power whose imperial ambitions were viewed with fear and apprehension throughout Europe. But after the Treaty of Nystad ended the disastrous Great Northern War in 1721, Sweden ceded such ambitions to Russia and would never regain its squandered eminence. And so, turning its gaze away from the north and the east, it began to look south, to the softer promptings of France and Italy. This was the geopolitical reality in which Count Tessin came of age. Although he had been expected to become an architect like his father and grandfather, he was drawn early on to politics and eventually to diplomacy. In addition to his travels to France and Italy during his Lehrjahre, he served as an ambassador in Vienna in 1725 and again in 1735 –1736. But his main consequence as a cultural figure is related to his post of ambassador extraordinary in Paris from 1739 to 1742, before he was dispatched to Berlin in 1744.

One of the most splendid works at the Morgan is a portrait of Tessin (Fig. 1) by Jacques-André-Joseph Aved, a much underrated French portraitist of Dutch descent. Here we see Tessin in all his glory. Any hint of northern provincialism has melted away and, but for his ruddy Swedish complexion, he looks like a Frenchman born. This winsome portrait d’apparat depicts the diplomat amid his quills and gilded tomes, with a globe on one side—suggesting his ambassadorial activities—and a writing desk whose ormolu accents rhyme with the gold brocade of his loose-fitting shirt.

This portrait is only one of the splendors in the Morgan exhibition. Tessin, by his own admission, suffered from what he called tableaumanie, a veritable mania for paintings. Together with the Comte de Caylus and Pierre-Jean Mariette, he was one of the legendary collectors of his generation in the first half of the eighteenth century.

The Aved portrait is one of three works that Tessin commissioned and that were shown in the Salon of 1740, the other two being Jean-Baptiste Oudry’s Dachshund Pehr with Dead Game and Rifle (Fig. 4) and François Boucher’s The Triumph of Venus (Fig. 3). If there is one painting that expresses the most essential aspirations of French official culture in the first half of the eighteenth century, it is this latter work. Just as Louis XV was a less somber and menacing monarch than his great-grandfather Louis XIV, so this delightful work tames the thunderous pathos of the baroque, turning its favored motifs into a thing of silvery grace and charm. Based ultimately on Raphael’s Galatea, with hints of Titian thrown in, the sylphlike deity of the title, framed by the froth of the sea and the churning, sunlit clouds, is surrounded by svelte and very Parisian nereids, as well as doves, airborne angels, and Tritons.

Equally typical of that time and place, but in a very different, almost realist key, is Chardin’s great Morning Toilet (Fig. 5), one of six works by the artist in the Morgan show. With no recourse to mythology or phantasmagoric palette, the artist achieves as powerful an enchantment as Boucher’s in his depiction of a young mother and daughter, dressed up and almost out the door, flanked by their perfume pots, a pewter jug, and a porcelain stove.

Although Count Tessin eventually fell heavily into debt due to his compulsion to collect art, he collected, on the evidence of the Morgan exhibition, with rare, almost infallible discernment. That a man of his time could display such taste in not only contemporary art—that is, Boucher and Chardin—but also in older artists like Rembrandt and Annibale Carracci, to say nothing of Albrecht Dürer and Quattrocento Italians like Domenico Ghirlandaio, reveals an astonishing critical acumen that is rare in any age. Tessin could almost have been describing himself when he wrote, of his friend and rival, the Comte de Caylus: “There is no one in France who knows Paris better or has a greater love of the arts and sciences, and perhaps no one in Europe with a finer taste.”

Treasures from the Nationalmuseum of Sweden: The Collections of Count Tessin is on view at the Morgan Library & Museum from February 3 to May 14, 2017.