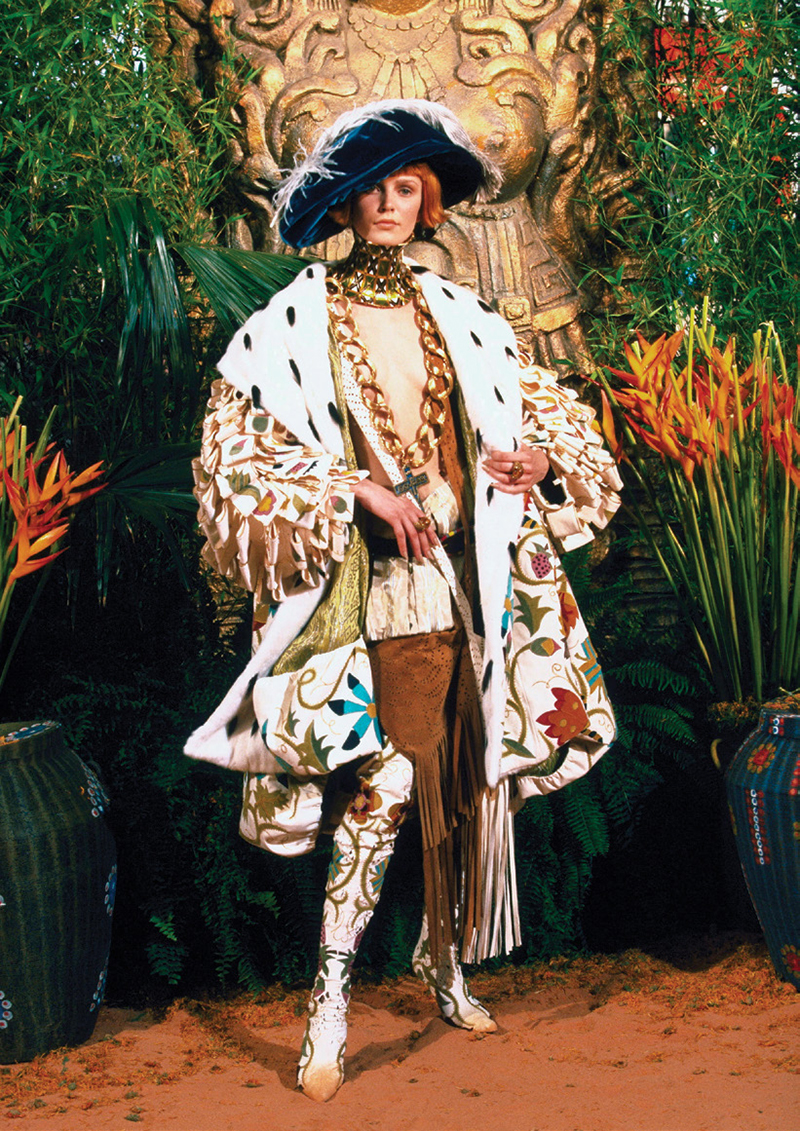 Of the various epithets that have been used to describe Donald Trump over the past two years, one of the most repeated is “vulgar.” The word has been used to describe many things about America’s next president— his penchant for gold plating, his behavior toward women, his defiant anti-intellectualism, his unusual word choices (“schlonged”?), his tendency to put his name on things in large typeface. David Remnick, in a post-election piece in the New Yorker, went so far as to describe Trump as “vulgarity unbounded.” Are we about to have a four-year crash course in this topic? Maybe it’s time to take a closer look.

The Vulgar: Fashion Redefined at the Barbican Art Gallery in London includes designs from the Renaissance to the present, such as this one from Walter Van Beirendonck’s Fall/Winter 2010–2011 collection, including a hat by Stephen Jones. © Ronald Stoops.

The word derives from the Latin vulgus, meaning “common people,” and while not necessarily a pejorative—it can be applied to vernacular language, for example—it almost always carries at least a soupçon of disdain. Shakespeare wrote of “the vulgar sort of market-men that come to gather money for their corn,” and had Polonius advise Laertes, “be thou familiar, but by no means vulgar.” Samuel Johnson defined vulgarity in his dictionary as “meanness, [the] state of the lowest people.” And Coco Chanel, with her typical hauteur, remarked that “some people think luxury is the opposite of poverty. It is not. It is the opposite of vulgarity.”

The interesting thing is that, despite its etymological roots, vulgarity is largely a concept applied to the rich and powerful. From Napoleon to Berlusconi, it has been used to link the very different ideas of tyranny and tastelessness. Describing a leader as vulgar is a way to call their authority into question, specifically by connecting them to the lower classes. Decorative arts are often dragged in as evidence. Following the overthrow of dictators, ornamental excess is often taken as proof of the regime’s evil: Imelda Marcos’s infamous shoe collection; Saddam Hussein’s Basra palace; the bizarre choreographed pageants of North Korea; or Muammar Qaddafi’s compound, a “vulgar Xanadu,” according to Christopher Hitchens.¹

One could certainly argue that there is a correlation between power-madness and overspending on the furniture —particularly when the people are starving.

Yet vulgarity is a problematic term in political discourse because it implies that the real problem with tyrants is that they lack discernment, not humanity. Nor are dictators the only ones who get tarred with the brush. “Vulgar” is also routinely applied to many other people who, in a more nakedly condescending time, might have been called “uppity.” The nouveau riche of China, who now account for about 20 percent of the customers and 35 percent of the sales for the global luxury sector.² Russian oligarchs who have caused alarm by buying up London and New York real estate. And hip-hop stars, with their sartorial preference for “bling.”

This last example is particularly interesting, for it shows how the stereotypes of class can be turned against themselves. As historian Carol Tulloch has written, while African-inspired dress has “kept a stable meaning of black resistance,” hip-hop style has always been in dialogue with “mainstream culture and corporate mass production.”³ When black subculture appropriates branded sportswear and diamond earrings, it lays subversive claim to the standard emblems of wealth. This is not just a matter of taste, but of tactics.

A design from the Autumn/Winter 1998–1999 collection by John Galliano for Christian Dior. © Guy Marineau.

Let me pause here to observe that it is not the job of this column, or of The Magazine ANTIQUES, to advance partisan views. Some readers may even feel that no discussion of politics whatsoever should appear in these pages, which, after all, are devoted to art and antiques, not ideology. The problem with this perspective is that objects don’t just sit there minding their business, waiting for us to work out our differences. They are the material embodiments of culture, and of ideas. And certainly, if there is one thing we can see clearly articulated in the history of art, both fine and decorative, it is class distinction.

This is the animating principle behind The Vulgar: Fashion Redefined, currently on view at the Barbican, in London. Curated by the pioneering fashion specialist Judith Clark and her partner, psychoanalyst Adam Phillips, the show works as spectacle because it is filled to the brim with outrageous designs. Alongside the expected enfants terribles of contemporary fashion, like John Galliano and Karl Lagerfeld, are examples of richly embellished dress from the eighteenth and nineteenth centuries. The works are emphatically elitist, but remain amazing as achievements of craftsmanship. The most challenging contemporary inclusions, by designers like Walter Van Beirendonck, Mary Katrantzou, and Gareth Pugh, show how couture mines working-class subcultures like hip-hop and punk for ideas. Fashion is often a quick shortcut from the unfairly marginalized to the highly capitalized.

Through its exploration of such movement, the exhibition asks us to consider how lines of taste are policed. Noting that vulgarity “is always a word used with great certainty,” Clark and Phillips ask us to stop and think about such judgments, beginning with the notion that museum exhibitions about fashion are themselves suspect: “Groups define themselves by the pleasures they privilege and the pleasures that they are contemptuous of. Classes are defined by the pleasures available to them and that they prize.” 4

It is no coincidence that this important exhibition is happening in Great Britain, a nation with acute sensitivity to class issues—which were front and center in last year’s controversial referendum over Brexit. Indeed, Clark and Phillips are following in a great British tradition of thinking about the subject, from the artist Grayson Perry’s 2012 television show All in the Best Possible Taste all the way back to Oscar Wilde, who mocked presumptions of taste even as he pretended to uphold them. “Arguments are extremely vulgar,” Wilde once said, “for everyone in good society holds exactly the same opinion.”

An eighteenth-century mantua, or robe, worn over a coordinating petticoat, a style popular in the Georgian courts in the 1750s and 1760s. Fashion Museum, Bath, England.

As America faces its own cultural divides, arguably deeper than any seen in this country since the 1960s, it seems a good time to import this critical tradition. Everyone, across the political spectrum, should be able to agree that it serves no one’s interest to see Donald Trump (or his supporters) as vulgar. On the one hand, it exacerbates exactly the class resentments that helped propel him to power in the first place. On the other, it aims at the wrong target, emphasizing style over substance. Anyway, calling someone vulgar—whether it’s Trump or the Notorious B.I.G.—is quite literally a cheap shot. It implies illegitimacy on the basis of superficial trappings, not ideas and policies. America is facing some serious issues over the next four years, but bad taste isn’t one of them.