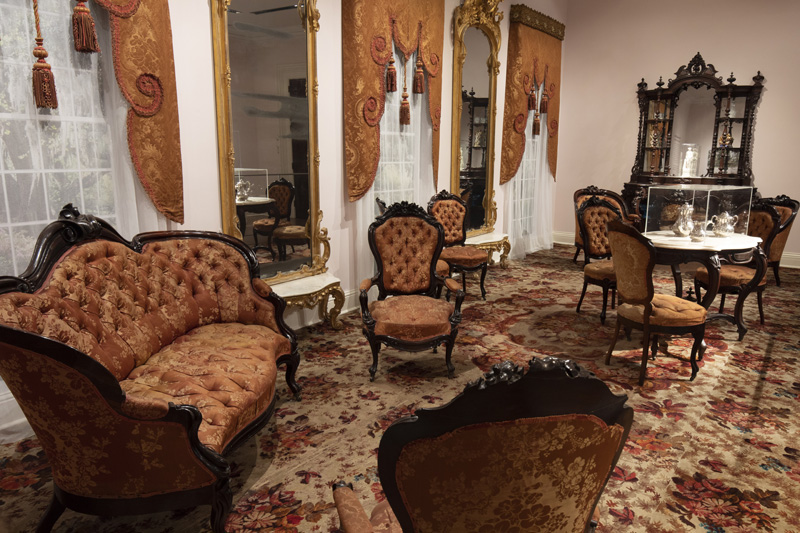 The New Orleans Museum of Art recently opened an installation of one of the South’s best-preserved pre–Civil War interiors. What could upstage a ten-piece suite of rococo revival furniture, an étagère loaded with antebellum decorative wares, towering lambrequin curtains, a pair of pier mirrors, and a flower-patterned carpet?

A palmful of hand-forged iron nails.

Those nails, likely made by enslaved laborers, were discovered in 2014 as a museum crew detached a carpet laid down in 1852 and removed other period furnishings from the parlor of Greenwood Plantation in St. Francisville, Louisiana, shortly after NOMA acquired the decorative ensemble put together by the planation’s doyenne, Harriet Flower Mathews (1794–1873), in the 1850s and ’60s.

Now the nails sit under glass, showcased amid a newly unveiled decorative arts installation that focuses on the parlor. NOMA curator Mel Buchanan felt the power of those nails when she showed the Greenwood furnishings in a 2015 temporary exhibition at the museum. “The nails were included in the show in a subtle way, but visitors saw them and grasped the bigger, untold story behind the parlor,” Buchanan says. “The nails were a tangible reminder of the labor that sustained the plantation. It was an emotional thing for many visitors, and it made me realize that these humble objects needed a place of honor in our gallery. I can’t look at the parlor now, without thinking of the nails.”

NOMA’s new display also offers a feast for those with an interest in period styles. The Mathews family and their descendants kept the plantation’s parlor intact for generations. “For NOMA this was a chance to conserve a rare piece of Gulf South history—a beautiful ensemble, ready for interpretation, with all of its original textiles,” Buchanan says.

The NOMA installation echoes the in situ experience without pretending to reproduce the original plantation rooms. A lofty gallery in the museum’s 1911 building gives the parlor furnishings room to breathe, and easily accommodates interpretive material and related objects.

To prepare the installation, Buchanan sifted through the Mathews family papers at Louisiana State University, reading documents such as bills of sale, census records, invoices from a spring shopping trip to Royal Street in New Orleans, and a clothing order for the ninety-six enslaved people who worked Greenwood Plantation. Among the most striking papers: the correspondence between the Mathews family and a Connecticut retailer. The northern firm had shipped the parlor’s suite of ornately carved rosewood furniture just before the Civil War, and continued to seek payment. An 1861 letter mentions the nation’s “troublesome times.” In 1867 the firm was still sending bills—with interest—but no record shows if the Mathews family ever paid its debt.