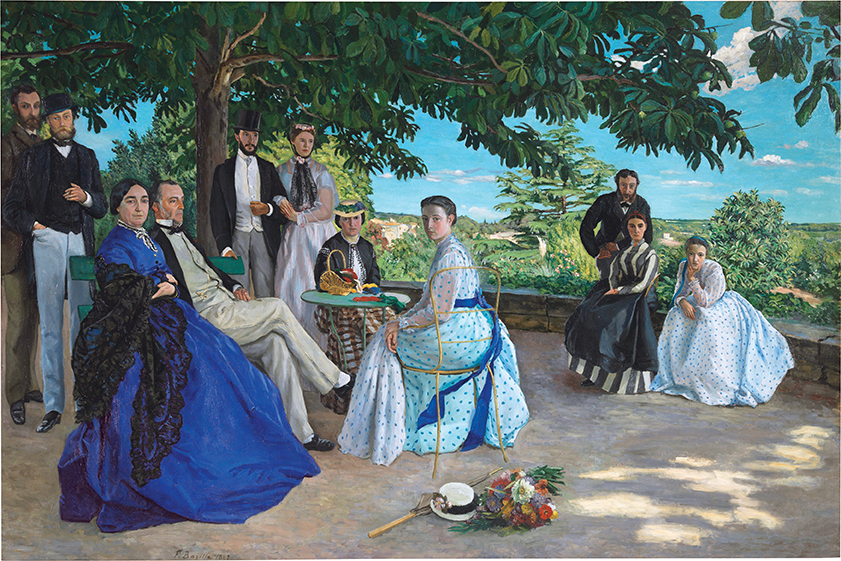 Most of the time art history marches steadily along, reliably yielding its generational crop of genius and mediocrity. But just as some ages are strangely bereft of excellence, others bring forth a concentrated burst of brilliance that defies all power of elucidation.

Such, surely, was the case with Paris in the 1860s. Consider Henri Fantin-Latour’s great group portrait A Studio in Les Batignolles (Fig. 2), a work that, on its own, would distinguish any age that could produce it. Against a somber background, six men, dressed in black, stand over two others seated and similarly attired, one of whom, Édouard Manet, paints the other, the critic Zacharie Astruc. Among the standing figures, one picks out Émile Zola, PierreAuguste Renoir, and at the far right, Claude Monet—all of them still in their twenties and all still largely unknown.

But towering above them is a distinguished-looking man, as young as they are but far less likely to be recognized today. This is the painter Frédéric Bazille, an artist as gifted perhaps as anyone in that room in Batignolles, and now the subject of a major retrospective at the National Gallery of Art in Washington, D. C., Frédéric Bazille and the Birth of Impressionism. The reason for which he is less well known is perfectly clear: several months after the painting was made, Bazille died on the field of Beaune-la-Rolande, in one of the final battles of the Franco-Prussian War. He had been under no compulsion to enlist, and Renoir and Monet tried desperately to talk him out of it. But like many young men at the time, he anticipated a brief and diverting promenade militaire. As he told his commanding officer: “I’m quite sure I won’t be killed. I have too many things to do in my life.” The very next day, November 28, 1870, Bazille was shot dead by a Prussian sniper, one week shy of his twenty-ninth birthday.

It was not supposed to be this way. In the history of art, it is difficult to think of any other painter who promised so much and delivered so little. That is hardly to say that Bazille did not achieve greatness. Rather, it is to insist that the very excellence of what he produced makes us long for what he might yet have done. Masaccio (1401–1428) died even younger, but he accomplished so much in a career that spanned scarcely four years that the magnitude of his achievement precludes our asking anything more from him. As for such equally short-lived painters as Egon Schiele and Keith Haring, their careers seem so complete and their styles so self-consistent that it is hard to imagine that, had they lived, they would have grown beyond the work we have.

But Bazille is different. The trajectory of his career hews very closely to that of Renoir and Monet, his constant companions, who were only a little older than he was. He was born on December 6, 1841, in Montpellier into an affluent provincial family of merchants and goldsmiths. Although he always harbored artistic ambitions, he initially went to Paris to study medicine, which he only gradually abandoned in favor of art. Renoir and Monet, of course, went on to become not only the pillars of the impressionist movement, but also the inventors, each in his own way, of an idiosyncratic style and way of looking at the world. If Bazille had lived as long as they or Degas, he would have died sometime around 1920, and there is every reason to believe that he, too, would have developed a signature style as instantly recognizable as theirs. What that style might have been is exactly as inconceivable as the signature styles of those better-known painters on the basis of what they had produced before 1870. All of them were realists at the time and all of them created masterpieces in the context of that realism, before they evolved, sometime in the early 1870s, into what we recognize today as impressionism.

The Washington, D. C. show, which began at the Musée Fabre in Montpellier, includes works by Courbet, Manet, Monet, and Renoir, as well as a generous sampling of Bazille’s sixty or so surviving paintings and his preparatory drawings. Despite its title, the show is less about impressionism than about realism. Of the many styles that grace the history of

Western art, realism, unlike the impressionist movement that grew out of it, is not conspicuous for its charm. It seems, almost through some morbid instinct, to seek out the leaden heaviness in things. Darkness and unalloyed blacks—which are largely banished from the palette of impressionism—dominate its masterpieces, even in images of sunlit fields and bouquets of spring flowers. A telling example is Bazille’s Flowers (Fig. 3), a depiction of narcissi and tulips in a crystal vase that stands at the edge of a table and rises up against a dull, dark background. We encounter this heaviness again, literally embodied in the early Self-Portrait in which the pale Bazille, wearing a black vest and blinding white shirt, and holding a palette, emerges from a similarly dull gray background (Fig. 5).

And yet realism in general, and Bazille’s paintings in particular, possess the leaven of one supreme charm, a sense of radical newness, of suddenly awakening to a world freed from the mythological mediation of all previous art. Many earlier generations of painters had directly observed the world in drawings, only to return to their studios to paint what they had just seen. But the realists, and even more so the impressionists, took their easels and their paint boxes out into the fields and painted directly from nature. It is this that imparts to their canvases a new sense of immediacy, and also accounts for the sunlight that floods so many paintings of the period, not least Bazille’s The Western Ramparts at Aigues-Mortes (Fig. 4). Here, as in all such realist works, the noonday sun feels invasive, even polemical, as it falls across the fortifications and the fields, the sailboats and turquoise waters of the lagoon.

One of the most dramatic uses of sunshine in the works of Bazille is in Summer Scene (Fig. 6), which the artist was delighted to be able to include in the Salon of 1870. What is so striking about this work, beyond its extravagant ambition or how the eight male figures, in varying degrees of undress, stand around a swimming hole, is how contemporary it feels. It is surely not contemporary in the sense of contemporary art—although it may remind some viewers of Neo Rauch—but contemporary in the blazing clarity with which it depicts a summer afternoon, and in a quality of the light that will feel instantly familiar but that, oddly, had never before been proclaimed so forcefully in a painting.

In truth, Summer Scene is more imposing for its ambitions than for its results. The figures are awkwardly drawn and the perspective feels forced and imperfect. The same cannot be said for The Family Gathering (Fig. 1), which is surely Bazille’s masterpiece. In it we see eleven figures, including the artist himself, almost hiding on the far left of the canvas. There had never been a family portrait or any group portrait quite like this. The sitters gaze in silence at the painter as they would gaze into the lens of a camera. In that gaze is a look of nervous stillness and focused intensity that is common enough in nineteenth-century photography, but ultimately new to the diapason of human expression.

If the chromatic center of the painting is the artist’s regal mother in her blue dress, its compositional center is the artist’s cousin Thérèse in a white dress with a bluish-purple sash. The stately progression—from the mother to Thérèse and from Thérèse to that fabulous triad of souls in the background on the right—has all the self-evident authority of classical art, even though it is utterly without precedent in any earlier painting. The only important parallels, perhaps, are Fantin-Latour’s A Studio in Les Batignolles and Degas’s portrait The Bellelli Family (1858–1867), both of them nearly contemporaneous with this work.

What Bazille accomplishes in this painting is the rediscovery and reapplication of those principles of composition that the Old Masters understood and that most of the painters of the nineteenth century had forgotten. It is true that there is a certain dryness to Bazille’s paint textures, relative to the Old Masters. That tactile richness as well would be reclaimed for modern art with the development of impressionism in the next decade. And there is abundant reason to believe that Bazille would have played an active role in that rediscovery, had he not died so young.

Frédéric Bazille and the Birth of Impressionism is on view at the National Gallery of Art in Washington, D. C., through July 9, 2017.