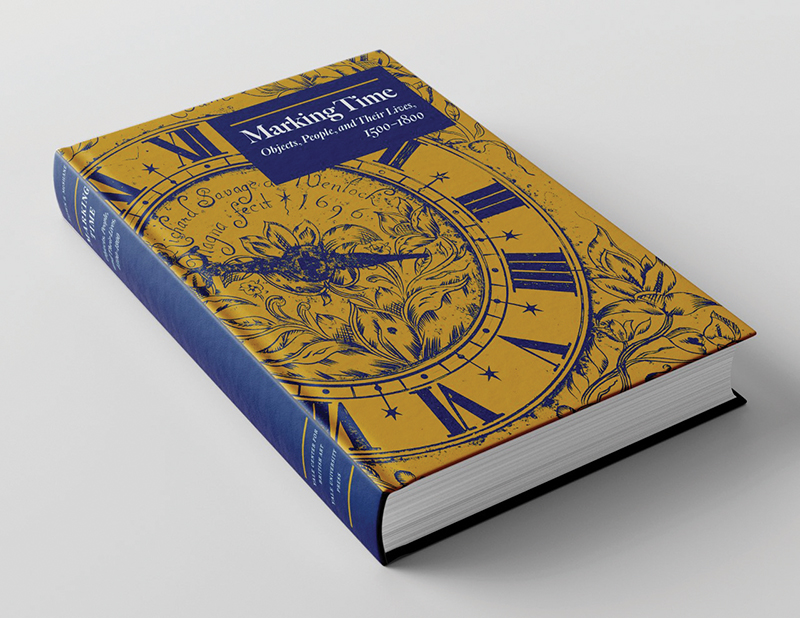 Marking Time: Objects, People, and Their Lives, 1500–1800 is an ambitious exploration of a subject that has rarely—perhaps never—been addressed by design historians: how was time experienced by Britons in the early modern period? In an entirely original and satisfying way, the authors seek the answer in a collection of nearly five hundred objects, most of which are relatively unassuming quotidian pieces. A brass alms dish, a bone and boxwood apple corer, a tortoiseshell comb, and a silver inlay-decorated cutlery set are representative of the broad range of useful goods included. All bear a date and many are further decorated with initials, inscriptions, and occasionally a place name. They were not chosen as exemplars of elite taste, innovative style, or luxurious materials, and many are works that might traditionally have been considered curiosities. Scholars and collectors more recently have brought such pieces into discussions of social and economic history, but they certainly have never been considered in as broad a context as time and its meaning. The book invites historians of decorative arts into a new arena that lies beyond the purely aesthetic, technological, or genealogical, though it does not discount any of those. It demonstrates how we might ask big questions of small things, allowing them to lead us into the lived experience of their owners and their makers.

It’s not a surprise that there is a backstory to such an original undertaking. The prime mover was the late John H. Bryan II, and nearly all of the works published here are part of the vast collection he assembled over the course of more than thirty years at his Lake Bluff, Illinois, farm. Bryan delighted in sharing his many interests with a wide-ranging cast of scholars, dealers, artists, and architects. He set out initially to acquire outstanding examples from across all categories of objects, but when a curator visiting the farm made the neutral observation that many of the pieces were inscribed with dates, Bryan became characteristically curious. Why and for whose benefit were these pieces dated? What events were worthy of commemoration? The inquiry expanded, and, working with scholars Angela McShane and Jenny Saunt, Bryan began to focus on acquiring dated objects. The present volume, edited by Ed Town and McShane, has emerged eight years after that initial conversation, and was intended to accompany an exhibition at the Yale Center for British Art. Though that installation had to be cancelled due to the coronavirus pandemic, it is books, after all, that can make a more lasting impact on the way we think about objects. This one will do exactly that.

At the core of the project are 460 dated objects spanning the years 1549 to 1804. Nearly all are drawn from Bryan’s diverse collection. They are mainly modest, functional pieces from upper-middle, middle, or working-class homes and workplaces, both rural and urban. They are individually catalogued with essential apparatus relating to materials and provenance and the brief entries are often devoted to the function of an entirely unfamiliar form. A porter’s tally of 1765, one learns, is a badge worn by a member of the Fellowship Porters, who unloaded and transported goods such as coal, fish, and corn. The crimped leather panel was worn on the waist, and wooden pegs were slotted into the grooves to allow an accounting at the end of the work period of the loads carried. The engraved brass mount bears the name of its wearer, Samuel Harris, which allowed the team of researchers to establish his London parish and the date of his (clandestine) marriage. It is an odd and unfamiliar survival, and the simple explication of its function is full of information about valuing and compensating labor. A pair of covered glass goblets of 1709 is among the grander pieces included. Engraved with a coat of arms and clusters of grapes, the goblets were likely decorated to commemorate the twentieth anniversary of the marriage of Percival and Sarah Hart. To the authors’ credit, the individual entries are disciplined and spare, and they do not wander off their path of inquiry. The works are organized not by date or medium or style, but clustered into eight chapters that follow the span of life from “Childhood and Youth” to “Death and Legacy.”

These nearly random slivers of evidence are proven meaningful when the authors turn the telescope around, and, in seven essays, reveal their expansive ambitions. Town and McShane were joined by contributors Keith Wrightson, Glenn Adamson, Justin M. Brown, Gavi Levy Haskell, Edward S. Cooke, and Nathan Flis. They wrestle gracefully with a subject that is purely conceptual, exploring ways that the experience of time is embodied in the modest objects of everyday life. In his introduction, Wrightson establishes a narrative that traces an increasingly secular awareness of time over the course of three centuries. Traditionally, the year was tied to repeating cycles of planting and harvest, and, at least until the Reformation era, to the sacred calendar. With growing prosperity and global trade, the culture of record-keeping expanded accordingly. The development and distribution of precise timepieces caused the meaning of time to shift inexorably to a more structured day and year. Glenn Adamson acknowledges that the experience of time must have differed for the elite and the lower classes; parsing its meaning demands an awareness of time as a commodity. He raises the provocative question: could some of the dates on these objects have been intended to suggest their future obsolescence? Justin M. Brown makes an important calibration to the narrative with a foundational truth: for the enslaved workers of the colonies, who generated so much wealth for Britons in this period, time was ruthlessly stolen.

The book is a deft and engaging exemplar for future scholars. To be clear: this is not purely intellectual history; that is, the contributors did not come from disciplines with established literature on the experience of time, such as physics or philosophy, hoping to add a little visual spice to their narrative. The authors—art historians and social historians—stay close to their primary sources, establishing a useful precedent for a coming generation. In addition to the objects themselves, they have analyzed documentary evidence such as court depositions, household manuals, and wills. They constantly circle back to the central question: how does material culture embody the lived experience in this period? How and why did the experience of the hours, days, months, and years shift over the course of the period covered?

This is, for all its somber modesty, an audacious, resolutely anti-elitist book, and it is a suitable tribute to the influential collector and patron who sponsored it. As Jenny Saunt explains in an afterword, John Bryan understood that to look at art is to be in active communication with the artist and with the past. He knew that works of art respond to their setting, to adjacencies, to lighting, and to sightlines. He himself was as creative as the many makers whose works he collected, and, as Saunt says, to visit him at Crab Tree Farm was to be transported. His installations at the farm were not an ersatz re-creation of the past, but rather the invention of a fresh new moment. Although he died in late 2018, the collaboration with Yale was carried on by his son and the members of his team at Crab Tree Farm. Bryan’s interest in understanding and enhancing the lived experience is thoughtfully embodied in this book.

ELLENOR ALCORN is the Chair and Eloise W. Martin Curator of European Decorative Arts at the Art Institute of Chicago.