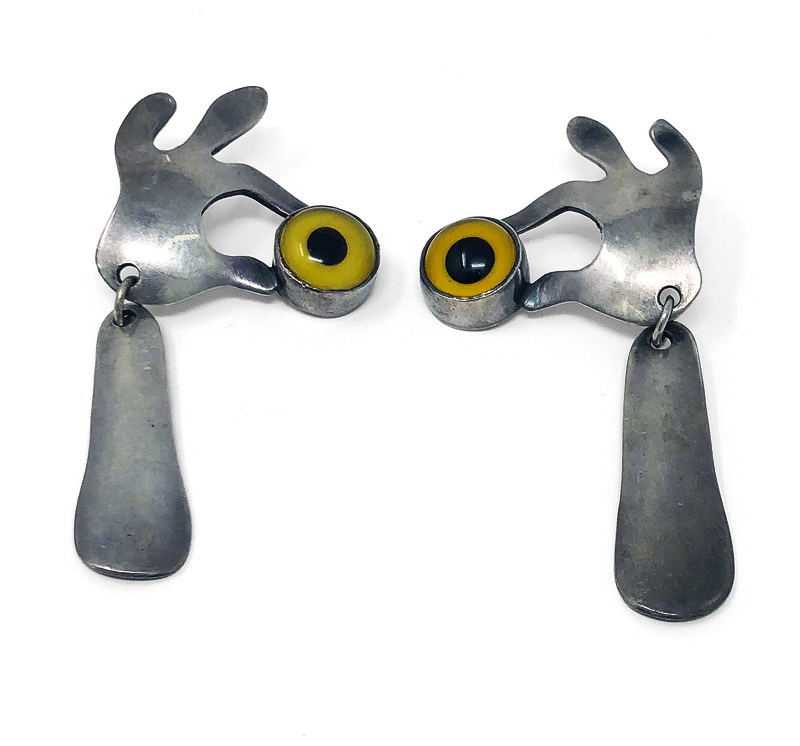 It was fitting that as I began to write this review of a new book about the New York jeweler Sam Kramer, Dizzy Gillespie’s 1940s bebop tune “Salt Peanuts” was playing on the radio. The nonsensical lyrics “salt peanuts” repeated in a jumpy jazz rhythm made a fine accompaniment to the gyrating jewelry pictured in the book before me.

This first retrospective assessment of the bohemian jeweler and self-promoter extraordinaire is late in coming. Kramer was one of the earliest modernist jewelers to work in Greenwich Village, the beating heart of the city’s jazz, literary, and arts scene in the mid-twentieth century, where many other jewelers like Art Smith, Paul Lobel, and Jules Brenner also got their start. Fortunately, his legacy is in good hands thanks to this volume by jewelry historian Toni Greenbaum, who utilized primary materials made available by the artist’s descendants.

An inveterate rock hound and avid seeker of the offbeat, Kramer amassed thousands of minerals, coins, and curios that he wove into his work. Some uncut stones were captured in cages of twisted wire, a simple, yet ingenious method that the artist published in the 1950s, and which was adopted by many others. Famously, he made special use of taxidermy eyes, alluding to surrealist works by Salvador Dalí and René Magritte.

Sam Kramer the self-promoter is well documented through his artful wreck of a studio, and such publicity-generating stunts as the ceremony he conducted in which plaster casts were removed from jazz guitarist Eddie Condon’s broken arm and writer Anatole Broyard’s broken leg.  His eye-catching advertisements featured such hyperbolic titles as “Wow! Eek! Gasp!” and text to lure the unconventional—and wishfully bohemian—with his tongue-in-cheek guarantee: “Under no circumstances will names of our customers be divulged to any investigating committee.” He cooked up attention-getting ideas to draw notice to his shop, hiring “Space Girls” to wear his jewelry as they drove scooters around town, and appearing in public with a fifteen-pound lobster in homage to Dalí and his famed lobster telephone sculpture.

The book is divided into three chapters, the first two of which follow Kramer in his early years through his move to Greenwich Village and the manufacture of his own wild and crazy reputation. The third, entitled “Fantastic Jewelry for People Who Are Slightly Mad,” assesses his career in light of four subjects, beginning with “the propaganda,” which describes the spectacle of his shop, starting with the bronze doorknob in the shape of a hand that greeted visitors (and which wore a pigskin glove during the winter); “the players,” the tight family of makers and designers around him, including his first wife, Carol Enners Kramer; “the product,” an analysis of his designs; and “the payoff,” an assessment of his reputation. The volume concludes with nearly seventy images of jewelry that amply display the imaginative range of the artist. A thoughtful foreword by jewelry designer and writer Benjamin Lignel analyzes Kramer’s propensity to cultivate his “hedonistic and irreverent persona” as a means of attracting like-minded consumers.

With a handsome design that combines bold graphics and typefaces and suits its audacious subject, vintage photos that bring Kramer and his world to life, and high quality jewelry images from Arnoldsche, the book is the perfect size to curl up with—and to conjure your own surrealistic dreams.