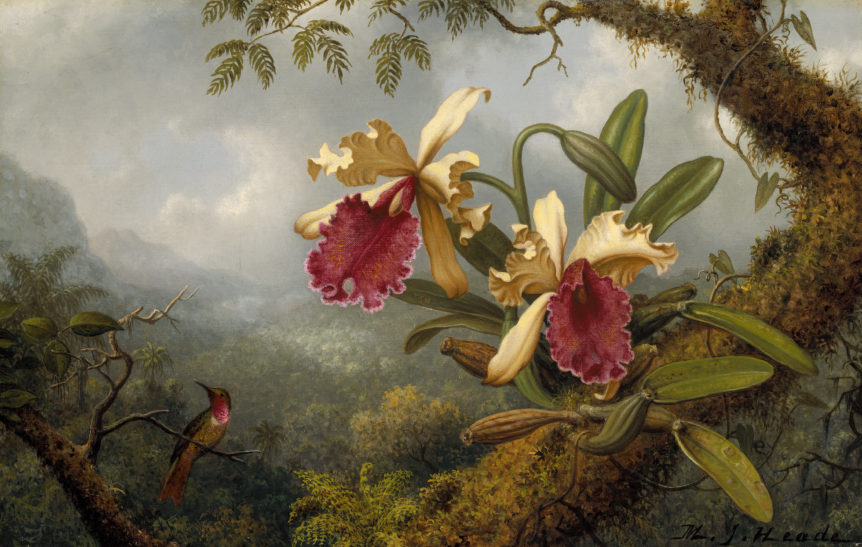 Orchids and Hummingbird by Martin Johnson Heade, c. 1875–1883. All works gift of Maxim Karolik for the M. and M. Karolik Collection of American Paintings, 1815–1865. Courtesy Museum of Fine Arts, Boston.

The itinerant artist is a staple figure in the cultural history of nineteenth-century America, but no one roamed more widely—in terms of both miles and artistic development—than the landscape and nature painter Martin Johnson Heade (1819–1904), who went from a farmland boyhood to become a favorite of princes and tycoons. Heade is appropriately the subject of a traveling exhibition organized by the Museum of Fine Arts, Boston, that is on view this summer at the Georgia Museum of Art.

Even Heade’s name—originally “Heed”—grew more sophisticated. (He changed it in 1846 to what he said was the ancestral spelling.) Heade was tutored in his rural Pennsylvania youth by Quaker minister-turned-artist Edward Hicks, of Peaceable Kingdom fame, and by his early twenties, was being exhibited in Philadelphia. Nominally settled in New York in 1843, Heade traveled almost continuously for the next sixteen years around the United States and Europe. As he refined his talents as a painter, he switched from portraiture to landscapes—scenes of the seashore and salt marshes became a specialty. In 1863 he visited Brazil and became captivated by the tropical flora and fauna. A series of small paintings of brilliantly colored hummingbirds helped win Heade a knighthood from Brazil’s emperor; his lush South American landscapes earned him fame at home.

Heade’s greatest talent lay in capturing atmosphere: you can almost feel the humidity in his paintings of the Brazilian jungle, and hear the rumble of thunder in his depiction of a coastline darkened by an approaching storm. It’s good that Heade’s art, like the artist himself, is getting around.