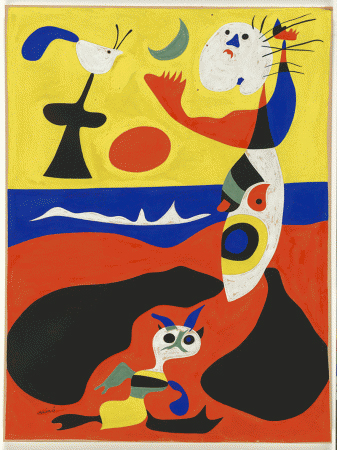 Chiura Obata: An American Modern at the Crocker Art Museum, to September 29

This exhibition features an expansive collection of paintings, drawings, and prints by the Japanese-born northern California artist, some never before displayed. Obata’s early work, his internment camp paintings, and best-known California landscapes are highlighted. crockerart.org

The Race to Promontory: The Transcontinental Railroad and the American West at the Crocker Art Museum, to September 29

Calling all railfans: the train is leaving the station. The 150th anniversary of the Transcontinental Railroad completion is examined through the work of photographers Andrew Russell and Alfred Hart, who followed the Union Pacific and Central Pacific Railroads respectively through their often-unforgiving construction efforts. crockerart.org

Still: Elemental at the Clyfford Still Museum, September 26 to January 12, 2020

The abstract expressionist Clyfford Still wanted his jagged, flame-like paintings and bleaker works inspired by the windswept plains to provoke a visceral reaction in viewers. This show examines Still’s art through the prism of  Greek philosophy, in galleries that connect his art thematically to the five Greek elements: earth, water, air, fire, and æther. clyffordstillmuseum.org

A Nation Reflected: Stories in American Glass at the Yale University Art Gallery, to September 29

Glass, whether decorative or utilitarian, is a material shared by everyone in the great American experiment. Through one hundred glass objects, the Yale University Art Gallery tells cultural, technological, and artistic tales from the eighteenth to the twentieth centuries. artgallery.yale.edu

Key works from the prolific fabric artist’s career are reconfigured in this installation. The highlight, Escalade Beyond Chromatic Lands (2016-2017), sets the tone for more intimate art by Hicks, whose work offers at once a celebration of nature and materiality and a social critique. thebass.org

Rubens, Rembrandt, and Drawing in the Golden Age at the Art Institute of Chicago, to September 28 to January 5

The Netherlands experienced great upheaval in the seventeenth century; politics, religion, and science locked in battle. Yet this intense milieu produced some of the greatest art in the Western canon, and the twin titans of the day and place were Rubens and Rembrandt. The exhibit highlights their life drawings, including works in chalk, ink, and watercolor, as a means of understanding the interlocking social changes of the period. artic.edu

Dior to Disco: Fashion in the Era of Second Wave Feminism at the Goldstein Museum of Design, University of Minnesota, to September 29

Dior’s “New Look” designs are exhibited in conversation with other designs from 1947 to 1975. Feminist (or not) the designs of the era are diverse and tell the stories of women across class and race. goldstein.design.umn.edu

A celebration of a great artist and environmentalist, the show is billed as the New York Botanical Garden’s largest botanical exhibition ever. Along with living examples of Burle Marx’s landscape designs, the show includes paintings and tapestries, highlighting the connections between his artistic practice and his arboreal visions. nybg.org

In a New Light: Alice Schille and the American Watercolor Movement at the Columbus Museum of Art, to September 29

An Ohio native who began her artistic studies under William Merritt Chase in the 1890s, Schille grew to become an acclaimed master watercolorist. In this exhibit, more than 50 works have been selected to showcase Schille’s unique perspective: at once a marriage of her interest in women’s suffrage, and a love for the American landscape. columbusmuseum.org

A Venturesome Spirit: Louis Magaziner in 20th Century Architecture at the Athenaeum of Philadelphia, September 25 to December 20

The buildings of Louis Magaziner embodied the evolution of architecture in the twentieth century, from the arts and  crafts style to sleek modernism. His work, as well as some work by his contemporary and friend Julian F. Abele, is examined as it relates to the city of Philadelphia. philaathenaeum.org

Fantasy and Reality: The World According to Felix Buhot at the Palmer Museum of Art, Pennsylvania State University, September 29 to December 15

Buhot was a uniquely imaginative printmaker from France. In the final quarter of the nineteenth century, Buhot produced cheerful and somber scenes alike, and he was especially adept at scenes of city life on rainy and foggy days. palmermuseum.psu.edu

This exhibition looks at the monstrous and grotesque as metaphor in the surrealist art of the 1930s and ‘40s, as Salvador Dalí, Luis Buñuel, Max Ernst, Dorothea Tanning, and others responded to the rise of fascism, the Spanish Civil War, and World War II. fristartmuseum.org

End of Day: American Oil Painting Around 1900 at the Frye Art Museum, to September 29

Drawn from the Frye’s permanent collection, the artworks in this exhibition trace the variety of ways that  American artists depicted the dramatic changes in the nation in fifty-year period between the Civil War and World War I. fryemuseum.org

Alberto Giacometti: A Line Through Time at the Vancouver Art Gallery, to September 29

This exhibition offers an opportunity to see the art of Alberto Giacometti beyond his bleak iconic sculptures of attenuated figures. Paintings, drawing, and examples of his designs are on view, alongside work by friends and contemporaries such as Jean Dubuffet, Man Ray, and Francis Bacon. vanartgallery.bc.ca

Like his mirror paintings, Roy Lichtenstein’s Entablatures series of prints from the 1970s is a body of his work known chiefly to connoisseurs. Inspired by the classical architectural motifs he saw in Lower Manhattan, the prints represent—like his comic book paintings—another example of Lichtenstein’s meditations on pattern and repetition. whitney.org

This indoor and outdoor market in the West Loop makes a fun day of shopping for antique and vintage items of all kinds, while enjoying live bands and food from local vendors. randolphstreetmarket.com

The Original Round Top Antiques Fair, September 30 to October 5

A Texas classic, the Round Top antiques fair celebrates its 51st year with this fall’s edition. The Big Red Barn section of the fair is famed as a source for Americana, while the Continental Tent features a fantastic mix of French, Italian, and English antiques. roundtoptexasantiques.com