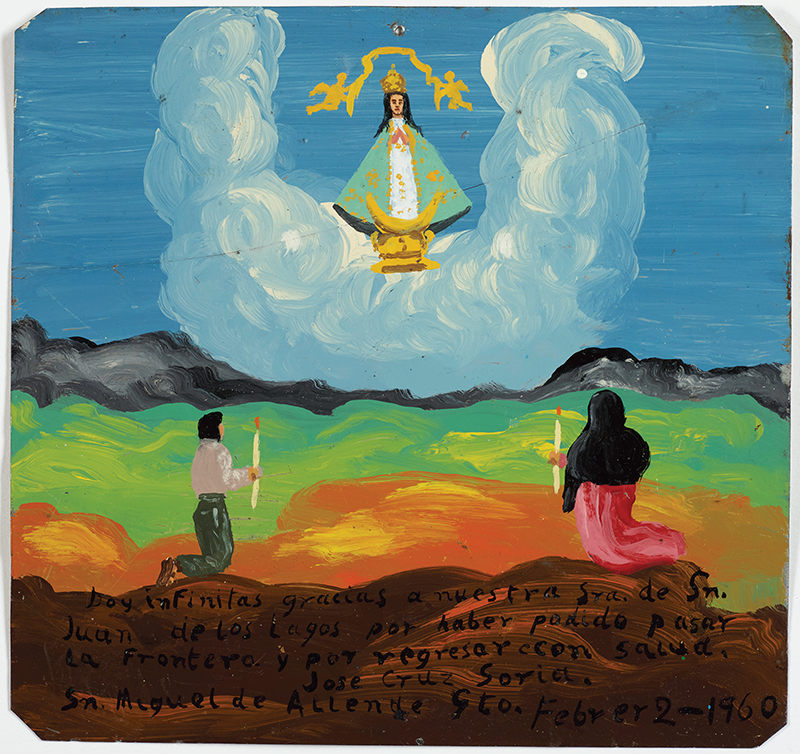 Like the literature of magical realism, the lovely painted metal Mexican retablos currently on view at the Princeton University Art Museum cast memory, bonds of affection, calamity, and averted disaster in the intersecting space between modern times and the immutable past. Retablos, meaning “behind the altar,” have grown out of a centuries-old tradition of devotional art celebrating the gentle protection of the Virgin Mary and her divine interventions. The fifty small paintings in the show, executed on inexpensive sheets or pieces of metal, recall miracles of healing and recovery against all odds, or tell hair-raising stories of survival. One meticulously detailed retablo from 1954, for example, depicts the collision of a tractor trailer with an automobile on a country road. The inscription by the anonymous votary who painted it notes that four persons were left dead and four were injured by the accident, and he gives thanks for being alive.

Most of the retablos on view at Princeton are dedicated to the Virgin of San Juan de los Lagos, who is particularly cherished by the migrant farmers of central Mexico.

Although the paintings are designed for a sacred purpose and intended to be displayed at a holy shrine, they’re filled with intimacy and innovative details: the swag of a curtain, for instance, framing the moment of wondrous recovery in a lonely sickroom. One of the most beautiful paintings shows two kneeling figures holding votive candles and looking across the ripples of the Rio Grande. Above them, the Virgin rests on an ethereal nimbus. The inscription reads in Spanish “I give infinite thanks to Our Lady of San Juan de los Lagos for having enabled me to cross the border and return with health. José Cruz Soria. San Miguel de Allende, Guanajuato. February 2, 1960.” Hardly larger than the width of a hand, it stands as a sacral emblem, a document of a Mexican odyssey, and a reminder of the healing powers of art.

Miracles on the Border: Retablos of Mexican Migrants to the United States • Princeton University Art Museum • to July 7 • artmuseum.princeton.edu