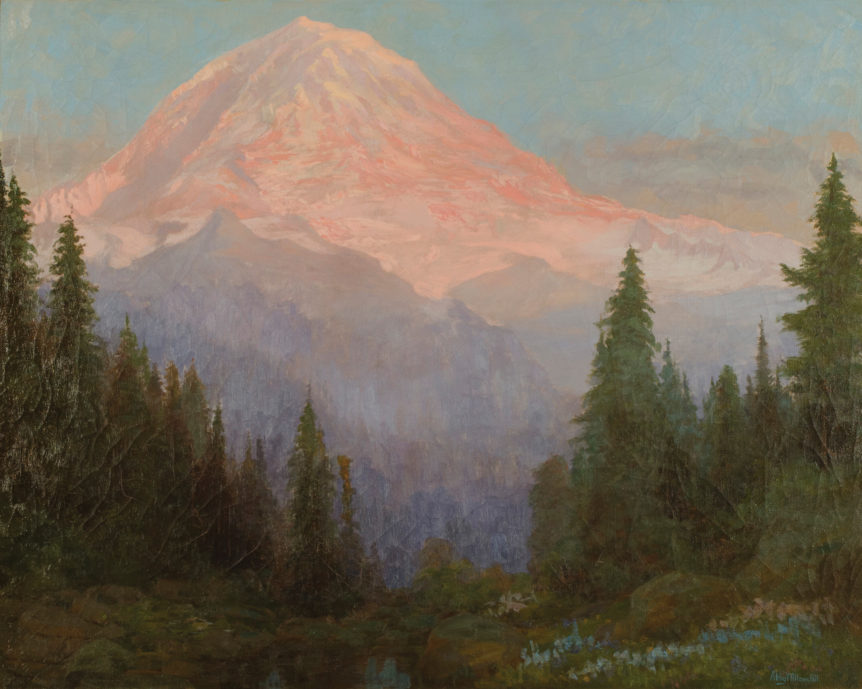 Rain, snow, high winds, and vertiginous mountain peaks—these were not a problem for the prolific landscape artist Abby Williams Hill (1861–1943), one of the most intrepid plein-air painters America has ever produced. She also became one of the great mythologizers of the Pacific Northwest when, from 1903 to 1906, the Great Northern and Northern Pacific railroad companies used her jewel-toned mountainscapes in their advertising campaigns.

Promoting the West: Abby Williams Hill and the Railroads, on view at the Tacoma Art Museum through October 15, includes her paintings, sketches, notebooks, and reproductions of her archival photographs. The Iowa native studied with William Merritt Chase at the Art Students League of New York before moving to Tacoma with her physician husband. In a day when women were expected to be demure and house-bound, Hill was the first woman artist hired by the railroads, and she took the opportunity to spend long stretches of time camping in the wilderness, almost always with her four children in tow. “I was cut out for the wilds,” Hill liked to say, and arranged to be paid in railroad tickets so the family could travel.

“Hill believed in painting directly in front of her subject, so she braved all kinds of weather and settings to get her pictures,” says Margaret Bullock, curator of collections and special exhibitions. “She talks often in her journals about having to deal with bugs, dirt, and such getting onto her wet paintings. And at one point, a canvas blew away and almost took her with it over the edge of a canyon.” Hill was also a dedicated social activist, founding the Washington state chapter of the Congress of Mothers, today’s PTA. She supported African-American and Native American rights, early childhood education, and advocated for immigrant and disadvantaged families. Her extensive letter-writing campaigns helped put a halt to road building and other commercial development in U.S. national parks. As Bullock says: “Not much stopped her.”