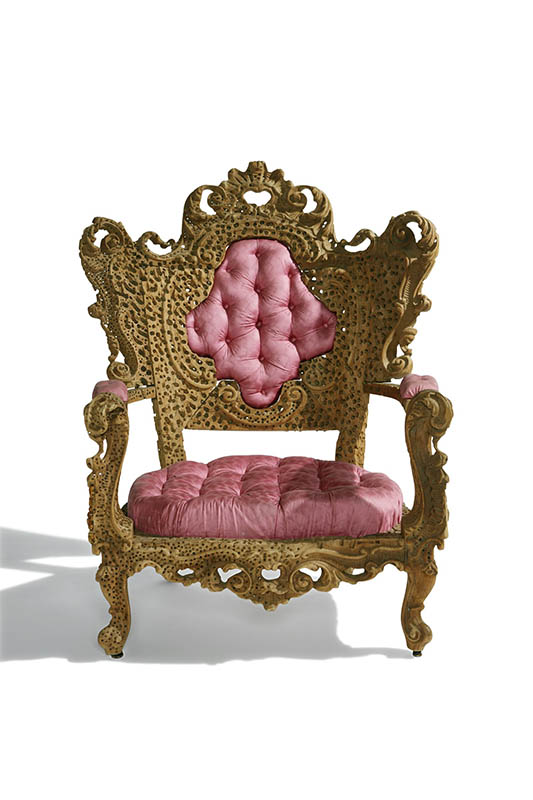 Although the Coronavirus pandemic has shuttered the museum temporarily, the show is still currently scheduled to travel to Yale University’s School of Architecture in fall 2021. The lushly illustrated catalog (Yale, $45) promises to become a standard reference on the movement, offering a mix of contextualizing essays, interviews with participants, thumbnail biographies and a useful index. There’s also a silver lining for Houston: Most objects in this show belong to the city’s flagship museum, thanks to the gift and partial purchase of key works from Dennis Freedman, a New York City collector who searched out pieces for decades while working in fashion and as a creative director at Condé Nast.

“Dennis did the research, saw the connections, and built a comprehensive collection,” said MFAH curator Cindi Strauss. “With this acquisition we have become the leading North American repository for Italian Radical design, second only to the Centre Pompidou in Paris.”

Although Freedman bought his first piece in 1998 at Christie’s South Kensington, he had been fascinated with the Radicals since his student days at Parsons School of Design. “I stumbled on the catalog for Italy: The New Domestic Landscape — a landmark, 1972 exhibit at the Museum of Modern Art — and that book became a talisman,” Freedman said. “I carried it through all my moves, pondered its illustrations, and thought about the ideas of the Radical designers and how they fit in with my own sense of history, my coming of age amid moon landings, marijuana, the Vietnam War, and the liberating spirit of the era. When I finally began to collect, the process felt autobiographical.”

The trove assembled by Freedman includes many one-of-a-kind prototypes, scale models, and objects that were only produced in limited editions. That’s partly because these Italian designers were often more interested in ideas and visual provocation, than in producing objects for mass consumption. Thus Freedman  sought works by designers such as Urano Palma, whose “Armchair,” a 1970s parody of baroque ornament, was fabricated — very slowly — with the aid of woodworms, which bored into the frame to produce its pitted and pierced surface.

To thumb one’s nose at Italy’s past was always part of the aesthetic for the Radical designers. Freedman’s first purchase, for example, was a massive Capitello lounge chair from the Studio65 design collective. Made from polyurethane foam, it resembles a broken ionic capital from a classical ruin, but cushy enough to function as seating.

Italy’s radicals also pushed against the cool modernism of post-war industrial design — Olivetti typewriters, Arflex chairs, and other commercial triumphs. Instead, they  tapped into the cheeky absurdity of American Pop Art and the philosophical concerns of Arte Povera. For them, furnishings were “no longer merely a backdrop, but rather a stage for the expression of desires,” wrote critic Germano Celant, who saw the movement unfold and contributed an essay to the MFAH catalog.

Celant’s language echoes that of the Surrealists, who also enthroned desire as a revolutionary force, a liberating alternative to a predatory capitalist society. The connection between Surrealism and the Italian designers was often direct. In 1971, for example, Italian entrepreneur Dino Gavina commissioned Man Ray to design a functional stool for his Ultramobile Collection. The artist responded with Le Témoin (The Witness), a stylized eye, rendered in wood, enamel and plastic, which commands its surroundings with an unblinking gaze.

One of Houston’s most remarkable piece, Cielo, Mare, Terra Buffet by Fabio De Sanctis and Ugo Sterpini, drew praise from the Surrealist mage Andre Breton when it appeared in a 1965 exhibition of Surrealist art in Paris. Breton wrote, “I consider this walnut buffet with interior shelving and Fiat car doors … to be one of the marvels of the modern world.”

Faced with a society in turmoil, where all values were being reduced to cash values, the Italian Radicals offered a shared utopian vision, but couched it in a dizzying variety of styles and forms. To get a sense of that variety, consider two lamps from the Houston show, one by the Austrian-born Ettore Sottsass, the other by Florentine architect Lapo Binazzi.

For his MGM Table Lamp, Binazzi borrowed the logo of the Hollywood film studio, translating its coiling ribbons of film into aluminum and replacing its centerpiece lion with a hemispherical lampshade and conical base. By appropriating an emblem of the entertainment industry, Binazzi sought to extend the critique of consumer culture that was central to the thinking of Radical designers.

Sottsass took a different tack with his Capodanno Table Lamp, designed for Studio Alchimia in 1979. This elegant piece evokes the geometric volumes and neoclassical proportions of Biedermeier objects, but it’s hardly a revivalist piece with its edgy mix neon tubing, colored bulbs and faux granite laminate.

Sottsass touched on the inner meaning of such objects in a 1993 biography written by Barbara Radice: “Whatever we do or design has iconographic references, it comes from somewhere,” he said. “To put an object on a base means to monumentalize it, to make everyone aware it exists.” With the Radical exhibition, Freedman and the MFAH provide a similar service for a whole generation of Italian designers and architects.