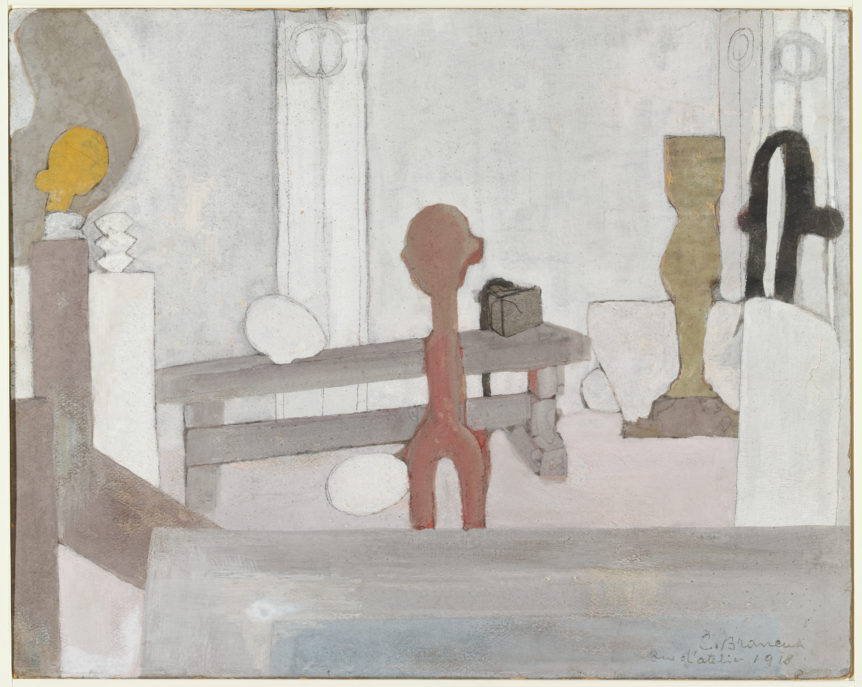 A scant two and a half years ago, the Museum of Modern Art mounted one of the great loan exhibitions of the age, Picasso Sculpture. As its two hundred objects laid siege to the museum’s third floor, it felt like the definitive statement on this essential part of the Spaniard’s creativity. Now the same museum has mounted an exhibition, Constantin Brancusi Sculpture, in honor of the great Romanian modernist. This time, however, there is no pretense of completeness. With sculptures culled entirely from the museum’s own collections, it is a modest show with only eleven of Brancusi’s sculptures—but well-chosen and hitting most periods of his long career—as well as photographs, drawings, and archival material touching on his relations with MoMA itself, among other things. Although there is no particular reason for mounting this show at this time, since it coincides with no anniversary or milestone, the opportunity to view this sculptor’s works is always welcome. 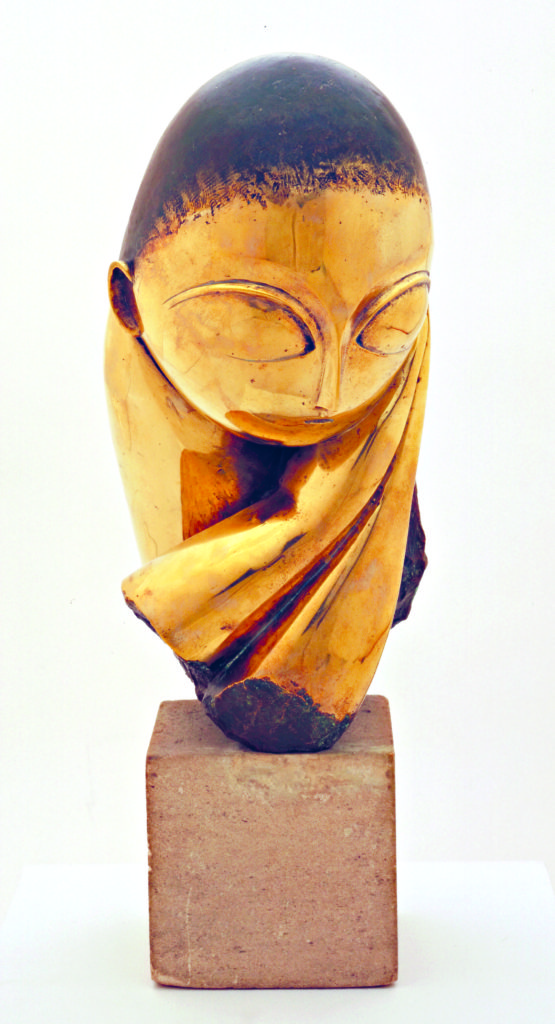 A comparison and contrast between Brancusi and Picasso can only be instructive: they were very much contemporaries, respectively born in 1876 and 1881 and deceased in 1957 and 1973 and, in their very different ways, they revolutionized the art of sculpture. But it would be difficult to imagine two men more different in character. Hard as it is to believe, there was a time, around his twentieth year, when Picasso put on airs and tried to dress like an Englishman, before he resigned himself to being that bandy-legged, bug-eyed monstre sacré that the world knows so well. And although he made pottery, Picasso showed little interest in folk art as such, his attention drawn rather to what was tribal, primitive, and exotic, when it was not—and even when it was—radically urban. 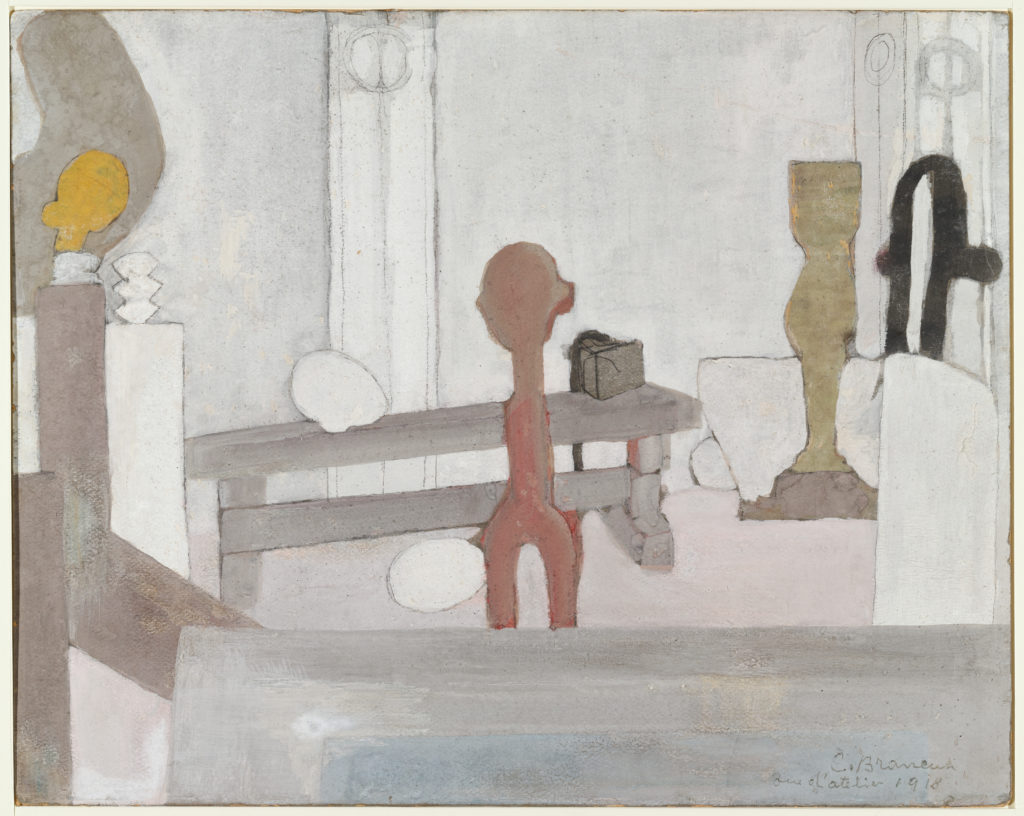 Brancusi, by contrast, had a simpler and more stable soul. The son of peasants, he never lost a sense of deep connectedness to the earth, to his native land, and to the folk art that, for many years, was the only art he would ever see. Growing up in a region of the Carpathian Mountains famous for its wooden sculptures, young Constantin relieved the tedium of tending his family’s sheep by whittling his first carvings after the manner of local folk artists. Half a century later, The Cock (Fig. 2), a schematic bird carved from cherry wood, together with his slightly earlier Endless Column series (Fig. 1)—truncated wooden lozenges stacked one atop another—confirms the perpetuity of this interest. Eventually, his talent was recognized, and a wealthy patron sponsored him to attend a local art school. But Brancusi dreamed of a wider world, and in due course he reached Bucharest, before continuing on to Munich in 1903, and a year later to Paris, which, in true peasant fashion, he reached on foot. Even in Paris, however, he often dressed like a Romanian provincial and his lodgings were decked out with simple wooden tables and chairs that he himself had made in conformity with the rustic lodgings of his youth.

And yet, from the very depths of this displaced shepherd’s soul would rise some of the most radical, innovative, and sincerely modern art of the first half of the twentieth century. Indeed, it is quite possible that, at the time of its creation, there was no work of Western art as sincerely radical as Brancusi’s Kiss. He created the first version early in 1907, when Picasso was just emerging from his rose period and still sustaining himself on the absinthial vapors of late symbolism. 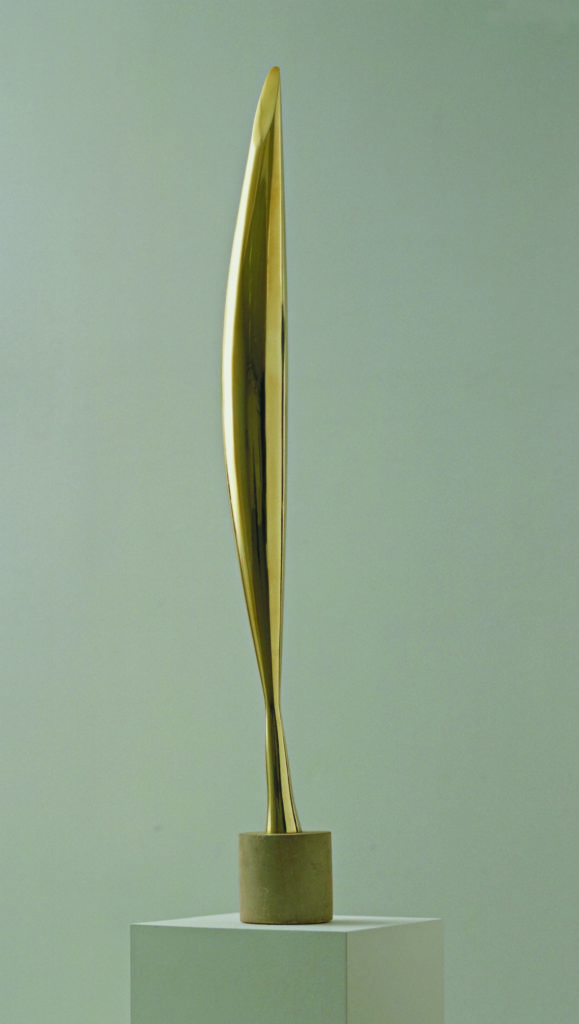 It is not easy to generalize about the sculptures of either man, since they were both so prolific over so long a period, notwithstanding that Brancusi largely retired from art production in the last decade or so of his life. But in a general way Picasso constructs his sculptures out of the detritus of modern urban life. Never an abstract artist even in his paintings, he seems to have exploited form rarely for its own sake, but rather as a means of communicating a message that, more often than not, was rife with irony. Painting was the serious business of Picasso’s life and, as wondrous as his sculpture is, one rarely has the sense that his life depended on it.

With Brancusi, however, one perceives such a commitment in every atom of his art. If Picasso rather than Brancusi had created Princess X (1915–1916), a work that, by universal consent, looks mightily phallic, we should have no doubt as to its impishly subversive intent. A similar subversion might attach equally to Brancusi’s marble Mlle Pogany of 1912 (Fig. 3), or to the bronze version from one year later in the Modern’s exhibition. And yet, knowing that Brancusi was their author, we may still wonder what he was up to, but we feel reassured as to the essential purity and high-mindedness of his motives. For Brancusi’s art emerges from his materials and these materials emerge from the earth itself. His sculptures are dense and solid, consistently rejecting the open-work aesthetic that Picasso introduced so crucially into the language of modern sculpture. 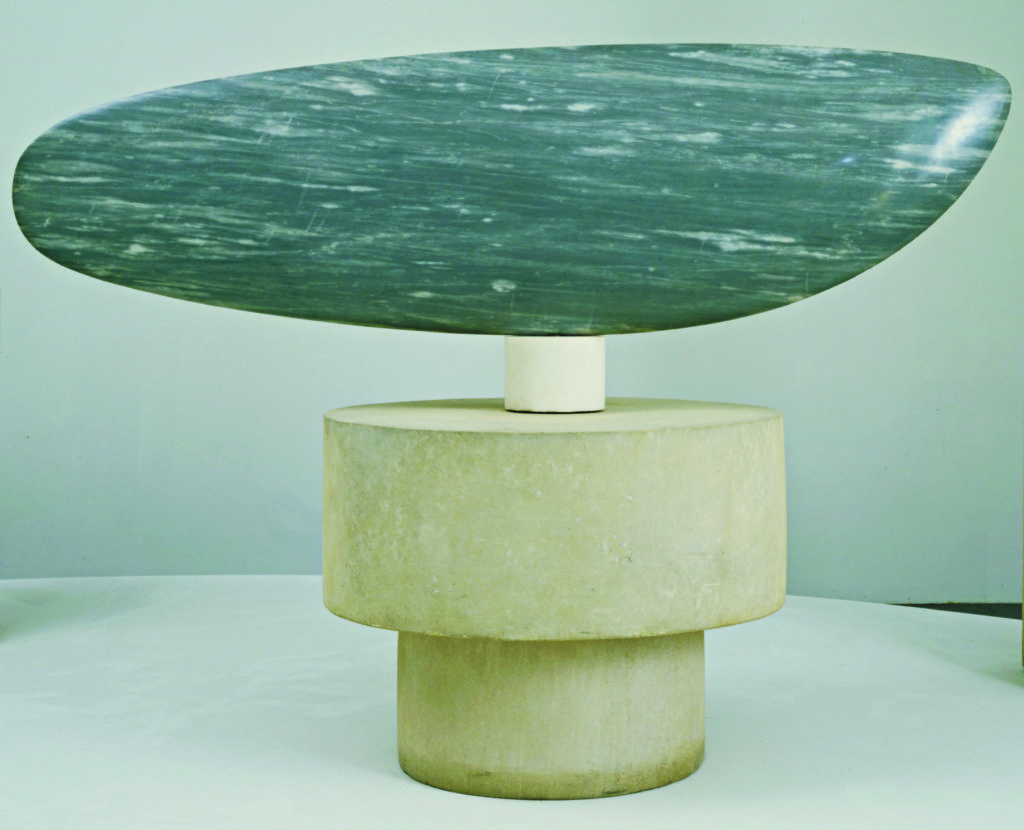 This is true even of the bronze Bird in Space of 1928 (Fig. 5) and the marble Fish (Fig. 6) of two years later. In their respective materials, they have attained a degree of burnished perfection that calls to mind the concave mirrors of NASA’s Hubble Telescope or the latest semiconductors from Silicon Valley. But for their titles, they could certainly be mistaken for exercises in abstraction. Brancusi, however, would have none of it. “Il y a des imbéciles qui définissent mon œuvre comme abstraite,” he harrumphed: “Some imbeciles define my work as abstract.” Nevertheless, as these works attest, in the way of abstraction, Brancusi went as far as, if not further than, any Western sculptor had ever gone before. At the same time, he never relinquished the peasant’s sense of the earth beneath his feet or the folk artist’s ability to draw inspiration from the most elementary forms and living things.

Constantin Brancusi Sculpture is on view at the Museum of Modern Art in New York from July 22 through February 24, 2019.