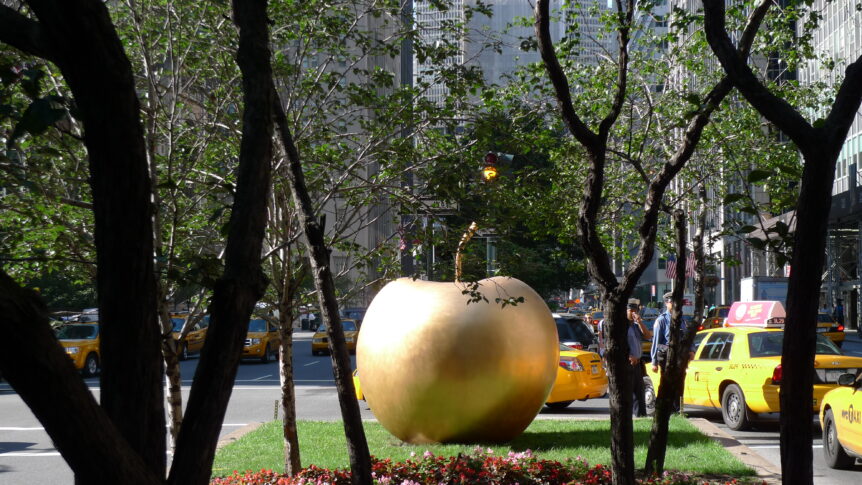 Main de roman, an exquisite little sculpture—patinated and gilt bronze, a bird perched on a hand—could easily have been overlooked in the commercial fervor of this spring’s edition of TEFAF New York, but it stood out in L’Arcen Seine’s gallery booth as a memorial to Les Lalanne, the sculpting and design duo who created a universe of lyrical and iconoclastic objects in stubborn defiance of art world trends for over half a century.

François-Xavier Lalanne died in 2008 but his wife, Claude, continued to work until her death in Fontainebleau this April. She was ninety-three years old and it is her passing which is being marked here. Claude was best known for her fantastical sculptures of flora and fauna, many of them functional, executed in a style that could be called surrealism with a smile: polished bronze tables with gilded surfaces mimicking crocodile skin; cabbages on chicken legs; apples on a heroic scale, like the monumental Pomme de New York displayed on the Park Avenue median a little over a decade ago. “I dream when I am awake,” she once said. “There’s nothing left over by night.”

Claude Jacqueline Georgette Dupeux was born into an artistic family in Paris in 1924. Her mother was a conservatory trained pianist, an uncle served as chorus master at l’Opéra de Paris, and her father, sometimes described as a gold broker,was a free spirit and mystic who conducted alchemical experiments. As a young woman, she studied architecture at the École des Beaux-Arts and the École des Arts Décoratifs. In 1952 she met François-Xavier Lalanne (she was married at that time to the architect Jean Kling and they had three daughters) and over the next few years they collaborated on an array of projects, often working for giants in couture like Dior, constructing decorative figures and props, and creating window dressings for stores like Le Printemps. In 1964, they built the soldered-metal and life-sized horses for Bejart’s choreography in the Damnation of Faust. As a chic young couple, they lived together in Montparnasse where their neighbors included Jean Tinguely, Niki de Saint Phalle, Max Ernst, and Constantin Brancusi who would stop by at night with vodka and colored Sobranie cigarettes made in Russia. Together, they put on their first show in 1956 and were married in 1967; then moving to a village in the countryside. At about that time they began to go by the name Les Lalanne and since then the “Lalanne” stamp has appeared on the work of both.

Their artistic relationship was unique—working in tandem but in separate studios, sharing a love of craftsmanship and respect for materials. Inspiring one another, they were girded against the pressures of faddishness, particularly abstraction. Their beautiful, droll, and eccentric objects were derived from simple organic shapes and lines in botany and zoology, hovering between design and art.

At first, Main de roman might be mistaken for conventional statuary, the kind you see in a public garden. Claude created her portion of it, the hand, by using the lost wax process of casting and then she gilded the piece, immersing it in electrified copper sulfate. It rests on its side and the skin, fingernails, and even the cuticles are as detailed as a work of hyperrealism. In contrast, François-Xavier’s portion, the sleek bronze bird, has the quality of the creature in Henri Rousseau’s Dream. The piece represents the fusion of two artistic entities, similar in mindset but not in style; the two independent parts are telling the story about a fleeting moment of chance and connection, together and separately. The extended hand and whimsical bird are of course metaphors for the relationship of equally independent partners who found their way both through nonchalance and craft.

When Claude’s death was announced in Le Monde on April 11, her French gallerist and longtime friend Jean-Gabriel Mitterand described her personality as a fortress defended against bad taste and pretention. The fortress safe-guarded the couple’s privacy while they went about the task of creating art that fused intimacy and beauty with the underpinning of consummate craftsmanship. Although they seldom worked together on single pieces, on the occasion when it happened, they created magic.