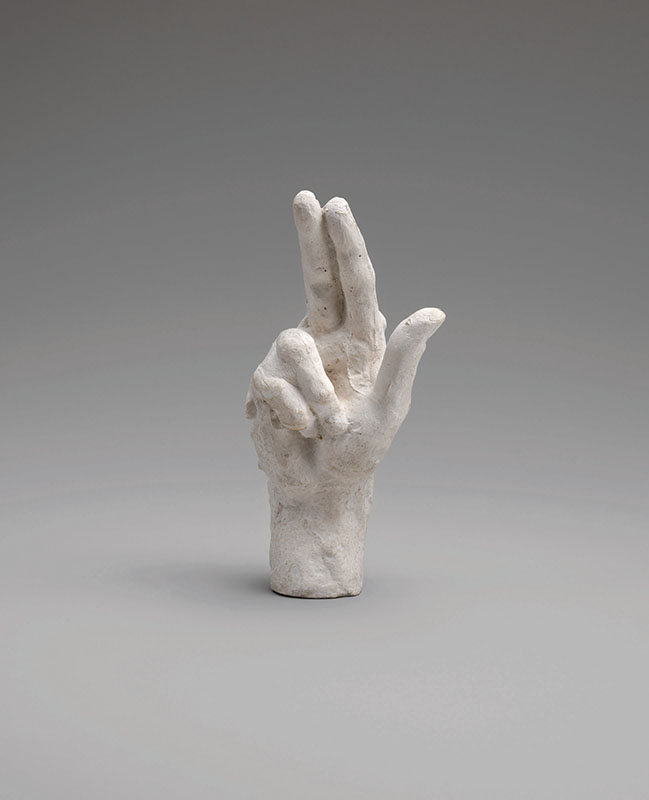 Painting—and not sculpture— was the battleground where modernism fought and won its most glorious wars. It is a curious thing about Western art that, through all those decades when Courbet, Monet, and Matisse were flinging their pots of paint in the public’s face—as Ruskin famously said of Whistler—sculpture serenely carried on with little or no controversy. This is hardly to suggest that sculpture interested the nineteenth century any less than painting did: indeed, no period of Western art, in terms of sheer tonnage, produced it in greater abundance. Only with Brancusi’s The Kiss of 1907 and Picasso’s cardboard guitar of 1912, however, did sculpture start to challenge received taste as impertinently as painting had been doing for generations.

Somewhere in this equation stands Auguste Rodin, the subject of a new show, Rodin in the United States: Confronting the Modern, which is now at the Clark Art Institute in Williamstown, Massachusetts, and moves next to the High Museum of Art in Atlanta. As the show demonstrates, Rodin remains so eminent and pervasive a presence both here and abroad that, even today, we tend to overlook the essential oddity of his career and the irresoluble ambiguity of his place in the history of art.

He did not, of course, emerge in a vacuum. He came of age during what was known as la statumanie. Throughout the nineteenth century, but especially its latter half, a veritable fever of sculpting and casting consumed the West. From Saint Petersburg to the American South, statues of great, gesticulating figures, sitting, standing, or mounted, dominated the public spaces of the world. And yet, even these, in their tens of thousands, were as nothing compared to the statuary that adorned the great buildings of the age, from the Nouveau Louvre of Napoleon III to the Palazzo di Giustizia in Rome and the Victoria and Albert Museum in London.

Rodin represents the logical embodiment of this passion. But even as he does so, he remains an enigma. The impressionists can be compared to one another, as well as to such rebellious forebears as David and Courbet. Rodin, however, claimed allegiance to no discernible school or movement. He seemed to stand alone, bestowing upon the world a supremely idiosyncratic art that it didn’t even realize it needed or wanted until he supplied it. In his colossal ambition, in the arrogance of his authority, he recalls Michelangelo and Bernini lording over Rome in the sixteenth and seventeenth centuries. But a more proximate analogy is Antonio Canova, whose renown, in the early nineteenth century, reached well beyond the shores of Europe. Like Canova, Rodin was, in his day, the most famous living artist in the world.

The energy with which American collectors invested in Rodin—including the scores of bronze, marble, and plaster works in the present show, together with drawings and watercolors— attests to his preeminence. As early as 1876, his work was being shown in this country. Soon wealthy Americans like Katherine Seney Simpson were sitting for a portrait bust (Fig. 6), and Henry Adams was comparing him to Michelangelo. In 1912 the Metropolitan Museum devoted an entire gallery to him, an unheard-of honor for a living artist. And little more than a decade after his death in 1917, the Rodin Museum opened in Philadelphia, filled with the collection of Jules and Etta Wedell Mastbaum.

Rodin certainly looks like a modernist, as the title of the present show suggests. But the arc of his career differed fundamentally from that of his modernist contemporaries. If Cézanne and van Gogh went to their graves expecting that few people would know that they had ever existed, Rodin spent most of his life being lionized on two continents. Such hardships as he encountered early on were really no greater than what any twenty-something might confront in the struggle to establish himself in a new career. The son of workingclass parents, Rodin was born in Paris in 1840 and was largely self-taught. By the age of thirtysix, however, his heroic male nude The Age of Bronze appeared in the Salon of 1877, bringing controversy, but also fame. Four years later he won the commission that became The Gates of Hell (intended to adorn the facade of a fine arts museum that was never built). Best known for its statue of The Thinker (Fig. 7), this commission was perhaps the largest and most illustrious sculptural undertaking of the age. Other honors soon followed. In 1889, the year in which he completed The Burghers of Calais and began his monument to Victor Hugo, Rodin served as a juror in the annual Salon, perhaps the greatest warrant of success that nineteenth-century France could confer upon an artist. Two years after that, he began his bronze monument to Balzac, one of whose iterations now stands near the intersection of the Boulevard de Montparnasse and the Boulevard Raspail in Paris’s Seventh Arrondissement.

Though Rodin does indeed stand alone, he was also a creature of his age, and his age, in sculpture no less than in music and poetry, was that of symbolism, which dominated Western culture from the 1880s to the outbreak of the First World War. Like his revered Michelangelo, he chose ever and always to portray the human form: nothing else interested him, neither plant, nor animal, nor any manmade object. Oscillating between the finely observed standing figure in The Age of Bronze and the head of Balzac (Fig. 11) on the one hand and the spiritualized indeterminacy of Christ and Mary Magdalene (Fig. 13) on the other, Rodin managed in both cases to efface the particulars of his subjects—those particulars that so engaged Jean-Baptiste Carpeaux and Charles Cordier a generation earlier—in his pursuit of pure emotive power. And it is in this effacement of particulars, this affinity for physicalized abstraction, that Rodin reveals his adherence to symbolism.

But the form that such emotional reductivism assumed in his works differed from that of his contemporaries. The paintings of Gustave Moreau, the early verse of William Butler Yeats, the tone poems of Claude Debussy all enshrine a blanched, etherealized vision of the human condition. In Rodin, by contrast, the human form is contorted into shapes that can hardly be reconciled with ordinary human experience. The musculature and the bones of The Burghers of Calais, The Walking Man (Fig. 3), and Saint John the Baptist (Fig. 2) are exaggerated almost beyond recognition. The brows of his figures assume an almost simian prominence. With their thick wrists and bony knuckles, their hands seem more like mallets than like ordinary human appendages.

If none of his contemporaries resembled him in this regard, his influence, nevertheless, was prodigious. He bequeathed that intimation of force to the next generation of sculptors, not only to Antoine Bourdelle and Paul Landowski, his direct disciples, but, farther afield, to such diverse talents as Medardo Rosso in Italy, George Minne in Belgium, and Gustav Vigeland in Norway. But this strain of art died out with symbolism, and meant ever less to the generation that came of age during and after the Great War. If Rodin was indeed the progenitor of modern sculpture, as is often claimed, he deserves that distinction mainly in the sense that his combative spirit, his insistence upon the sovereignty of individual vision, created the context in which later generations would betray and then ignore his overpowering persona.

Rodin in the United States: Confronting the Modern is on view at the Clark Art Institute in Williamstown, Massachusetts, to September 18. The exhibition will be on view at the High Museum of Art in Atlanta from October 21 to January 15, 2023.