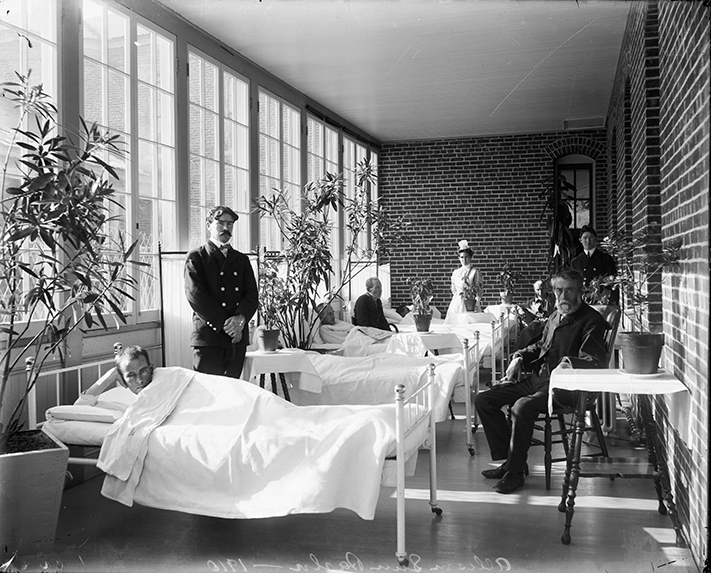 “We are not sent into this world mainly to enjoy the loveliness therein, nor to sit us down in passive ease; no, we were sent here for action.”

This Twitter-ready line appears in a remarkable exhibition entitled Architecture of an Asylum, now on view at the National Building Museum in Washington, DC. The quote, drawn from the early correspondence of the nineteenth-century activist Dorothea Dix, is placed just above a little desk that she owned. As antique furniture goes, it is not much to look at: four simply turned legs; a drawer; two square wells, for ink and pounce. Despite its diminutive stature, however, the desk is a fitting centerpiece for the show, for it was, in its time, the platform for dramatic change. 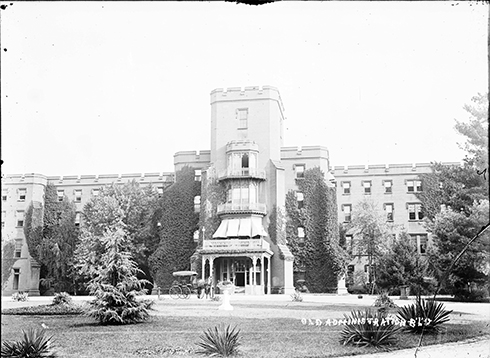 A 1900 photograph shows the Center Building at St. Elizabeths, which housed both offices for hospital administrators and wards for patients. National Archives and Records Administration, Washington DC.

Sitting at this desk, Dix drafted the legislation that would authorize a federal mental health hospital: the US government’s first substantial commitment to care for people who were then known as “lunatics.” The institution that resulted, the Government Hospital for the Insane—later known as St. Elizabeths—opened in 1855; and the exhibition is a narrative of its rise and fall. It is, in the words of curator Sarah Leavitt, a story of “the infrastructure for care of the mentally ill that the US built and then destroyed.”1

Though several years in the planning—originally conceived as a showcase of the architectural drawings related to St. Elizabeths, and only gradually expanded to tell a broader story—the exhibition is almost eerily well-timed to the present moment. For health care is once again dividing the country.

At this writing, the Republican-led effort to overhaul health care had foundered in the Senate. The bill would have rolled back insurance coverage for millions of Americans, mainly through the reduction of funding to Medicaid. Psychiatric care would have been particularly hard-hit, prompting expressions of deep concern from professional organizations.2 The battle may be over, but the war is certain to continue; President Trump has threatened to let Obamacare “implode,” and further attempts at reform will doubtless be made. Given the scale and complexity of the issues involved, health care provision is likely to remain one of the most highly charged issues facing the country—which, given the tenor of the times, is saying a lot. It is worth remembering how we got here.

A 1910 photograph captures the porches of the 1890s Allison Buildings that had been enclosed to provide more space for patient beds. National Archives and Records Administration.

Dix and her reformist allies in the nineteenth century sought to establish a new concept: “moral treatment,” that would address a patient’s whole way of life, not just the illness. Previously, those with severe psychiatric disorders had simply been walled away in prisons, or in asylums that were little better. Or they had lived at home, or in the streets, with predictably disruptive results. The reformers successfully advanced the argument for centralized, state-run hospitals, located away from urban centers.

St. Elizabeths was the first of these: a beautiful building for 250 patients adorned with uplifting ornament. Over ensuing decades the aesthetics of moral treatment would be further refined by other advocates, who recommended campuses of smaller, cottage-like buildings. These ideas were implemented at St. Elizabeths, as was a new ideal of self-sufficiency. Residents took on the tasks of growing their own food, cleaning their own laundry, and making their own furniture and clothing.

It was a time of positive change, but St. Elizabeths was by no means perfect. The institution was riven by prejudice—segregated by race and gender—and scientific understanding of mental illness was still in its infancy. The Building Museum’s exhibition includes some disturbing material about now-discredited treatments. Yet there was also a concerted effort to ensure holistic care.

As it happens, Dix was also a great believer in the inculcation of moral rectitude through the understanding of “common things,” and decorative arts played a key role at St. Elizabeths in its early days.3 Yet, as the population of the hospital grew, delicate oral china gave way to heavy, hard-to-break crockery. By the 1940s and‘50s, the interior appointments of the new hospital buildings at the site could be considered “modernist—if you squint,” as Leavitt puts it. Yet this stripping down of the decor was not a reflection of Bauhaus influence; it was the result of an overall decline in resources.

The cost-cutting has carried on, more or less unabated, to the present day. Even without the significant reductions that will occur if the AHCA becomes law, America’s existing mental health care provision is a shambles. Many more mentally ill people are in prison than in state hospitals, and while exact numbers are difficult to establish, between 10 and 25 percent of those incarcerated suffer from some form of serious psychiatric disorder.4 I asked Leavitt what she thought Dorothea Dix would have made of our present situation. After a moment of consideration, she replied, “Dix thought that there would be a straight line of forward progress, and I don’t think that has happened. I don’t think anyone would say that we have solved this problem.”

The Center Building in a photograph from 2016. Plans to retain as much of the interior as possible were hampered by the discovery that the original building materials and structural system were in far worse condition than expected. © Colin Winterbottom.

Toward the end of the Architecture of an Asylum exhibition, there is a stunning image taken by the photographer Colin Winterbottom, showing the gutted 1855 Center Building at St. Elizabeths. (The building will soon find another use, as the new headquarters of the Department of Homeland Security.) Nearby, a text panel reminds visitors of the pioneering reforms that Dix initiated in the nineteenth century: “Today, the architectural legacy of that movement is mostly gone. We still struggle to find answers to what many believe is a mental health care crisis.”

There is no getting around the fact that proper psychiatric treatment is expensive. And though that expenditure is proven to be a good long-term investment—it reduces violence, incarceration, and other problems—it seems to be very difficult to mobilize public attention to the problem, and hence support for sufficient funding. Leavitt’s exhibition offers no easy answers to this quandary, but it does serve to remind us of our own place within a difficult history. Dix was tragically prescient when she wrote, in 1845, “the best system ever devised by human wisdom, if badly administered, may become the fruitful source of almost incredible miseries and corruption.”5 In returning to her words and works, it seems, we still have a lot to learn.