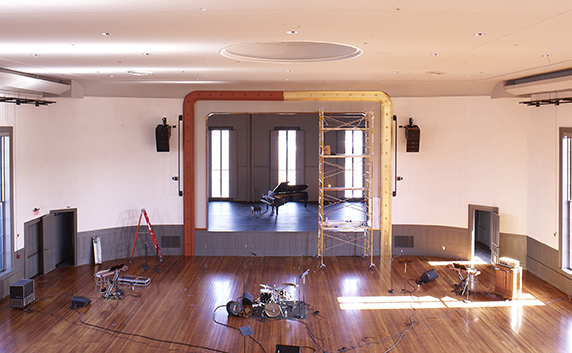 With photography by Pieter Estersohn.

Amber-colored floorboards are reverberating with sound again in an 1850s performance space in Hudson, New York. Long known as the Hudson Opera House (and recently rechristened Hudson Hall), the Greek revival brick building ranks as the state’s oldest surviving theater. On a recent blustery afternoon, musicians stood stationed at Hammond organs around the second-floor main auditorium. They played a rib-shaking contemporary piece meant to evoke the sound of Niagara Falls, to be performed at one of numerous spring concerts celebrating the completion of the building’s yearlong, $8.5 million refurbishment. A few floorboards were sprinkled with wispy gold flakes while Bill Borman, who runs a Hudson decorative painting studio, finished gilding the proscenium carved with rondels.

Fig. 2. Warren Street facade of Hudson Hall in a 2015 photograph. Designed by architect Peter H. Avery, the building was opened in 1855 as Hudson’s City Hall. Photograph by Robert Umenhofer.

Fig. 2a. It has long been known as the Hudson Opera House. Estersohn photograph.

The pounding rush of keyboard sounds, the rising tide of gold on the proscenium in the cream and dove-gray room—it was all just another relatively uneventful day at a structure that has been adapted again and again for changing management and tastes in public spectacles. Since it opened in 1855, the hall has remained in nearly continuous use, for events ranging from abolitionist rallies to acrobatics contests to poultry shows. The building’s various names over the years have included the Auditorium, Elks Theatre, Moose Lodge, and City Hall. Among the celebrities who have visited the stage are Teddy Roosevelt, suffragists Susan B. Anthony and Elizabeth Cady Stanton, writers Bret Harte and Ralph Waldo Emerson, and the autistic former slave-turned-piano- prodigy Thomas Wiggins, known as Blind Tom.

Gary Schiro, the hall’s executive director, joked during a preview tour that if any ghosts of the historical figures passing through have remained in residence, they apparently enjoy visitors. “There’s nothing happier than when the building is crowded with people,” he says.

He took the job in 1998, a few years after a nonprofit group became stewards of the moldering building. It had been neglected since the 1960s, when Hudson’s government, which had used the building as the city hall, moved its offices to a neoclassical former bank nearby. In the last few years, Schiro and co-director Tambra Dillon have raised funds for restoration and renovation with omnivorous vigor—pulling in grants and donations from government agencies, individuals, and foundations. Hudson and the surrounding Columbia County, meanwhile, have emerged as creative capitals, populated by transplants from costlier places like Brooklyn. “We’re super fortunate to be reopening the building just as Hudson’s flourishing as a center of artistic activity,” Dillon says.

Fig. 3. Restoration of the stenciling and gold leaf ornament of the proscenium, executed by Bill Borman of Design Red, in progress earlier this year. Borman worked with composite leaf, made with an alloy of zinc and copper, that is meant to imitate eighteen-karat gold. Photograph by Alexandre Petraglia.

Hudson Hall stands on the main drag, Warren Street, which is lined with buildings in a medley of nineteenth-century styles, from Beaux Arts to Italianate to Gothic revival. In the storefronts, restaurants, art galleries, and antiques shops tempt passersby. The theater’s enormous windows overlook steeples, mansard roofs, and cupolas—against a backdrop of the undulating riverfront hills that have attracted landscape artists since the early eighteenth century. Etsy and Princeton Architectural Press have settled in Hudson, employing scads of hipsters. The region’s restored tourist attractions include nineteenth-century artists’ estates-turnedmuseums—Frederic Edwin Church’s Olana, Thomas Cole’s Cedar Grove—as well as Basilica Hudson and Lumberyard, two waterside industrial complexes that have been converted into art centers.

Fig. 4. A performance of Aunt Dinah’s Quilting Party in a 1919 photograph. Note the original stenciling on the proscenium—and the emergency stairs below the stage, which led down to the front doors. Photograph courtesy Hudson Hall.

Dillon compares reviving the downtown structure on an $8.5 million budget to “trying to squeeze our foot” into a tight shoe. In the 1850s Hudsonians splurged for tens of thousands of dollars to commission the imposing building from a little-known local architect, Peter H. Avery. An arched niche in the pediment’s tympanum was supposed to contain a bas-relief of Henry Hudson, but for unknown reasons it was never installed. City Hall occupied downstairs offices, and other tenants over the years included a bank, pharmacy, telegraph station, post office, library, and police department. (Vault doors for the walk-in bank safes have survived, and the basement floor has outlines of jail cells.) The theater, with ceilings measuring twenty-seven feet high, accommodated government meetings and performances. Along with edifying lectures and plays like Uncle Tom’s Cabin came magicians, vaudevillians in blackface, tightrope walkers, gymnasts, bicyclists, billiards players, golfers, wrestlers, boxers, dog breeders, and livestock exhibitors.

Marathon walkers, after calculating that twenty-six laps around the theater amounted to a mile, gave demonstrations there. Temperance activists, upon finishing their thundering speeches in the hall, were sometimes exposed as binge drinkers themselves. By the 1890s movies were playing under the proscenium, and high-tech electric lights had been installed around the stage. But competition from elaborate movie palaces and more capacious theaters in the vicinity gradually reduced the box-office take at the hall. By the time Schiro arrived, the building was used as storage space for a developer’s mounds of architectural salvage.

Fig. 7. The oculus, pre-restoration, 2015. The center of the oculus was removed sometime in the mid-twentieth century, most likely in the 1940s, to install an exhaust fan. It was presumed destroyed until construction workers found it during the restoration process, hidden in the rafters of the building. The missing piece was repaired and returned to its rightful position in 2016 (see Fig. 6). Umenhofer photograph.

Schiro’s team embarked on phase after phase of restoration with Marilyn E. Kaplan, who runs Preservation Architecture, an Albany firm. When she first toured the property, roofing was failing and drainpipes had frozen: “There was water pouring in,” she recalls. But from the beginning, she adds, she admired the hall’s versatility and felt optimistic about its prospects: “What a spectrum of use, from basketball to poultry and everything in between.”

Fig. 8. From 1869 until at least 1908, the First National Bank of Hudson occupied the north storefront space of Hudson Hall, as seen in this photograph of c. 1869. Hudson Hall photograph.

In the last fast-track year, the work crews (headed by Massachusetts-based Consigli Construction) have woven new mechanicals and steel-frame reinforcements through the hewn attic beams and basement masonry crawlspaces. The building’s first elevator has been tucked into a new brick tower at the back, on a snippet of land where a garage stood. Original ornamentation downstairs has been revealed or re-created: dusty rose encaustic floor tiles, planes of white marble wainscoting, ceilings with stenciled floral bands, plaster scallops, and tin roses. Chinoiserie fretwork is embossed on the metal mail slots on office door slots. Some salvaged theater seats have wire racks underneath, designed for storing hats during performances.

In the theater, Borman is adding a band of Christopher Dresser-like stenciled geometric foliage to the proscenium, modeled on a pattern used earlier at the opera house (Fig. 3). The adjacent, lightly antiqued gilding, he says, “is meant to evoke dust and age,” as if the interior were something of an archaeological find. Wooden filigree petals in foliage and floral motifs have been restored in the ceiling’s domed oculus (Fig. 6). An exhaust fan vent used to be jammed into the center of the petals: “I stared up at it for many years, cursing,” Schiro says.

Loose artifacts turned up during construction, which the staff has carefully stored away. “We call them ‘wonders in the walls,’” Dillon says, as she leafs through a binder full of tickets, cigarette packages, and other paper miscellany. A letter dated 1809 contains a Hudson burgher’s promise to take care of the poor. A newspaper clipping advertises a local milliner’s shop—its customers were probably the same people who slid their hats into the seat racks. One theater program is meticulously labeled “Not found on-site; brought in by friendly Hudsonian.” There are boxes for the three-dimensional finds: a light bulb the size of a bread loaf, the dusty brown cedar branch that was tied to the top of the building frame in celebration of its completion in the 1850s.

Dillon can envision at least one more building improvement: filling the facade’s empty niche where the sculpture of Henry Hudson was proposed in the 1850s. Maybe some kind of hologram, she says, would suit the resourceful, imaginative spirit of a place where past, present, and future dwell so comfortably together. Or perhaps, she suggests, a phoenix?

EVE M. KAHN, who wrote the antiques column for the New York Times from 2008 to 2016, is finishing a biography of the forgotten impressionist painter Mary Rogers Williams.