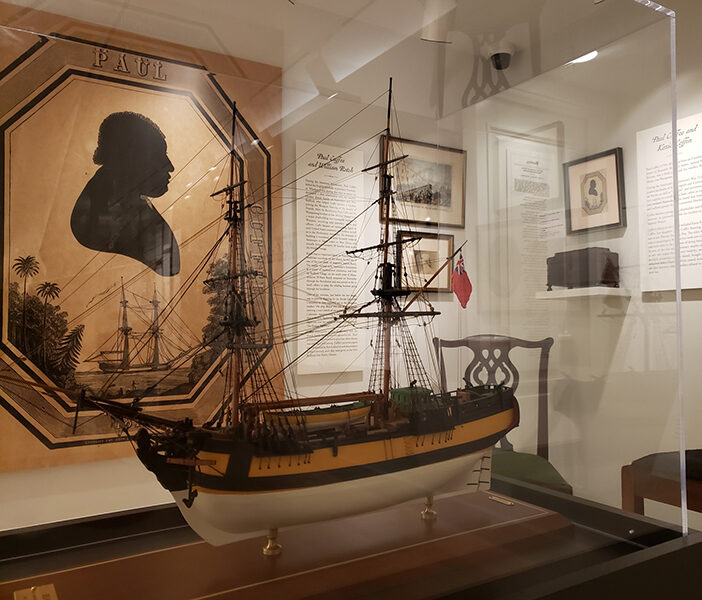 By the early 1700s, the newly converted Quakers of the island of Nantucket, some of whom were slaveholders and others who would have had contact with free Blacks through their work in the whaling industry, had begun to wrestle with the morality of chattel slavery. Following the Civil War, the same righteous ferment would animate the activities of suffragists, including Lucretia Mott (née Coffin), a childhood resident of the island. To elaborate on this history, the Nantucket Historical Association has assembled a group of objects—paintings, literary paraphernalia, sculptures, and more—from those two successive waves of activism, which helped win the vote first for Blacks, then for women.

Mott, who would go on to found the American Equal Rights Association with Elizabeth Cady Stanton and Susan B. Anthony, is represented by several likenesses, including a contemporary bust by Victoria Guerina and a pencil portrait by Heather Vance. When she was six years old Mott’s life intersected with that of Arthur Cooper—whose portrait is also in the exhibition—an escaped slave on the run. Cooper and his family were given refuge in the attic of the Coffins’ house, a formative event in the life of the young suffragist, whose Philadelphia home would later become an important stop on the Underground Railroad. Mott’s patchwork quilt, pieced in ebullient style, adds a splash of color to the exhibition. Also of interest are William Gayer’s 1710 will furnishing an enslaved servant called Africa with property, and a three-sixteenths-scale model of the Beaver, a whaling and merchant vessel that was ransacked during the Boston Tea Party.

The association has taken pains to ensure that visitors leave the Whaling Museum—where the exhibition is on view—as healthy as they arrive, including installing high-efficiency air filters, frequently disinfecting doorknobs and other architectural details that may have been handled, and monitoring crowd behavior. “Our goal is for you to walk into the museum and not touch anything from start to finish,” says NHA executive director James Russell. It’s an ironic reversal of recent museological exercises aimed at making people’s experiences at museums more hands-on, but in the era of Covid-19 “do not touch” is once again the best policy.