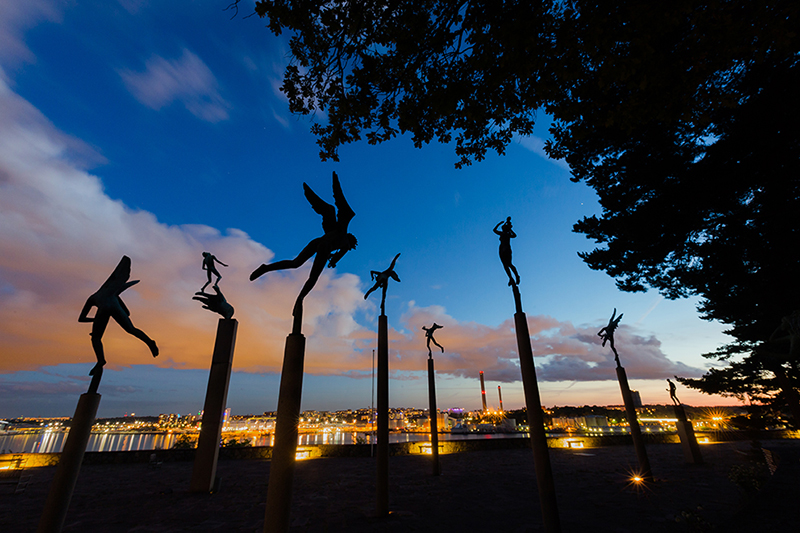 Carl is a sculptor—probably the greatest,” wrote Frank Lloyd Wright of the Swedish sculptor Carl Milles. And while Milles’s sculptures are exhibited around the world, including at Cranbrook Academy near Detroit—where he met Wright—and in New York City’s Rockefeller Center and at the city hall in St. Paul, Minnesota, his masterpiece is Millesgården: the museum, studio, gallery, sculpture garden, and home he cultivated for nearly fifty years.

Milles was born near Uppsala, Sweden, in 1875. A poor student, he was encouraged by his father to take up a trade instead, and learned woodworking. He excelled, won a grant, and with those earnings took off to Paris in 1897. He cobbled together odd jobs carving coffins and ornamental cabinetry, rented a cheap studio where he made some small sculptures, and studied anatomy at the École des Beaux-Arts. It was during this time that he transformed himself from a carpenter into an artist. His work was admitted to the prestigious Salon in Paris, and he soon secured a spot working in the studio of Auguste Rodin. While in Paris, he also fell in love with an Austrian painter named Olga Granner; they married in 1905. A year later, the couple returned to Sweden and bought land on the craggy island of Lidingo, overlooking Lake Vartan, that would become the home for Millesgården.

Soon cities all over Sweden were clamoring for a sculpture by Milles. In 1927 London’s Tate Gallery granted him a solo exhibition, the first devoted to a non-British citizen. As his reputation grew, so did his commissions. He used his earnings to buy more land and embellish his property. “I am building my Italy here,” he wrote of the country he would visit almost every year of his adult life. He terraced the steep land, planting sculptural pine trees and spires of arborvitae (resembling the cypresses that punctuate the Italian landscape, but hardy enough to survive the Scandinavian climate), and spent hours dreaming up original settings for his sculptures, many of which rest atop tall pedestals of varying heights. “We do not have forks nor sheets,” laments Olga in a letter, “but the columns, Carl can always afford to buy.”

In 1931 Milles decamped for America with his wife, courted by patron George Booth to teach at the nascent Cranbrook Academy of Art in Michigan. This was a transformative period for the sculptor according to Millesgården director Onita Wass. The couple spent the next two decades in the Midwest, befriending architects Wright and Eliel Saarinen. “He relaxes, Olga relaxes,” Wass says, noting that this is the period when she sees the first photographs of Milles laughing. A cunning businessman, he convinced Booth and the Cranbrook Foundation to purchase sixty-three sculptures to be displayed on the campus.  “His work became more modern when he came to America,” Wass adds.

For every sculpture he made,” she says, Milles always “cast one for Millesgården.” Pieces like the Jonah and the Whale and St. Martin are animated with personality and humor. A stunned and rotund Jonah leaps out of the whale’s mouth; an angel at the feet of St. Martin sports a wristwatch and scratches a mosquito bite (Fig. 3). Poseidon, says Wass, resembles “an old sailor who’s perhaps had too much to drink” (Fig. 2). Despite being a continent away, Milles corresponded frequently with his half-brother Evert, an architect in Sweden, sending letters and drawings about every detail of the Millesgården property and the placement of the sculptures. Having no children, the couple donated Millesgården to the Swedish people in 1936, and gave the rights to cast additional sculptures to the foundation that runs the museum (the foundation continues to cast works today). When Milles was seventy-six years old, he and Olga returned to Europe and together they lived at Millesgården in the summers until his death in 1955. Olga remained until 1962, and the two are buried together in a small stone chapel Milles had built on the premises.

The museum is hidden from the street, surrounded by an unassuming stone wall. When most visitors arrive, they are unaware of what awaits them inside. But once they step out onto the lower terrace, they always gasp, Wass says. They enter a phantasmagoria of sculptures: Europa rides a bull amidst a sea of mermen; Poseidon, more than twenty feet tall, towers over the harbor; angels play instruments atop towering columns; and a young man, eyes skyward, mouth agape, balances upon the upturned hand of God (Fig. 8). “That’s the aha moment,” she says of that first encounter. “It’s as if a lid that has been on top of your head has been taken off. You can breathe deeply and think different thoughts.”

After exploring the lower terrace, visitors can then climb the beautiful stone steps, planted with purple-flowering Kenilworth ivy (Fig. 7). At the apex of the property is the upper terrace, the home of the two artists, and Milles’s studio—his ode to Italy. In the gravel courtyard, purple and white rhododendrons bloom in spring, low clipped boxwood shrubs frame beds, pots of olive trees line the walkway in the warmer months, and sculptures like the Susanna Fountain, Little Triton, and Little Naiad (Fig. 11) stand among stone columns rescued from buildings in Stockholm before they were torn down. It’s the oldest part of the museum, and the most intimate in scale.

For the past decade, acclaimed Swedish landscape architect Ulf Nordfjell has been watching over the garden. Each year he designs a new planting scheme for the annual flower beds, drawing inspiration from the exuberant palette of Josef Frank, who designed some of the furniture and furnishings for “Anne’s House,” the cottage Milles had built in the early 1950s for his longtime secretary, and where the couple lived every summer after they returned from America. This year’s theme will be “bumble bees go pink,” says Nordfjell, who’s planted a floriferous blend of bubblegum-colored snapdragons, magenta dahlias, mauve-ish Verbena bonariensis, and other blooms to attract pollinators and support biodiversity. The museum is open year-round, and with the changes in flowers and foliage offers a dramatically different experience each season. “Milles was interested in this feeling that the world is bigger than you,” Wass says. Engraved on a wall at the entrance to the garden, the sculptor inscribed a prayer for the future of his masterpiece:

To the Memory of Creative Fever

To the Desire to Embellish with Art

For You, Destiny and People

The Future will tell whether the Work was Good. . . .

Humbly we ask You to Tend It Well

That through the Varying Fates of the World

It may Stand as Artists Dreamt.

Transfixed by the pageantry, fantasy, and beauty, a visitor to the garden can’t help but feel that Milles got his wish.

Melissa Ozawa is a writer and editor living in New York City. She is currently the features and garden editor at Martha Stewart Living magazine.