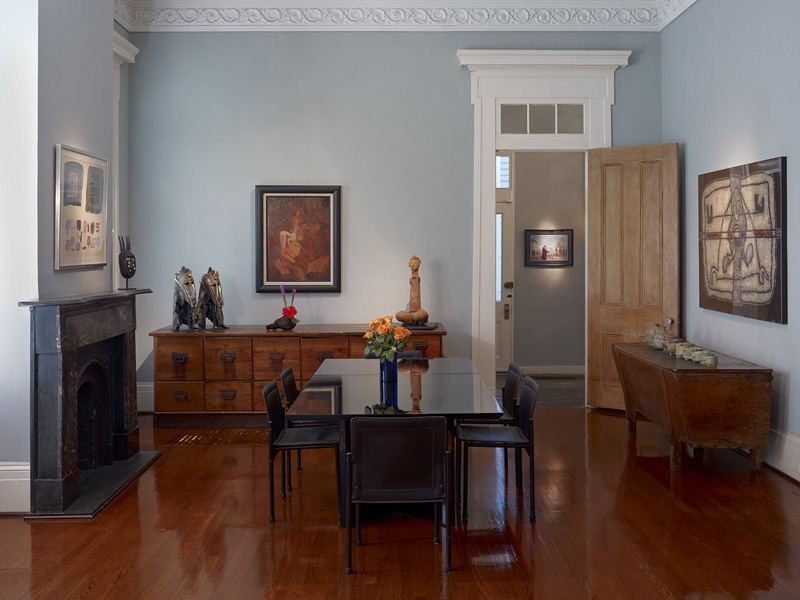 Photography by Richard Sexton | from The Magazine ANTIQUES, January/February 2013 |

Africa feels close in New Orleans. You hear it in the blue notes and polyrhythmic drumming of jazz. You taste it in the okra-laden gumbos and rice dishes of the local cuisine. You see it in a host of tra­ditional arts, from the richly beaded parading costumes of Mardi Gras Indians to the near-
ubiquitous “shotgun” house-a form that derives from African models and is perfectly suited to the sultry climate of a Gulf Coast port.

For all that, however, it is a shock to find one of the nation’s richest private collections of African art in an 1845 Greek revival house on the edge of the Garden District. Charles and Kent Davis live with Ashanti gold, the throne of a Cameroonian king, fourteenth-century terra-cottas from the Niger Bend, and hundreds of other spirit-charged works in a setting that evokes the antebellum heyday of New Orleans.

This is a house frequently visited by curators- more than thirty international institutions have borrowed objects from the Davis collection-but newcomers are excused if they double check the address upon arrival. The couple’s center-hall cottage, where they raised two children and dealt in art for decades, presents a textbook example of the nineteenth-century architectural style that defines their oak-shaded neighborhood: a portico sustained by fluted white columns, geometric millwork, a broad entablature, towering sash windows, and cast-iron railings that echo the braided forms of the district’s subtropical vegetation. The chaste revival style extends to an interior of sixteen-foot ceilings and polished oak floors, but the spacious rooms, lit by discreet track lighting, owe nothing to the Victorian passion for overstuffed decor. “We wanted collectors to see how African art fit into varied contexts, so we used our home as a demonstration,” Charles Davis says. “To do that we took out curtains, rugs, and wallpaper to reveal its architectural bones. The house was screaming to be turned loose, and we needed a minimalist setting to show work that is often very beautiful, but is also intended to teach moral messages, whip you in line, testify to the authority of kings and keep bad things at bay.”

You don’t have to be an African scholar to feel the expressive power of the objects, Kent Davis notes. “Our kids grew up with the run of the house and our son used to say ‘I sure hope these things like me.’”

Some pieces entered the Davis collection only when their numinous force waned for African owners. Charles Davis acquired the Wum helmet mask that guards his front hall after a deadly 1986 eruption at a volcanic lake in the highlands of Cameroon (Fig. 3). Thousands were killed by toxic gas, and Davis, who was in Cameroon at the time, speculates that the guardian spirit embodied in this powerful sculpture was sold off after failing to do its job. Yet even without those animist spiritual associations, the dark-hued wood and leather mask makes a strong impression. Viewed in profile, it presents a wedge of thrusting angles and counter curves in which every element-beak-like nose, lunging teeth, bulging eyes and armored brow-adds to the mask’s authority.

Works of such caliber make it clear why African carving caught the eye and influenced the style of twentieth-century modernists like Picasso. The Davis collection advances the same argument with a host of provocative juxtapositions. Here, for example, a neo-expressionist drawing by Jean-Michel Basquiat faces an eerie androgynous pair of male and female figures carved by Lobi artists in Burkina Faso. Set on a pedestal, the Lobi duo looms over the viewer-twin emblems of fertility and nurture that gain potency from the carver’s simplified, almost abstract representation of the human form. Nearby, a Kran dance mask from Liberia-male aggression distilled in a ferocious bearded countenance-rests on a marble fireplace mantel of Attic proportions (Fig. 5). Above both, a masklike portrait by Louisiana artist Robert Gordy presides. This brooding monochrome aquatint shows the influence of African forms on Gordy, who earned a national reputation in the 1970s and 1980s for work that was often exhibited alongside that of the Chicago imagists.

Gordy, who died in 1986, was one of the artists and collectors who frequently met at the Davis home to socialize, discuss their acquisitions, and view the new work that Charles Davis had brought back from Africa. Another regular was William Fagaly, the Françoise Billion Richardson Curator of African Art at the New Orleans Museum of Art. During his long tenure at the museum, Fagaly built a nationally recognized collection that includes many objects that Charles Davis found in the field. (See Ancestors of Congo Square, the splendid survey of NOMA’s holdings published by Scala in 2011.) “Kent and Charlie Davis played a huge part in making New Orleans an international destination for African art,” Fagaly says. “In the early 1970s they saw that Africa still had plenty of great work to be discovered, an attitude that wasn’t necessarily shared by the big dealers in New York, Paris, and Belgium. Charlie still had a lot to learn back then, but he cultivated friendships with tribal people, traders, and African dealers and began to bring out fabulous objects. At that point, everybody stood up and took notice and in short order he became a dealer’s dealer, supplying work to the big boys who dominated the trade.”

One measure of Davis’s place in the field is his success at uncovering works by Olowe of Ise, a Yoruba court artist who learned to carve before 1900 and created pieces for a succession of monarchs. By his death, in 1938, Olowe was already known in the West, and he remains one of the few African artists whom scholars identify by name. Of the approximately forty extant works by Olowe, seven published pieces have passed through Davis’s hands, including objects now at NOMA, the Minneapolis Institute of Arts, and the Museum of Fine Arts, Boston. One Olowe sculpture stands in his front parlor (Fig. 9).

New Orleans art lovers also took note of Charles Davis’s efforts and bought work from him, Fagaly says. By 1989 the curator was able to draw from thirty local collections for a touring museum exhibition-and the size and scope of those private holdings have only increased in succeeding years. “New Orleans isn’t unique, but we have all the elements of an international center: a committed museum, focused collectors, a great dealer, and three universities that teach about African art. Of course, the city has something else, too: we’re connected to African culture through our food, our music, and our joie de vivre. Charlie and Kent Davis share that outlook. It’s a perfect example of synergy.”

In the Davis residence, context serves to underscore the aesthetic appeal of African art. A canvas by American cubist Manierre Dawson, executed in tawny hues, complements the rich earth tones of a Bankoni terra-cotta sculpture from Mali. A beaded sword sheath, created for a Yoruba royal (Fig. 10), would fit comfortably in the regalia of a Mardi Gras Indian chief from a New Orleans neighborhood. “This kind of beadwork is not meant to give the eye a rest,” Charles Davis says. “Going over the top with color, detail and a profusion of imagery is an aspect of the African aesthetic that definitely survives in New Orleans.”

In one of the collection’s most remarkable groupings, a pair of clean-lined art deco chairs by Walter Von Nessen stands alongside a drum-shaped wooden throne from Cameroon (Fig. 8). The contrast is deliberately startling. It is as if the collectors meant to show the full range of wood as an expressive medium. The modernist piece is sleek and simple, an Apollonian celebration of curvilinear form. The Babanki royal throne, carved from a single log and decorated with glass beads, shells, and coins, is a complex intertwined openwork frieze of animal and human figures: a ranked vision of nature and man worthy of comparison to a Romanesque tympanum.

Interspersed amid their African holdings, the couple has hung a closely focused collection of a dozen vintage photographs, including images by Paul Strand, Cartier-Bresson, and others. “Most African art is monochromatic. It’s form-oriented-and that’s a way of looking at things that felt very natural when we began to collect black-and-white photography,” Charles Davis says.

Some photographs in the Davis collection appear to echo African concerns. To see Irving Penn’s Cuzco Children in this context, for example, recalls the frequent appearance of twin figures and couples in sub-Saharan art. In other cases the photographs offer a palate-cleansing visual refreshment. Ansel Adams’s Moonrise, Hernandez, New Mexico hangs beside a boldly carved commemorative sculpture of a Bangwa king enthroned and decked in bangles (Fig. 7). The photograph thrills with its fine-grained details; the Cameroonian sculpture commands with its boldly simplified forms and direct address.

Photography is not an afterthought in this collection. Charles and Kent Davis made their first trip to Africa in 1970, planning to photograph wildlife. As a young man, Davis built his own underwater camera. He photographed his flood-ravaged city after Hurricane Katrina in 2005, and he has documented every one of the ten thousand African works that have passed through his hands: an archive that he uses to verify the authenticity and quality of new works.

“When you have a great object, you don’t have to cheat with lighting and selected angles. In fact, you can’t take a bad photograph of it. The object sings,” Davis says. But objects are not everything for Charles Davis. He also celebrates the satisfactions of the hunt. “The most important things I collected were people. I worked closely with African runners and antiquaires. I didn’t sidestep anyone. And I wasn’t afraid to pay top dollar. That’s how you get to see the best objects when they become available.”

Davis traveled to Africa as often as three times a year, and claims to have lost count of his trips after the hundredth visit. Even so, he could not be there as much as he needed to be. Instead, he fronted money to a trusted handful of African associates who sought work year-round. When he was in Africa, he also learned to make quick aesthetic and financial decisions. “I did a lot of work when there was no way to reach anyone by phone or internet. When I saw something wonderful, I had to trust my eye. I couldn’t go home and research things for six months in scholarly journals and auction catalogues.”

African trips are largely a thing of the past for both Kent and Charles Davis. The hassle of travel has caught up with them and they rattle off a list of tropical diseases-malaria, dengue fever, and river blindness-that one or both have suffered over the years. “I miss Africa,” Charles Davis says. “For me, it’s the motherland. It’s home. My DNA applauds whenever I am there. That’s why I am so glad to have these African things around me. Each one of these pieces is a connection to who I am as a human being.”