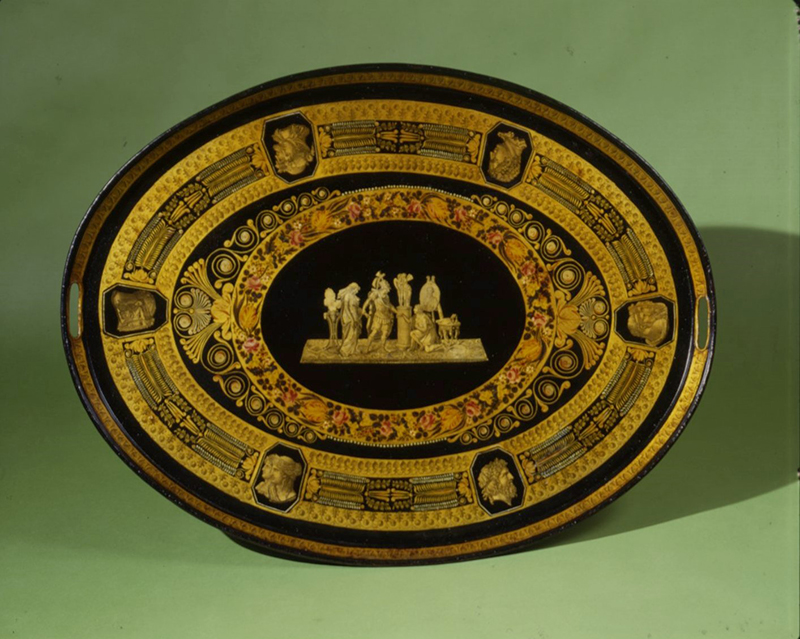 As exhibitors prepare for the Winter Show’s first-ever virtual event, we asked them to reflect on their past years at the fair or highlight one exceptional object available this January and describe it as they might to an interested collector. Here are their stories and the works of art they chose to share.

We mounted a Charles Burchfield and William Hunt Diederich exhibition at a TEFAF fair a few years back, where a dealer visited our booth with images of what he thought might be architectural works by Diederich. The images depicted his classic flat, iron, silhouette animal forms with dozens of whimsical birds and desert plants. Everything looked “right,” but we had never seen anything by the artist on this grand scale. Our research traced the provenance to a 1920s commission for a town house in New York, and when we visited the town house we were able to identify other examples of the artist’s work in its architecture. What we had was, indeed, by Diederich, and perhaps his largest work ever discovered. The fun part was to then reimagine the tableau for our booth at the Winter Show in 2019, a task that proved to be our most expansive installation to date. We designed a fifteen-foot scene of thirteen birds inhabiting a foliate landscape. The work took up an entire wall of our booth, but the result was stunning and stopped every visitor in their tracks. The entire tableau was sold immediately as the fair was opening.

At the age of fifty-seven, Henry Petzal retired in 1963 to pursue his second career—silversmithing. He studied at the Craft Students League in New York City and developed a hand-wrought style in sterling that was all his own. Working in Shrewsbury, New Jersey, and, after 1972, in Lenox, Massachusetts, he limited each of his designs to eight examples. Bold repoussé chasing of inspired by undersea life and the malachite handle make this covered bowl one of his most successful designs. A similar example of the design is in the Museum of Fine Arts, Boston. This one was a gift to Petzal’s son and descended in the family.

This nineteenth-century carved stone sundial, purchased at an estate auction in Tipperary, Ireland, in October 2019, is an example of the lengths we’ll go to procure pieces we love. At the time of pickup, we learned it was cemented into the ground. “You’ll need a mason,” said the auction house, casually. Quite miraculously, we found mason Philip Quinn, who, upon inspection, determined the job would cost a handsome sum. After much haggling, the auction house decided to do the noble thing and pay for removal. Sadly, that victory launched a battle with the new owner of the house, who objected to any digging on his lawn. It was February before it was out of the ground and safely stored at Mr. Quinn’s. But then, all shipping came to a halt due to COVID-19. Happily, it is now scheduled to arrive in New York in January 2021, just in time for the Winter Show.

This coffee pot is one of eight “after-dinner coffee pots” shown by Tiffany and Company at the World’s Columbian Exposition in Chicago in 1893. All feature extraordinary enamel work and unusual hard-stone mounts—lapis, labradorite, thulite, or, as on this example, jade. Unlike some of the others, here the enamel decoration survives in perfect condition, standing out beautifully from the oxidized surface of the metal.

For many years Hirschl & Adler Galleries showed only American paintings at the Winter Antiques Show. We typically sat around with only occasional activity, while those around us were selling furniture, silver, glass, and a wide variety of other decorative arts.

Thus, we were inspired to try our hand, and in 1987 we displayed three fine pieces of Victorian Renaissance revival furniture, an amazing Old Paris porcelain testuarta and coffee service, and a nearly matching English Regency tole tray. Within the first twenty minutes, the three pieces of furniture were sold to one buyer, and ten minutes later the porcelain set and the tray went to another.

And so was born an interest in decorative arts at Hirschl & Adler. Our presentations across mediums have now become a staple at the Winter Show.

Throughout its history, the venerable Winter Antiques Show faced endless near catastrophes, both natural and manmade. Transportation strikes, newspaper strikes, blizzards, and the 1968 garbage strike made the show challenging for commerce. My father, Zeke, was participating in the show during the 1960s and recalled these events.

The blizzard of 1966 crippled the Eastern Seaboard, and the massive snow it brought shut New York City down tight. The Winter Antiques Show management kept the dealers to the schedule, nonetheless, and they weren’t excused to brave the storm until the regular closing time. A group of dealers, all men, banded together in brotherhood, marched out to the deserted street, and amused themselves by writing their names in yellow on a snow-covered Park Avenue. How did they do it? Do you need to ask?

This simple anecdote illustrates the behind-the-scenes camaraderie of colleagues surviving January in New York. Funny how we remember the stories and experiences as much as the treasured objects we bring to the shows.

After the 2020 Winter Show concluded, my hunt began to find great treasures for 2021. I was very fortunate to rediscover this wonderful Ipswich, Massachusetts, high chest. I fell in love with the rich finish, large original brasses, and exceptionally elegant stance. While conducting my research, I found that the high chest had been published in the first volume of American Antiques From Israel Sack Collection in 1969. The Winter Show is always the event to pull out all of the stops, and this piece—after more than fifty years—will be on display in this year’s online event.

Originally owned by Elizabeth Hotsettter-Huber (1809–1891) of Lancaster County, Pennsylvania, this crooked-neck coffee pot with original painted decoration attributed to the Filley tin shop of Philadelphia, circa 1825–1850, is considered the finest known example of its kind. A personal favorite, we have enthusiastically bought and sold this masterpiece on three separate occasions over the past two decades, its star-studded provenance including some of the most discriminating private collectors of a generation.

We often have objects of exceptional quality and importance that we hold exclusively for the Winter Show. Every once in a while the sale of these objects delivers them to exactly where they should be. In 2019 we offered a rare and historically important engraved map powder horn, the best known of a group produced for British soldiers stationed in Charleston, South Carolina, during the French and Indian War. The circa 1761 horn records the pertinent places of the British and Cherokee encounters and features a striking view of the city of Charleston. After seeing our ad in The Magazine Antiques, a very generous donor arrived at our booth within minutes of the show’s opening, accompanied by the curator of Historic Charleston. Rarely has a sale been more satisfactory: this extraordinary object is now available for all to enjoy in Charleston.

This finely worked folk art yarn-sewn rug features an exuberant floral design bursting with color, pattern, texture, and hidden meaning. The language of flowers, or floriography, was used by countless cultures, including the ancient Egyptians, Hindus, Greeks, Romans, and more. The conceptual meaning of flowers was popularized in America by the writings of the French- Americani naturalist Constantine Samuel Rafinesque, whose popular weekly column, “The School of Flora,” was published in the Saturday Evening Post from 1827 to 1828. The design of this yarn sewn rug features three large flowers, possibly carnations or tea roses. A red carnation carried the meaning of admiration and a red rose remains the symbol of love to this day. The boldly formed central flowers are surrounded by branches containing rosebuds, violets, tulips, pansies and others. It is a unique message meant to express affection, joy, and hope. The materials and construction of the rug support an origin in New England and a date between 1820 and 1850. The technique of yarn-sewn rugs comes out of the bed rugg tradition that was popular in eastern Connecticut and the Upper Connecticut River Valley beginning in the mid-eighteenth century. Long strands of colorful yarn were pulled through a woven ground, resulting in a richly textured surface.

I have so many memories of the Winter Show, but the one that comes to mind first is about a very large gold bracelet we had many years ago. The piece was Etruscan revival, made by Carlo Giuliano circa 1875. It had large rectangular plaques with stepped sections surrounded by beading. We were excited to present it at the show and it was well received. While showing the bracelet to a client, I accidentally hit it on the edge of the counter and one of the plaques popped open to reveal a hidden locket. We had not been aware of its existence and proceeded to find that all eleven panels opened. The client was so delighted that she could not resist the purchase. This year we present a beautiful Victorian gold and micro-mosaic bangle bracelet made circa 1875. Perhaps it hides a secret!

A fter seventy-five-plus years in business we always enjoy the chance to reconnect with old friends and clients. At the Winter Show in 2018, our first year participating in the fair, we had a particularly special encounter. Just around the corner from our stand, as part of the loan exhibition from the Virginia Museum of Fine Arts, stood the rare and extraordinary Tiffany Cobweb lamp designed by Clara Driscoll, given to the museum by Sydney and Frances Lewis in 1985. We were thrilled to see this “old friend” again—the Lewises had acquired it from Lillian Nassau in the early 1970s.

Descended in the Tate-Welch families of Boston, this desk-and-bookcase is part of a group of pieces made in Boston in the first half of the eighteenth century. They include a cupboard-on-chest at Yale, illustrated in Gerald W. R. Ward’s American Case Furniture in the Mabel Brady Garvan and Other Collections at Yale University; a privately owned secretary pictured in the first volume of American Furniture; the Edmund Jackson secretary once owned by Mr. and Mrs. Adolph Henry Meyer; and at least six other block-front pieces owned privately.

The desk-and-bookcase has a special memory attached to it. My grandfather, Bernard Levy, and I went to see it at the home of a descendant of the original owner who lived in North Carolina. After agreeing on price the seller insisted on us sampling his homemade moonshine. As neither of us were drinkers, the alcohol had quite a punch. Fortunately, we had a ride to the airport and a Delta Airlines pilot to fly us home.