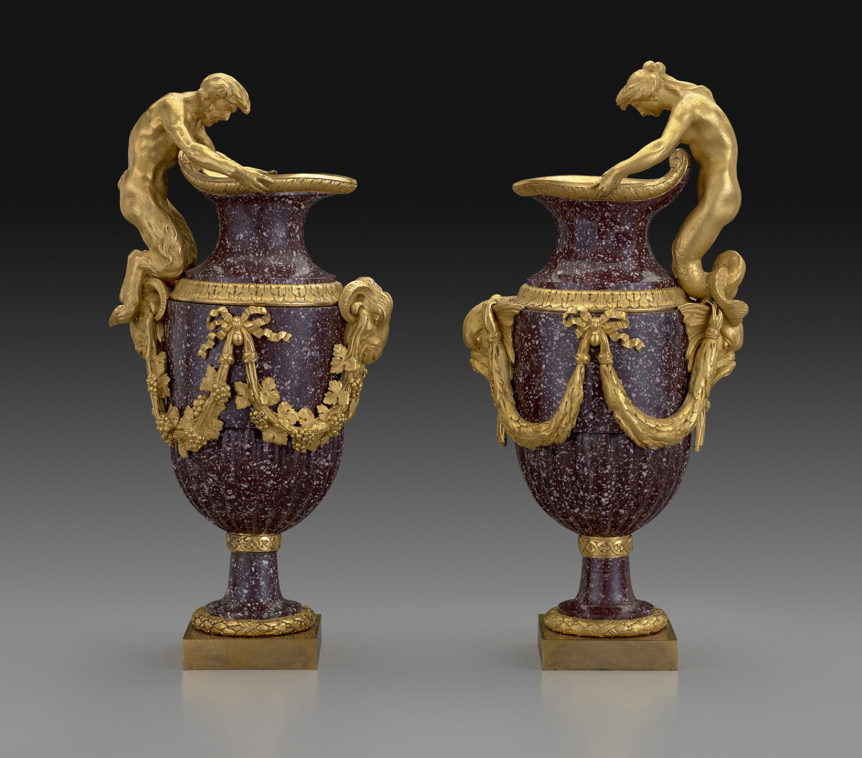 Industrialist Henry Clay Frick achieved national celebrity as a collector of important old master and nineteenth-century paintings, which he housed in his lavish Fifth Avenue mansion in Manhattan. And many visitors identify the Frick Collection with its Rembrandts and Turners, not recalling—or perhaps not realizing—that Frick had also made notable collections of bronzes, marbles, enamels, furniture, and other choice works of sculpture and decorative art. While continuing to spotlight its paintings, Frick director Ian Wardropper has placed an invigorating emphasis on those other distinguished elements of the Frick Collection, overseeing with his curators important shows that have highlighted works in bronze by the early nineteenth-century French sculptor David d’Angers, tapestries inspired by Charles-Antoine Coypel’s Don Quixote paintings, and a current iconoclastic Meissen porcelain show, combining rare eighteenth-century examples with others produced recently. This month the Frick opens Pierre Gouthière: Virtuoso Gilder at the French Court, the first show devoted to the work in gilded metal—traditionally called bronze d’oré in French—by an artist whose achievements placed him among the finest French masters of the eighteenth century.

Organized by Charlotte Vignon, the Frick’s curator of decorative arts, the intimate and exquisite show features twenty-one luxurious objects, most of them being exhibited in New York for the first time. The dazzling accompanying book, by Vignon and former chief curator at the Musée de Versailles Christian Baulez, is the first English monograph on Gouthière, and includes the first catalogue raisonné of his work compiled since 1912 and a trove of new art historical and technical research by leading scholars in the field relating to those works that can now be attributed with certainty to this extraordinary artist.

Gouthière produced ornamental mounts for furniture, porcelain, fireplaces and related architectural elements, as well as clocks, candelabra, sconces, and other stand-alone pieces. Every work, regardless of its size or purpose, bespeaks the refined craftsmanship, technical complexity, and vivid naturalism that gained him an immense reputation in pre-Revolutionary France. At that time, connoisseurs held the decorative arts in profound esteem, often placing them on an equal plane with the fine arts. Vignon notes that “in the last 100 years, as the balance of esteem shifted away from the ‘minor’ arts, Gouthière was forgotten by art historians and his work was overshadowed by that of painters and sculptors like Fragonard and Clodion.”

Though Gouthière based his works on original designs by important neoclassical architects and sculptors, Vignon explains that his genius lay in his interpretative brilliance, his singular gifts as a modeler, and his unparalleled mastery of chasing, gilding, and varied surface textures. He “could be an inspiration for artists and designers today,” she says.

Gouthière rarely signed his pieces, and what we know of his life and oeuvre is clouded by unknowns. He was baptized on January 19, 1732, but his actual birthdate is unrecorded. One of eleven children of a master saddler, the young Pierre is thought to have begun his metalwork training in Troyes, undertaking the bulk of it during the 1750s in the Paris workshop of the gilder François Ceriset. Gouthière took over the business on Ceriset’s death in 1756, and his widow became Gouthière’s wife.

His rapid ascent to preeminence in his field was aided by the work that he undertook during the 1760s for François-Thomas Germain, sculpteur-orfèvre du roi (sculptor-goldsmith to the king). Most probably from Germain, Gouthière learned the subtle arts of chasing—hand-tooling or hammering patterns in metal to create a design—and gilding—the application of layers of gold onto lesser metals. Gouthière’s craftsmanship is all the more impressive because, rather than malleable silver, he wrought his pieces in brass—a harder, copper-zinc alloy that is far more difficult to work. In eighteenth-century France, the misnomer “bronze” was applied to this medium, though true bronze is a copper-tin alloy.

In 1767 he entered the service of the French court upon his engagement by the Menus-Plaisirs du Roi, a department of the royal household that organized court entertainments and also provided the king’s personal effects. Soon Gouthière’s clientele included important members of the courts of Louis XV and his doomed grandson Louis XVI, not the least of whom was the Comtesse Du Barry, Louis XV’s notorious mistress.

Embracing the prevailing neoclassical style of his day, Gouthière fashioned elaborate decorative compositions featuring human and animal motifs, masks, paws, floral, leaf, and intertwining vine forms. Their creation involved an exceedingly complex, laborintensive artistic process of which Gouthière’s mastery was virtually unparalleled at the time. Working as a sculptor in miniature, he would initially model every element in wax or wood, from which a plaster casting was made, and from that a more durable pewter or brass foundry model. From this the hollow sand mold was formed, and into it the molten “bronze” was poured to create the final piece. Once cooled, the rough cast was finished and enriched by chasing and piercing—techniques employing a small hammer together with a battery of specialized files and chisels (ciselets)—ultimately attaining a level of naturalism and intricacy previously unseen in France.

One reason for the exceptional quality of Gouthière’s work was that, while in most workshops the master divided the labor among large teams of assistants and apprentices, his workshop was smaller, allowing him greater personal supervision of his productions. In Gouthière’s hands, the neoclassical human masks, ram’s heads, and other zoological motifs are not just stiffly idealized, they are lively—eyes seem to gaze attentively in a specific direction, mouths are expressive. The kneeling dromedaries on a 1777 pair of firedogs made for Marie Antoinette seem positively disdainful as they turn their heads away from the viewer (Fig. 2). Flowers and leaves seem to curl and flutter like those in nature thanks to Gouthière’s method of undercutting and faceting the surfaces behind the edge of each leaf and petal to impart a delicate sense of botanical lightness to the cast metal.

After chasing and piercing came gilding, a multistep process. Briefly summarized, each mount or element of a mount was first pickled with acid to cleanse and roughen the surface, then painted with a paste of powdered or leaf gold and mercury. After several applications of the gold amalgam, a last firing evaporated the mercury, leaving the fused surface of gold. Normally gilding was buffed to a high polish, but Gouthière perfected a matte technique that, while more expensive because it required more gold than burnished work, produced a rich, soft luster. He combined bright and matte gilding on a single piece, endowing the surfaces with a sensuous depth and variety of finish.

Commanding high fees during the 1770s and 1780s, Gouthière enjoyed a sumptuous lifestyle. However, his artistic genius was not complemented by business acumen. His aristocratic clientele took their time to pay his bills, if they paid them at all—two of his most exalted clients, the duc d’Aumont and the duchesse Mazarin, died without paying the enormous sums they owed him. As early as the 1770s he was financially overextended, and in 1787 he was obliged to declare bankruptcy. Thereafter, although he continued to work almost to his death, his fullblown career was effectively over, and he died impoverished. Ironically, Gouthière’s posthumous reputation quickly soared among French and British collectors, resulting in copies of his work and numerous misattributions to him throughout the nineteenth and twentieth centuries. The present exhibition features only examples whose authenticity can be proven by the latest scholarship.

The Frick has several ties to Gouthière’s work. The exhibition was inspired by a marble side table in the museum’s collection, regarded as Gouthière’s supreme masterpiece (Figs.1-1b). Adorned with his neoclassical gilt-bronze mounts, this sumptuous example of decorative art—one of the few eighteenth-century pieces of furniture made entirely of hard stone—was produced in 1781 for the duchess of Mazarin’s Paris hôtel particulier. It represents the collaboration between Gouthière and two important architects of the time—François-Joseph Bélanger, chief architect to Louis XVI’s brother, the comte d’Artois, and Jean-François-Thérèse Chalgrin, subsequently the designer of the Arc de Triomphe. The rare gray-blue North African marble—picturesquely called bleu turquin in France—was supplied and carved by the royal sculptor and marble cutter Jacques Adan. Gouthière’s gilt mounts include superb Ionic capitals for each leg, the Greco-Roman volutes enriched with wonderfully detailed festoons of fruits and flowers. The central mask on the apron of the table is no mere cliché: the quizzical face with its sidelong gaze is framed by an impressive chased coiffure of waves, braids, and sausage curls entwined with a string of pearls.

The history of the Frick’s second Gouthière connection includes some extraordinary coincidences: Jean-Honoré Fragonard originally painted the Frick’s celebrated panels depicting The Progress of Love for the same room in Madame du Barry’s Château de Louveciennes for which Gouthière created multiple sets of gilt-bronze ornaments and pairs of firedogs for the fireplaces as well as doorknobs and window handles of magnificent workmanship. The exhibition reunites the Fragonards (see Fig. 7) with a pair of Gouthière’s firedogs and one of his exceptional window knobs (Figs. 8a, 8b). It is worth noting that while Fragonard hoped to receive 20,000 livres for his Progress of Love, Gouthière’s position in Bourbon France’s artistic firmament was such that he received nearly as much—16,000 livres. So memorable were Gouthière’s bronze decorations for du Barry’s château that years later, the painter Elisabeth Louise Vigée Le Brun recalled them in her Souvenirs, remarking that even “the locks could be admired as masterpieces of the goldsmith’s art.”

Charlotte Vignon observes that “while the general public usually associates virtuosity with music and dance, Gouthière was also a virtuoso in that he not only mastered the difficult techniques of chasing and gilding brass, but he went beyond the difficulty of the medium, surpassing his contemporaries by creating objects that transcend technical perfection—they are aesthetically perfect as works of art.”

Pierre Gouthière: Virtuoso Gilder at the French Court is on view to February 19, 2017.