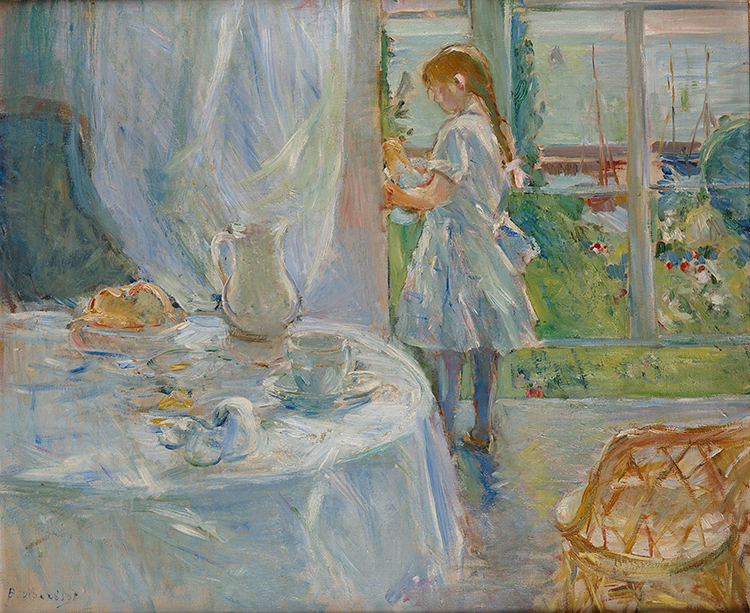 An exhibition in 1876 at Paul Durand-Ruel’s gallery in Paris drew ridicule from art critic Albert Wolff, who warned readers of Le Figaro: “Here five or six lunatics, one of whom is a woman . . . have gotten together to work. These self-styled artists call themselves ‘Impressionists.’ ” This group of radicals shaking up the status quo and daring to reject the Salon de Paris included such notables as Claude Monet, Edgar Degas, and Pierre-Auguste Renoir. Lesser known, though equally significant, in this coterie is the single woman mentioned: Berthe Morisot.

A prominent figure in the Parisian avant-garde, Morisot devised and experimented with new techniques, rendered and elevated modern-day life with an expressive hand, and was instrumental in subverting the traditions of the Académie des Beaux-Arts—and yet she is often left out, or marginalized, in the canon of nineteenth-century art history. However, a new exhibition, the first of its kind in the US in more than thirty years, is righting this wrong, and shining a spotlight on Morisot’s contributions. With one of the most substantial collections of impressionist paintings (including the largest holdings of paintings by her comrades Cézanne and Renoir), the Barnes Foundation in Philadelphia is an apt setting for the Morisot show, and the roughly seventy works on view there place her squarely in the narrative of modern art.

Loosely organized in a chronological manner, the exhibition focuses on her figure paintings and portraits, with close attention to the development of her distinctive style and subject matter. Whether by circumstance or choice, Morisot painted the female form often and with nuance, showing women in many contexts and roles: private and public, domestic and leisure, mundane and remarkable. Barred from the nightclubs and brothels that served as fodder for her fellow impressionists, she looked to other sources for her compositions. And the woman in many ways became her muse. She captured women reading books and playing music; tending to their children and hanging laundry; sitting on the beach and dressed for an evening ball. Her light, unrestrained brushstrokes and vivid use of color reveal their complex interior worlds. Among Morisot’s preferred settings in which to paint her subjects were transitional spaces—windows and doorways—where her mastery of light and shadow is seen at its best, framing the subject. This interest in the in-between, what lies on either side or just past the threshold, perhaps speaks to Morisot’s own interstitial place in the artistic zeitgeist of her time, as both a woman and a painter.