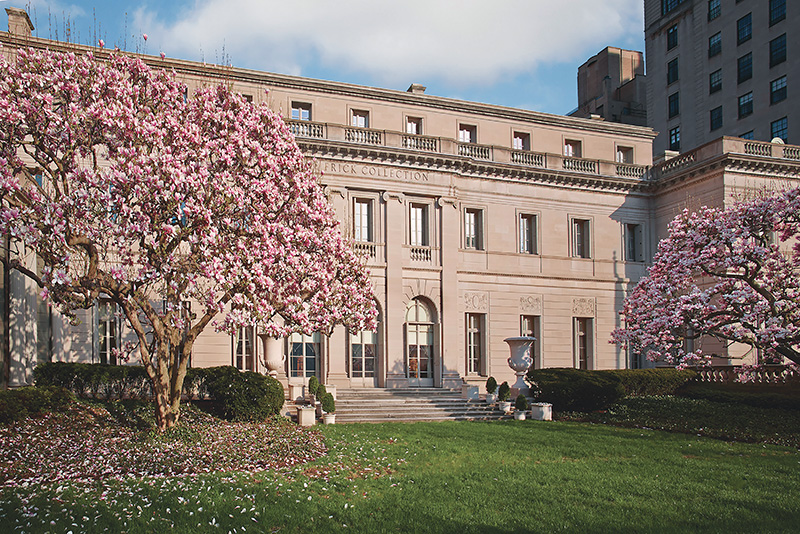 In all of culture there may be no greater incongruity than the Frick Collection’s move from its mansion on Fifth Avenue and Seventieth Street (Fig. 1) to Marcel Breuer’s brutalist pile on Madison Avenue and Seventy-Fifth, formerly the home of the Whitney Museum of American Art (Fig. 2). For the next two years, during the expansion of its century-old hôtel particulier, the Frick will exchange an American industrialist’s dream of European high culture for a European aesthete’s dream of American functionalism.

One of the famous facts about the Frick Collection—now temporarily renamed the Frick Madison—is that none of the art acquired during the lifetime of Henry Clay Frick (1849–1919) is generally not loaned to other institutions (unlike works acquired after his death, which have been lent on occasion since his home became a museum in 1935). For that reason, this latest move is likely to be the only occasion when we will ever see these masterpieces other than on the walls of his Fifth Avenue mansion.

Although the gray postwar austerities of Breuer’s brutalist manifesto do not reveal Frick’s collection to best advantage, this recontextualizing of the works does shed some light on the collection itself, and perhaps even on art in general. For the difference between art (certainly good art) and decoration is the difference between something that is sovereign and autonomous in itself and something that is content to dissolve itself, to lose itself, in a larger context. Any work of art that is worth its salt (not counting site-specific works) will ultimately burn itself out of any context in which we place it, demanding that we engage with it entirely on its own terms. Even the antique frame that surrounds an Old Master painting—no matter how fine that frame might be—will dematerialize before our very eyes the more we study the work itself.

In this sense, Rembrandt’s late self-portrait and Giovanni Bellini’s depiction of Saint Francis (Fig. 3)—two of the stars of the Frick—triumphantly hold their own against Breuer’s minimalist tendencies. The paintings in Fragonard’s Louveciennes cycle rise up like exiled aristocrats, but even they, even here, beguile the committed viewer with their grace. And so it goes with the Vermeers and El Grecos, the Hobbemas and Holbeins, the ceramics and the bronzes. To see the Frick Collection in the former Whitney Museum is to be reminded of Richard Avedon’s mid-century images for Harper’s Bazaar in which some peerless beauty, dressed to the nines, stands beside a length of burlap or a hirsute pachyderm. Only four paintings are positively enhanced in the process: Whistler’s gold-framed, monochromatic portraits of Rosa Corder and the Comte de Montesquiou (black on black) and of Frances Leyland and Lady Meux (gray on gray) (Figs. 4, 5).

Perhaps the greatest lesson of this encounter with the Breuer building is that, despite the sovereign autonomy of the Frick’s masterpieces, so much of the pleasure that we find in visiting them depends on seeing them in the context of Henry Clay Frick’s former home. As we do so, we are really seeing two things at the same time: the individual masterpiece and that larger, composite masterpiece that emerges from the totality of the art interacting with the totality of its architectural environment. A man of steely resolve and tyrannous self-control, Frick sought opulence within a context of unrelenting restraint: dark wood and grayish green velvet dominate the interiors of his mansion, decorated by Elsie de Wolfe and by Charles Allom, who had just come from remodeling Buckingham Palace and was then at the height of his fame. The same austere opulence defines the interior and exterior architecture of the eighteenth-century French hôtel particulier that Carrère and Hastings designed for Frick in 1912, and that John Russell Pope ably expanded in 1935. By comparison, the largely contemporary Morgan Library seems almost gaudy.

The art itself, assembled with the help of Bernard Berenson and Joseph Duveen, likewise reflected Frick’s character: despite a taste for Dutch art of the seventeenth century and British and French art of the eighteenth, even his forays into the Counter-Reformation works of Titian, Veronese, and El Greco—he would have nothing to do with the Italian baroque—exhibit an almost Episcopalian restraint: it is rare indeed to find a bold gesture or a bright color amid the demure masterworks of the Frick Collection.

The Frick’s two-year residence in the Whitney’s former home presents us with a fine occasion to consider this institution and what it represents. Doubtless we will be hearing a great deal about how the museum is broadening its outreach to a new and more diverse generation. There is nothing wrong with that goal, but the fact remains that one would be hard put to imagine a cultural enterprise more retrograde to the present moment than the Frick Collection. It embodies an American tycoon’s unwavering devotion to an almost mythic European past, an unquestioning acceptance of nineteenthcentury France as the ultimate arbiter of cultural value. Everything about the museum, from its fixation on dead white men of genius to its celebration of a specifically plutocratic, Episcopalian notion of greatness, stands at loggerheads with the egalitarian convictions of the present moment, convictions that are largely enshrined in Breuer’s building, despite its being more than half a century old.

At a time when the data file made by a pseudonymous digital artist can sell at Sotheby’s for $60 million, when interest in the Old Masters is flat, when few people under sixty who can afford such things evince the slightest interest in those rare books and furnishings that were once the hallmarks of the best taste, it is not unwise to question the role of this inveterate institution in the cultural life of our country. Certainly the Frick should reach out to all and sundry. But its ambition should not be to change with the times, since it really cannot do so without ceasing to be itself, without ceasing to be an institution loved precisely for being what it is and as it is. The Frick must assimilate the public to itself rather than itself to the public. Some will assert, in opposition to this idea, that our world is no longer the world enshrined in the hushed halls of Frick’s mansion. And yet, the architectural and cultural context in which Henry Clay Frick chose to live was not really his world either: what, after all, were Titian and Fragonard, ionic colonnades and portes cocheres, to this son of rural Pennsylvania who never graduated from college? Especially in this pluralistic age in which we live, our culture is apt to be not the one that we were born into or that the age has thrust upon us, but rather the one that we have chosen, even invented, for ourselves. And so it goes with Mr. Frick and his incomparable home. In that indissoluble union of its art and its architectural context, the Frick Collection is a work of fiction, but of great fiction, so great that, in the end, it becomes a great truth.