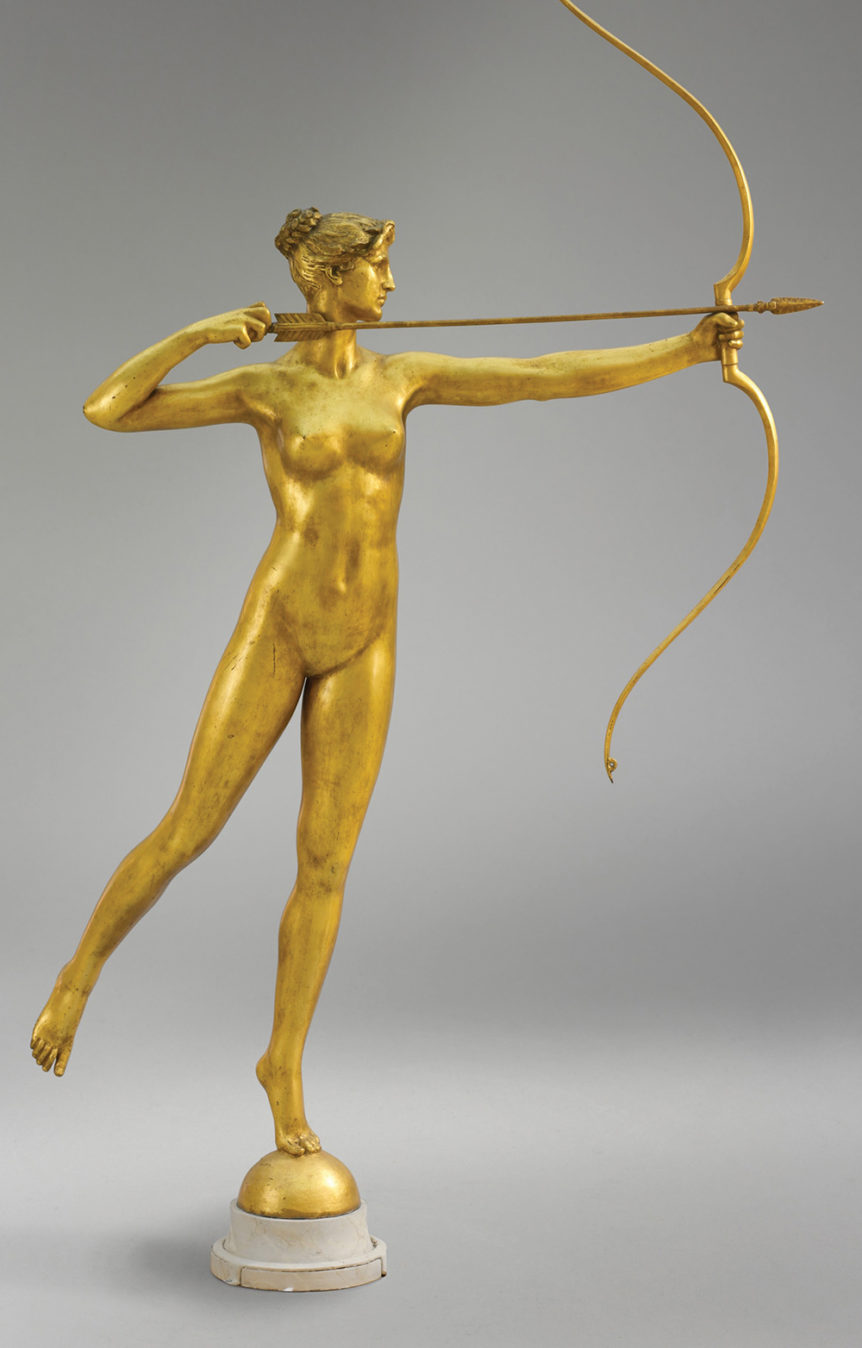 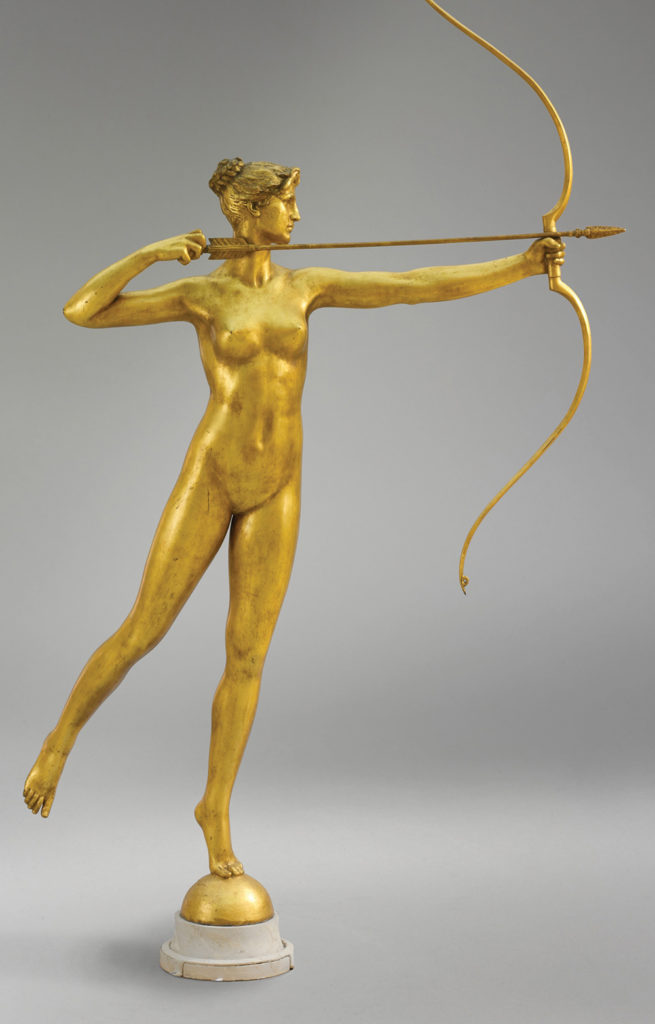 His artistic career included iconic sculptural monuments to the Civil War—the Standing Lincoln in Chicago, the monument to Admiral David Farragut in New York City, the Shaw Memorial in Boston, and the gilded equestrian statue of William Tecumseh Sherman that guards a corner of Central Park. He pushed the limits of low-relief portraiture, designing coins and cameos of exquisite beauty. He was an organizer of exhibitions, a city planner, a founder of the American Academy in Rome, and a member of what was known as the “art cabinet” of President Theodore Roosevelt. 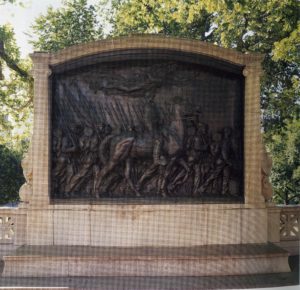 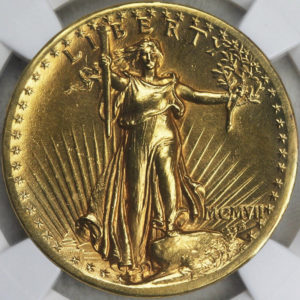 Fig. 3. Obverse of a Saint-Gaudens-designed twenty-dollar coin, designed in 1907 and produced by the United States Mint 1907–1933. Gold and copper, diameter 1 ⅜ inches.

The Gilded Age sculptor Augustus Saint-Gaudens forged a career of international scope, achieving a degree of fame unprecedented for an American artist to that time. His life and artistic legacy are the subject of a new exhibition at the Currier Museum of Art in Manchester, New Hampshire, the first survey of the artist’s work in New England in more than thirty years. 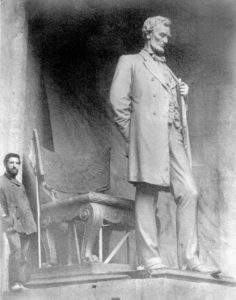 Fig. 5. Saint-Gaudens and the clay model for Abraham Lincoln: The Man in a photograph by DeWitt Clinton Ward, c. 1885–1886. Courtesy of the Saint-Gaudens National Historic Site, Cornish, New Hampshire.

Born in Dublin, Ireland, of a French father and an Irish mother, Saint-Gaudens was raised in New York City, where his family settled after immigrating in the year of his birth. His father, Bernard, was a designer and maker of fine ladies’ shoes. Mary McGuiness, his mother, came from a family of plaster workers; she had met her husband in Dublin, where they both worked in a shoemaking shop. Like many sons of immigrants in the teeming city, young Augustus began work early to help support his family. His artistic talent was recognized while he was a child, when he was apprenticed to a cameo cutter. So adept was he that his first boss, Louis Avet, fired the boy in a fit of jealousy, only to plead for his return. Showing spirit, Augustus refused, moving instead to the shop of Jules Le Brethon. Encouraged to study art, Augustus took evening classes at the Cooper Union and the National Academy of Design, which was conveniently located next door to his father’s shoe store.

In 1867 Saint-Gaudens’s parents sent him to France to pursue further training. Paris, at the lavish zenith of the Second Empire, was establishing itself as the center of the art world. Saint-Gaudens took preparatory classes while he waited through the long entrance process of the prestigious École des Beaux-Arts. Helped by some lobbying from ambassador Elihu Washburne, he was admitted to the school in 1868. Saint-Gaudens survived the raucous life of the studio because he spoke French, although his provincial accent (picked up from his father, who was a Gascon from the Pyrenees) led to his closest friendships being with boys from southerly regions, including the Toulouse-born sculptor and painter Antonin Mercié and the Portuguese sculptor António Soares dos Reis. 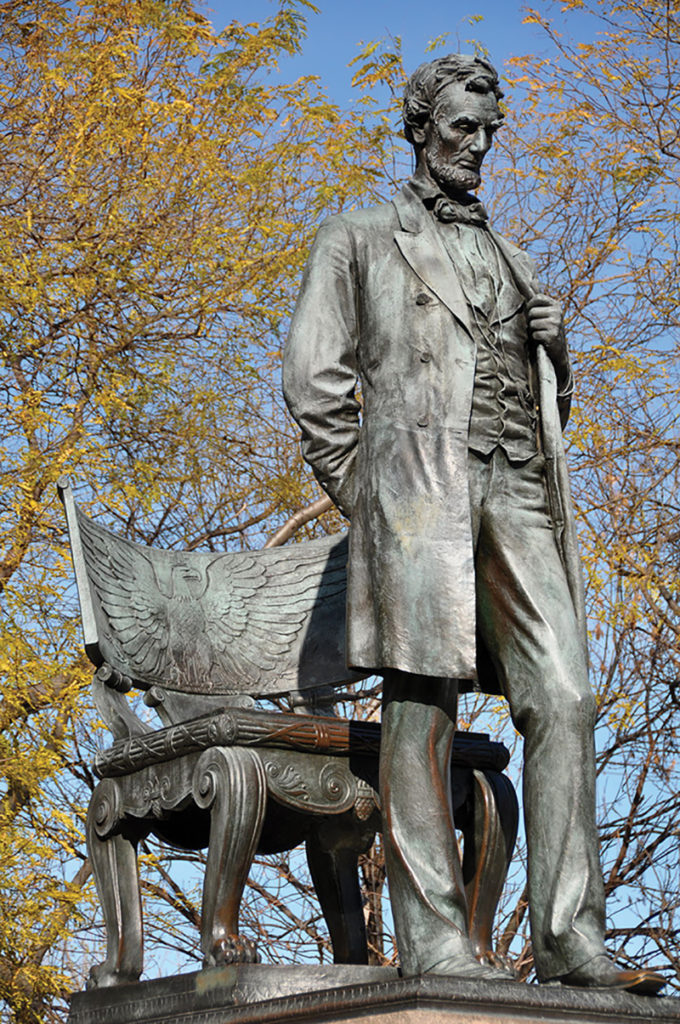 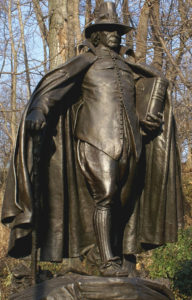 The events of 1870, as the empire was thrown into upheaval by Napoleon III’s rash entry into war with Prussia, prompted Saint-Gaudens to move to Rome, where his eyes were opened to the order and beauty of classical and Renaissance art. It was there as well that, in late 1873, he met his wife-to-be: a young Boston art student named Augusta Homer (a distant relation of Winslow Homer).

The two became engaged in 1874, but delayed marriage until Saint-Gaudens could establish his career. That was accomplished when he won the 1876 commission to sculpt the monument to the Union navy hero David Glasgow Farragut, located in New York’s Madison Square Park (Fig. 11).

The simplicity and naturalism of the bronze statue, showing the admiral standing steadfast, the edge of his coat blown back by a stiff wind, belies the significance of the monument in American art. The basis for the seaman’s pose was the statue of Saint George carved by Donatello for Orsanmichele in Florence, which Saint-Gaudens had visited. The Farragut statue stands atop a base—originally of bluestone, but later replaced with a copy in more durable granite—that forms a semi-circular bench, or exedra, which was designed by Saint-Gaudens and his new friend, architect Stanford White. The lyrical carvings on the base, of flowing waves, dolphins, and women representing loyalty and courage, almost seem to presage the art nouveau style. The skillful uniting of two types of artistic creation—carved and cast—and bringing both classicism and modernity into a single work was unprecedented in New York. The piece made Saint-Gaudens’s name. 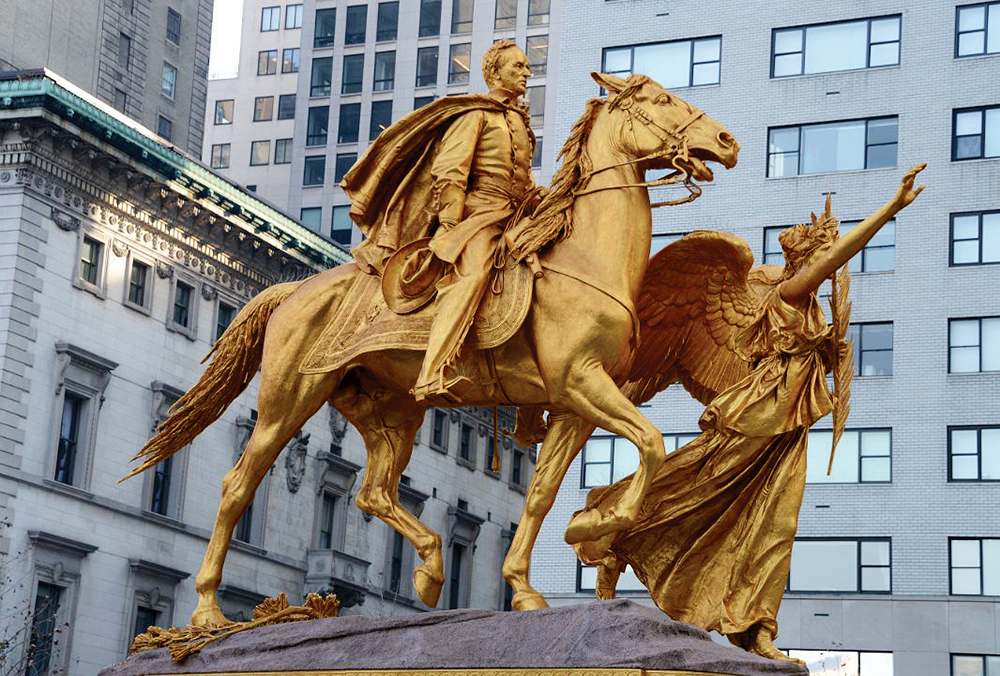 The 1880s saw the start of a rush of commissions for what would become renowned sculptures. Each was unique, each displayed the mix of complexity and simplicity that was a hallmark of Saint- Gaudens’s style. Commissions for monuments to Abraham Lincoln, Generals Logan and Sherman, and Colonel Robert Gould Shaw and his troops came quickly. While the artist took his time with every piece—fourteen years for the Shaw, for instance—all retained a sense of spontaneity and simplicity not seen in contemporary art in Europe. Eschewing melodrama and ornamentation, Saint-Gaudens brought an American clarity of vision to his work. Known for capturing the essence of his subjects, Saint-Gaudens did detailed research for each sculpture, but never let his work become overwrought. 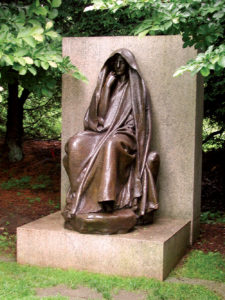 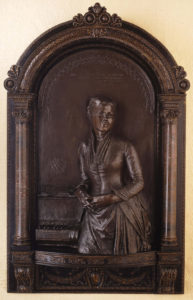 His homage to the sixteenth president, titled Abraham Lincoln: The Man but familiarly called the Standing Lincoln, offers an example (Fig. 4). It was later described by the president’s son Robert as the best portrait of his father. Saint-Gaudens examined Leonard Volk’s life mask of Lincoln and casts of the president’s hands as models for his portrait. The pose came from precise observation and inherent understanding of what was in the president’s mind. The stance, with head slightly tilted down, left hand on the lapel and foot forward, came from the classic pose of a Roman senator addressing the crowd in the Forum. Subtle in message, Lincoln used this position to link himself to the classical Republic. He usually tilted his head to bring his gaze directly to that of his audience, eliminating the awkwardness of his great height.

At about the same time, Saint-Gaudens completed monuments to early history with The Puritan and, later, The Pilgrim (Fig. 6), in Springfield, Massachusetts, and Philadelphia, respectively. Here, the solid, resolute character of the man represents the strength of faith in early English settlers in New England. The billowing cape gives movement to a figure that would otherwise appear heavy. While working on these commissions Saint-Gaudens also made his only female nude, Diana, destined for the tower of the Madison Square Garden designed by Stanford White (Figs. 1,14). Again, classical mythology meets American directness in the work, which spoke to the city’s burgeoning development and to modern progress by being the first sculpture lit by electricity in New York. 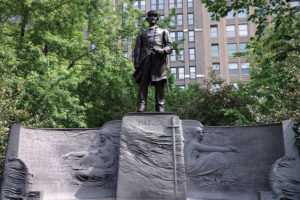 Fig. 10. William Maxwell Evarts by Augustus Saint-Gaudens, 1887. Inscribed “WILLIAM• MAXWELL• EVARTS•” at the top, “•M/D• C•C•C•LXXX/VIII” behind the neck, and “MODELLED FOR HIS DAVGHTER/ HELEN MINERVA/ BY AVGVSTVS SAINT-GAVDENS” below the bustline. Bronze, 22 ¾ by 10 inches. US Department of the Interior, National Park Service, Saint-Gaudens National Historic Site, gift of the Evarts and McLane Families, 2017.

As busy as he was, the one project that grabbed the artist’s imagination and heart more than any other was the Memorial to Robert Gould Shaw and the Massachusetts 54th Regiment (Fig. 2). The Fifty-fourth, the first African-American regiment in the Union Army, was an experiment that proved itself in the devotion and dedication of its troops and their colonel. They met their destiny in the assault on a small but significant fort on a barrier island off the coast of Charleston, South Carolina, in 1863. One quarter of the regiment and Shaw himself lost their lives in a hopeless charge against a well-entrenched fortification. The story became for Saint- Gaudens a journey of discovery into himself and modern history. Often referred to as a “symphony in bronze,” the Shaw Memorial, dedicated on Memorial Day, 1897, in Boston, remains even now an ideal of empathetic artistry.

For technical achievement, Saint-Gaudens shines in his development of low-relief, or “bas-relief,” sculpture. He perfected the technique of carving away from a flat surface to create a sculpted image that projects out from the background. Very few artists now can achieve the variety and naturalism of his low-relief portraits, which seem to combine the arts of painting and sculpture. Saint-Gaudens first saw this form of art in Europe. He was staggered by Renaissance medals in Italy, and brought the skill that made him a master at cameos to a larger scale with his innovative approach to this style. 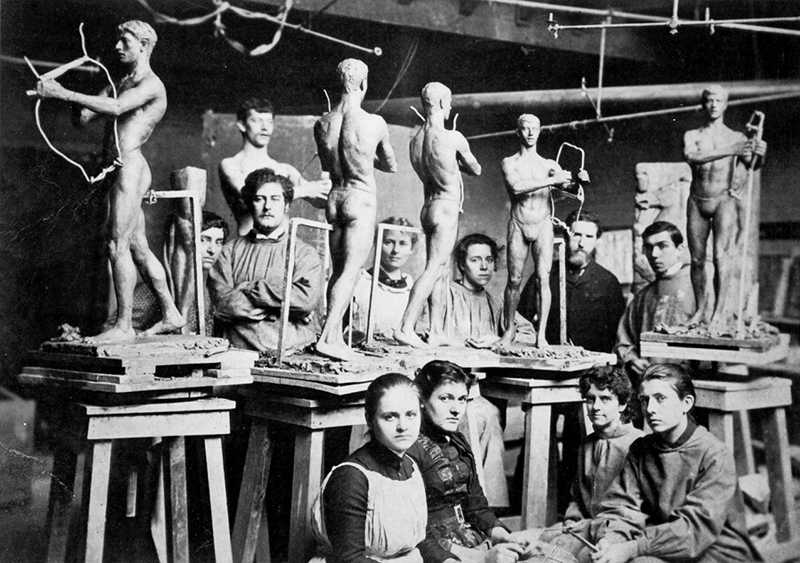 Fig. 12. Saint-Gaudens with his class at the Art Students’ League of New York, 1888. Courtesy of Saint-Gaudens National Historic Site.

The Saint-Gaudens National Historic Site in Cornish, New Hampshire, has two new examples of this work on view. The portrait of one of his first important patrons, Senator William Maxwell Evarts (Fig. 10), is a recent acquisition, a gift of the Evarts and McLane families. Carved in profile, the image shows the force of character that made Evarts an effective statesman. The way in which the forms seem to fade into the background make us believe that he is before us. A unique deep relief is seen in the memorial to Louise Miller Howland depictions of the Madonna and Child, the relaxed informality of the pose heightens the sense of the subject’s grace and warmth. The memorial speaks to the love and grief at the passing of a mother and wife beloved by the family and those—like Saint-Gaudens—who had known her in life. 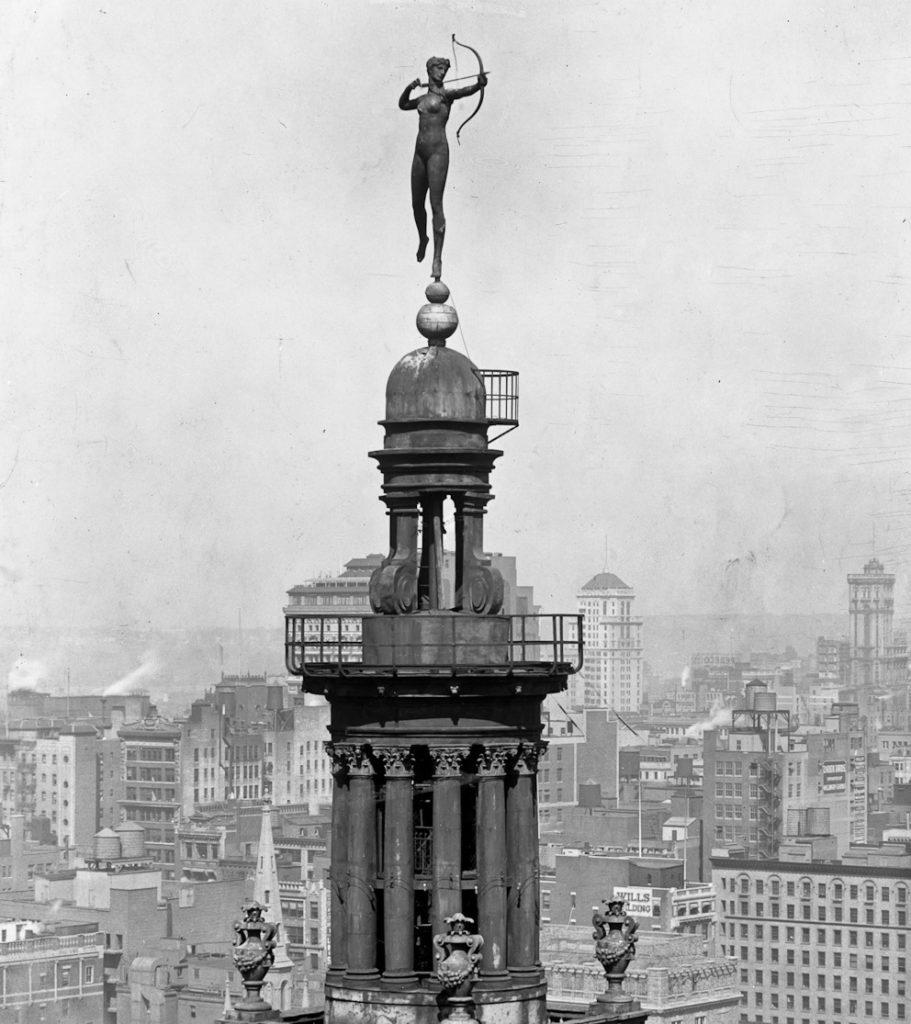 At the end of his career Saint-Gaudens took on the design of American coinage. The commission came from President Theodore Roosevelt, who saw a new vision for America as a strong magisterial state that would take a dominant role in the community of nations. A coin may seem insignificant, but Roosevelt understood the power of small symbols to raise the country’s self-image. Saint-Gaudens was the first private artist to design circulating American coinage, and he and the president looked to the classical age as their model. The design of the twenty-dollar gold coin, with its striding figure of Liberty, was unprecedented in American numismatics. The Indian head ten-dollar gold coin combined American and European design by adding a Native American headdress to a classical profile. 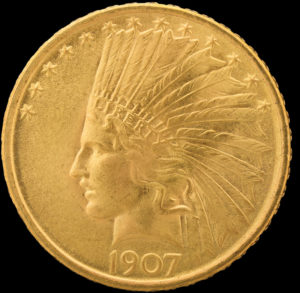 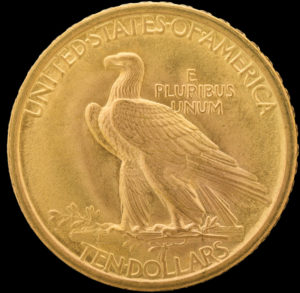 Saint-Gaudens did not live to see the coins enter circulation. At his death in 1907, the sculptor was honored with a funeral in Washington, DC, attended by the president, members of Congress, and a host of diplomats that included ambassadors from countries as diverse as France, England, Brazil, and Japan. In 1919 the artist’s widow established the Saint-Gaudens Memorial as a private foundation to preserve his legacy. It still serves an important role as partner to the Saint-Gaudens National Historic Site, which has managed the home and studio of the artist in Cornish since 1965. New Hampshire’s only national park, the property celebrates the life and work of Saint-Gaudens, and contains the world’s largest collection of his work. There and at the Currier, visitors can immerse themselves in the achievements of an extraordinary
American artist.

The Sculpture of Augustus Saint-Gaudens is on view at the Currier Museum of Art in Manchester, New Hampshire, from February 10 through May 20, 2018. currier.org