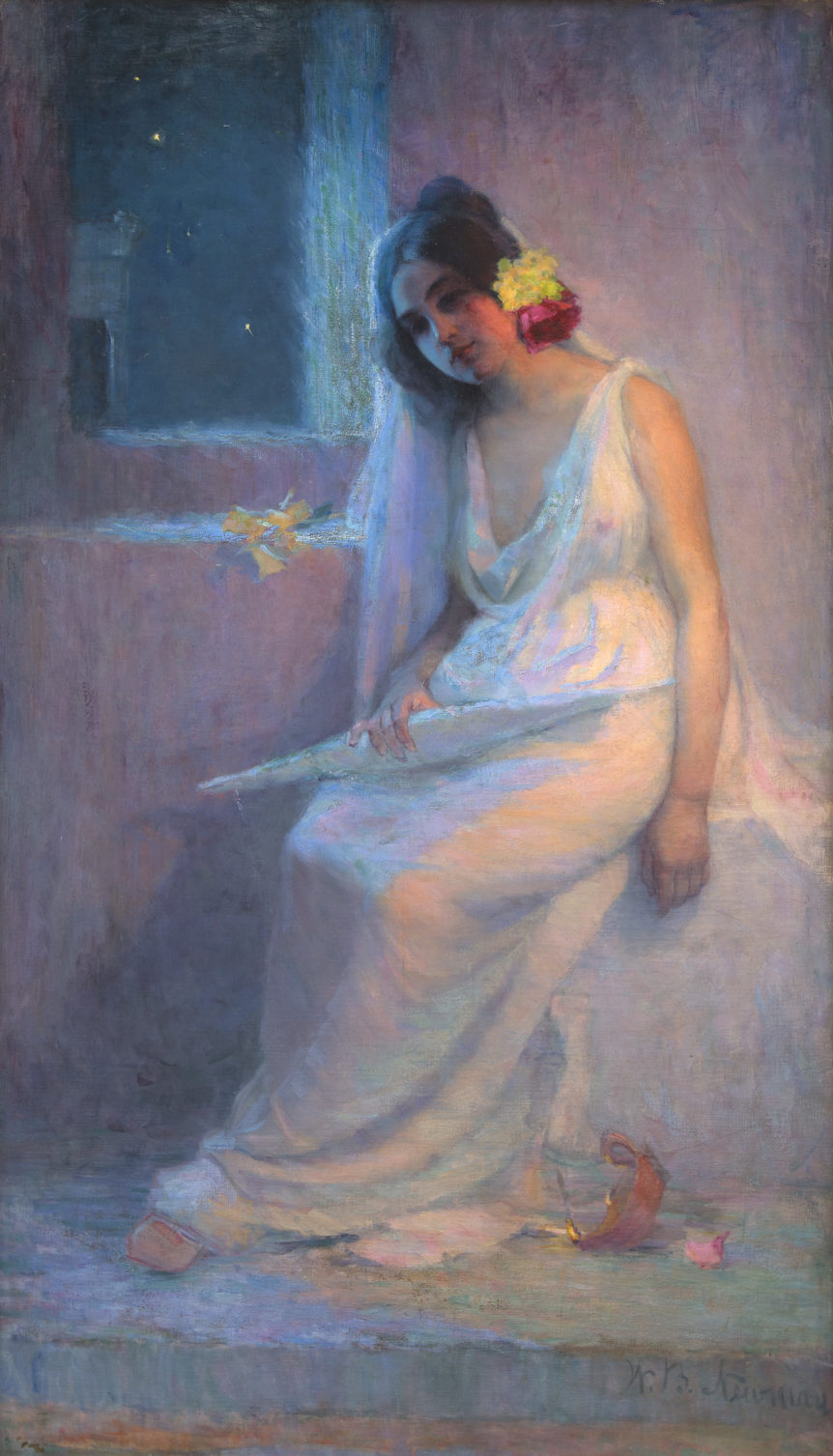 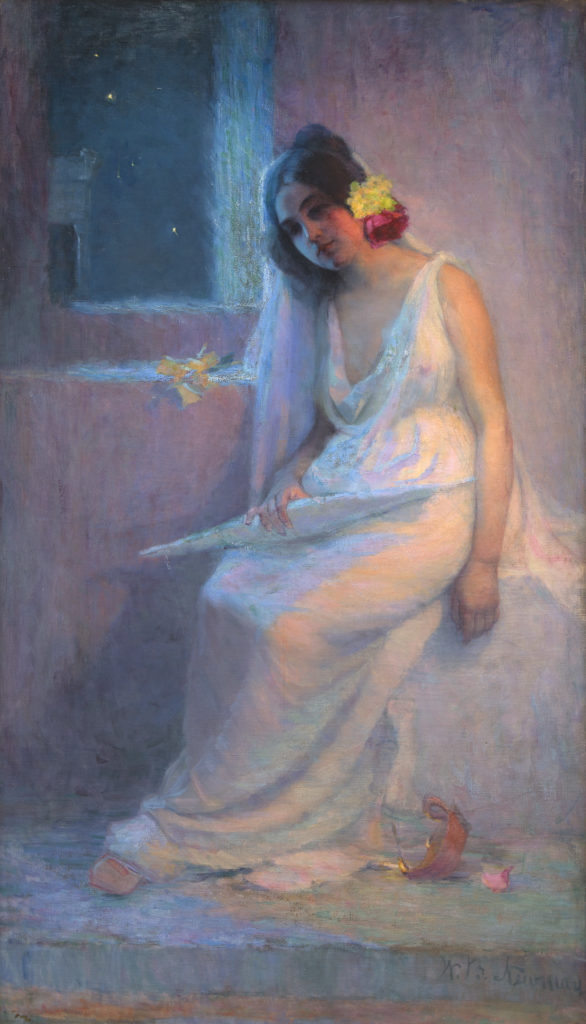 While in New York recently, Stan Mabry, a fine arts dealer, did a double take. He saw a painting that he had known of for many years, but only as the centerpiece among many works of art in a black-and-white photo of a Paris studio in the 1890s. How had it ended up here, and what had been its course in the intervening years?

Nearly 130 ago, Willie Betty Newman, a woman from Tennessee with a talent for painting, traveled to Paris to hone her skills, studying with the great masters of the academic tradition at the Académie Julian. She excelled at rendering the human figure with the emotion of William-Adolphe Bouguereau (one of her instructors), but with an overall effect less saccharine. She thrived there in the center of the art world, and traveled, studied, and painted in France for twelve years, regularly submitting works to the pinnacle of judgment for the art establishment: the Salon de Paris.

Newman’s international record can be discovered in archives, but, as with so many women artists, she has not benefited from canonical attention. She is well known, though, among Tennessee art enthusiasts, for she returned home around 1902 to teach and support herself through prestigious portrait commissions for the next twenty years. Mabry is one of these knowing enthusiasts. He established a gallery, Stanford Fine Art, in Nashville in 1987, and has always kept his eyes open for paintings by Newman, which rarely come up for sale. In July 2018 he came across The Foolish Virgin, which had been privately owned and not exhibited for more than a century.

It is a historically well-documented painting. On January 8, 1897, the Nashville American wrote that it “shows such wonderful color scheme, she regards as probably her best effort. Those who have seen it will well remember the mingling of the moonlight and lamplight. A woman is seated by an open window with distaff thrown idly down, the lamp flickering out and the moonlight pours in upon her, producing a marvelously beautiful effect.” With this allegorical subject referencing a parable from the Gospel of Matthew, Newman aligns herself with her academic training. Yet the painting’s surface does not show the clean finish of traditional painting, but rather an experiment with the looser brushwork and dappled light of the impressionists, by then well established in France. This is particularly apparent at the windowsill, where gentle beams of moonlight shine across the roughly textured green of the window’s edge, casting a cool light upon the young girl’s face. There it mingles with the warm glow of the interior to highlight her youthful rosy cheek. Following the parable, the girl seems to be drifting off to sleep, her languid posture echoed by the cast-off flowers in the window and oil lamp that seems to have just dropped from her hand. Just below the lamp, in the lower right corner, the signature “W. B. Newman” conceals the fact that the artist is a woman.

The following year, in 1898, Newman submitted The Foolish Virgin to the Salon, where it was purchased by William Fleitman and remained with his family in New York for some years, changing hands to another private collector in the mid-1970s. 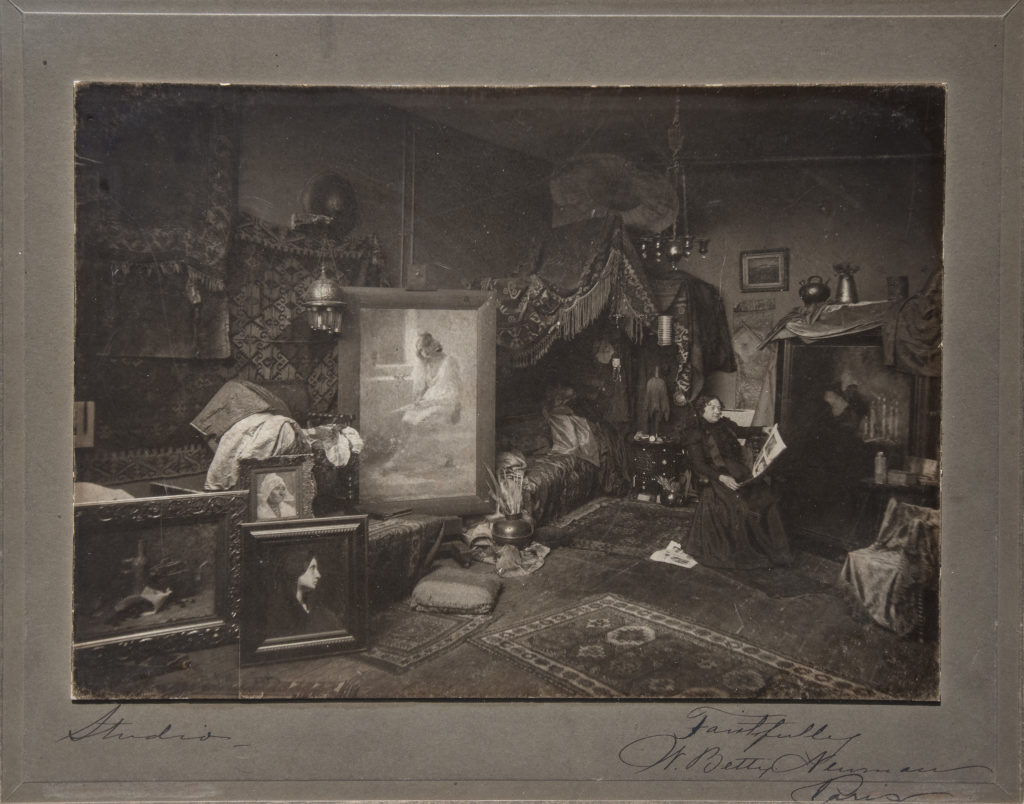 Mabry had traveled to New York earlier this year to consult with an expert in another field. The memory of the photograph he had acquired in the late 1980s came to the forefront of his mind as he realized that this expert was the owner of The Foolish Virgin. Mabry collects ephemera about artists, especially photographs of their studios, as they lend a human face to the gallery’s paintings and insight into the worlds of their creation. This particular photo shows Willie Betty Newman seated in her Paris studio. The single room is covered with exotic rugs, metalwork, and a grand, draping canopy over her bed, perhaps inspired by the Orientalist bent of another of her instructors at the Académie, Jean Joseph Benjamin Constant. Her art, however, does not exhibit that Eastern interest, as seen in paintings at all stages of completion placed around the room. The centerpiece is a bright view of a young woman by a window: The Foolish Virgin. It is the largest painting in the room and rests on an easel, suggesting the finishing touches are yet to be added.

By chance, luck, and a keen eye, Mabry saw this painting so familiar from that photograph and negotiated with the collector to purchase it. Now this notable work by a pioneering woman artist is in Mabry’s gallery, back in Newman’s home state of Tennessee for the first time in its history.