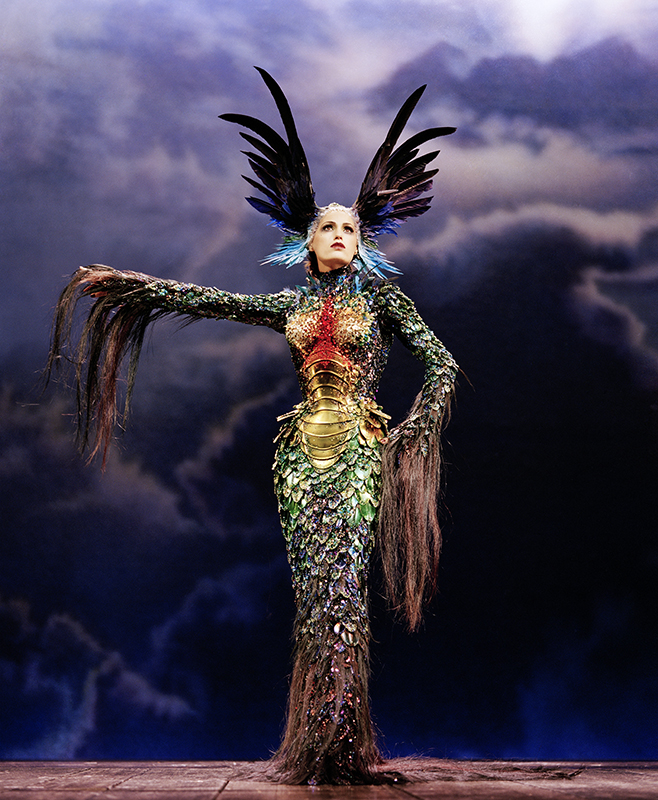 Art and fashion have always been intertwined, the merit of the former often being subject to the caprices of the latter, yet “fashion” (that is, “clothes) is a relative newcomer in museums. But it’s quickly become their bread-and-butter, with exhibitions like the Victoria and Albert’s Alexander McQueen: Savage Beauty and the Met’s Heavenly Bodies: Fashion and the Catholic Imagination beating out more traditional displays of artworks and artifacts to set attendance records at their respective institutions. Another blockbuster fashion exhibition, Thierry Mugler: Couturissime, closes this weekend at the Montreal Museum of Fine Arts, having become one its ten most popular exhibitions of all time.

This first museum exhibition for the couturier encompasses more than 150 feathered and plasticized wearables, some on display for the first time, as well as archival documents and photos by Helmut Newton and David LaChapelle, among others, which paint a compelling portrait of the freewheeling and creative nature of late twentieth-century haute couture. But as indicated by the curators’ choice of subtitle—“couturissime,” that is, “couture-ism”—and in keeping with the special seriousness museums affect when examining pop culture, the show is really about an idea.

“I always felt fashion wasn’t sufficient in itself,” Mugler has said, his words recalling what Friedrich Nietzsche wrote about Richard Wagner: that he was a “commentator of the ‘Idea,’” a composer whose music required an armature of Teutonic myths (myths that were, incidentally, embraced by the Nazis as part of their giddy Aryan playacting) to contextualize it. In the Wagnerian vein, Mugler, who danced ballet professionally as a young man, has always gravitated toward spectacle. His first runway show, an immersive experience staged at the Zénith concert hall in Paris in 1984, called for sixty models dressed as angels, Madonnas, or wrestlers to strut their stuff through a blizzard of paper snowflakes. A year later he costumed the Comédie-Française’s production of Macbeth, and in 1992 he directed George Michael’s fashion-themed Too Funky music video (and fell out with Michael in the process). More recently he’s created the outfits for Cirque du Soleil’s Zumanity show in Las Vegas, as well as Beyoncé’s 2009 “I Am . . .” world tour.

Mugler’s idea is that of fashion-based self-transformation, a brand of transhumanism, itself a trendy repackaging of Nietzsche’s idea of the Superman. It’s an idea finding fertile soil in this age of live-action-role-playing and Comic-Con, and one that Mugler has embraced in a very personal way. Since retiring in 2003 (his brand was revived in 2013 without his involvement) he’s transformed himself into a hulking geriatric muscleman with the help of a rigorous weightlifting regimen, superior nutrition, and plastic surgery. “I’d like to look like a statue by Arno Breker,” he told French fashion journal Numéro, and to complete the picture has started going by his Germanic first name, Manfred. From transforming women to transforming himself, it seems this Frenchman, now superman, has come full circle. Thus Spake Mugler?