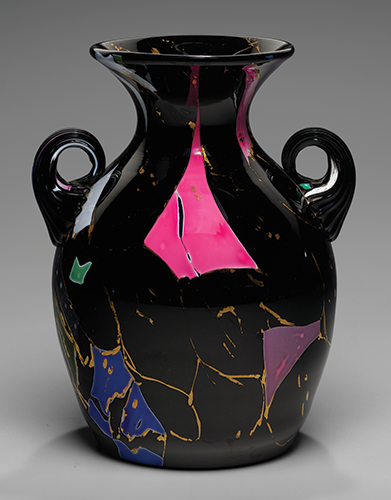 Glass has played a vital and often intimate role in the nation’s culture. A new book, American Glass: The Collections at Yale, brings together a diverse selection of objects in the medium from across the university in acknowledgement of the importance of glass in fields as dissimilar as science and technology, the arts, and domestic life. The wide-ranging sampling illuminates the ubiquitous influence of this versatile material.

At the core of the book are the blown and pressed household wares that lawyer and businessman Francis P. Garvan amassed from the 1910s through the 1930s, and which he donated to the university beginning in 1930. Garvan’s acquisitions were guided by a series of advisers, among whom was the prominent glass expert Rhea Mansfield Knittle. The story of Garvan’s collection is, in many ways, the story of American glass collecting during its formative and seminal years.

Many of the pivotal personalities and events make appearances, and echoes of the era’s predilections survive in the collection’s strengths and biases. More traditional forms are considered alongside beguiling objects—such as one of the oldest complex microscopes in the United States, which was purchased by Yale College in 1735—that broaden our expectations of glass and speak to the centrality of the medium in American life. Below are some highlights from the Yale collections. 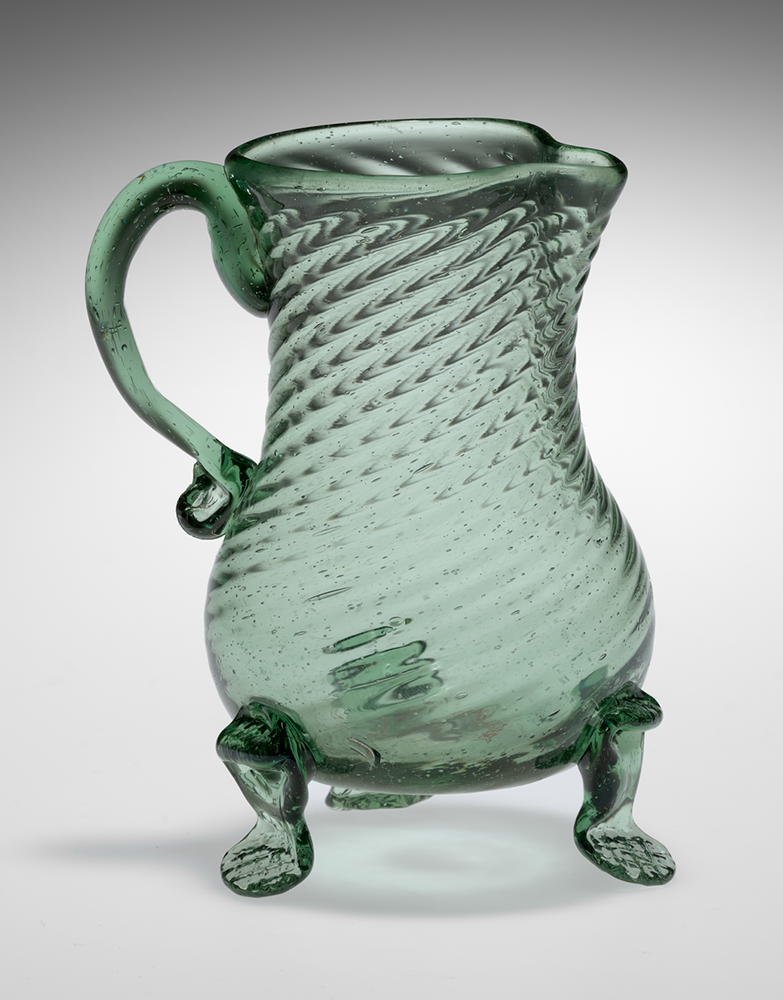 The American Flint Glass Manufactory, established in 1764 by the German-born entrepreneur Henry William Stiegel, was one of the first successful glass-houses to operate in the North American colonies. The manufactory employed numerous craftsmen of German extraction, and many of its wares had a Continental European flavor. This rare cream pitcher, however, with its swollen belly lifted up on three cabriole legs, is an English form, indicating the extent to which Stiegel expanded his production to appeal to clients accustomed to imported British glass. Stiegel’s gaffers (master glassblowers) overlaid the English shape with Germanic details, including the swirled, ribbed body and the decorative waffle-shaped pincering at the tops of the legs and on the feet. 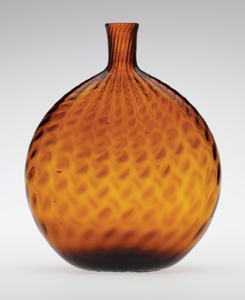 Pioneering glass scholar Rhea Mansfield Knittle worked on retainer to build the glass portion of Garvan’s expansive collection of Americana. Their animated correspondence documents her discoveries as well as their close friendship: “While [in Chicago] I bought for you, on my own judgement, a broken swirled and fluted amber Grandfather’s flask, one of the rarest bottles in the country,” Knittle excitedly wrote to Garvan in March 1930. “I did not dare risk the chance of letting it stay there another 24 hours.” The nearly circular proportions give the flask a commanding stance, which is augmented by the radiating diamond pattern that causes the amber glass to appear to flicker. 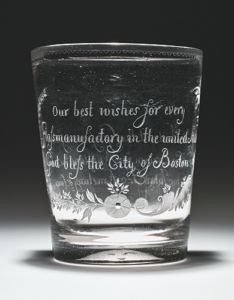 New Bremen Glass Manufactory, Frederick County, Maryland, 1789. Engraved “Our best wishes for every/ Gla∫smanufactory in the united States/ God ble∫s the City of Boston” on the obverse; “Made at the Gla∫smanufactory/ New Bremen in Maryland the 23 Jan. 1789/ by John Fr. Amelung & Comp.” on the reverse. Blown and engraved potash-lime glass; height 5 5/8, diameter 4 5/8 inches. Mabel Brady Garvan Collection.

This imposing tumbler, made at the New Bremen Glass Manufactory owned by John Frederick Amelung (1741–1798), documents the aspirations of the American glass industry immediately following the Revolutionary War as well as the efforts of one of its most ardent proponents. German-born Amelung advocated for tax exemptions and interest-free government loans to ensure the longevity of the American glass industry. In presenting an engraved tumbler to the founders of the Boston Crown Glass Company, he declared his support for the new firm and for Boston’s legislative commitment to local glass manufacturing. The elegant lettering of the inscription is confidently executed and framed by delicate leaves and scrolls. 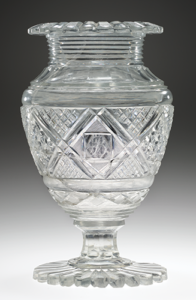 During the Marquis de Lafayette’s celebrated tour of the United States in 1824 and 1825, he visited the Pittsburgh Flint Glass Manufactory, owned by the enterprising Benjamin Bakewell (1767–1844). Bakewell presented him with a matched set of blown and cut glass vases. This dazzling vase, which descended in the Bakewell family, relates to one of the Lafayette presentation pieces and was likely the sample. The complexity of the cutting and the overall scale reveal Bakewell’s ambition to make glass rivaling that of Europe, a sentiment with which Lafayette agreed when he favorably compared Bakewell’s gift to glass made by Baccarat in France. 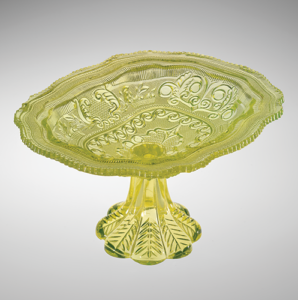 As with many items produced on a factory floor, pressed glass made use of interchangeable parts; the oblong bowl of this compote was also the base for a covered vegetable dish. The tall shaft and splayed foot seem to evoke the “princess feathers” that decorate the interior of the bowl, but they are rendered in a fairly crude manner. The mismatched elements, however, are unifed by the vibrant yellow glass. Uranium, or “canary,” glass was introduced in the mid-1840s, around the same time the textile and wallpaper industries developed aniline dyes that made a range of vivid colors fashionable and economically viable to produce. 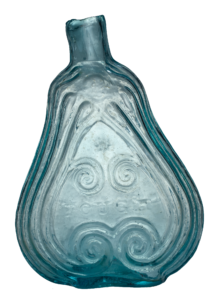 General Zachary Taylor’s lack of pretense among his troops earned him the nickname “Old Rough and Ready,” and his popularity with the American public inspired the Whig Party to suggest that he give up military life and run for president in 1848. Flasks like this one may have been distributed at political rallies or through regional Rough and Ready Clubs. The prominence of the Whig slogan indicates that the political function of the flask was as important as its being a receptacle for alcohol, if not more so. 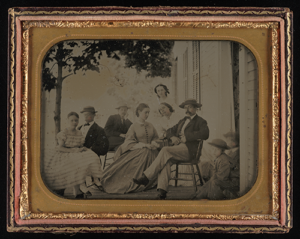 Glass-plate photography, developed in the 1850s, required sheets of thin, optically clear, and relatively inclusion-free glass. Preparing the glass plate involved applying a chemical solution and capturing the image while the coating was still tacky, a technique generally called a “wet-plate collodion process.” The ambrotype was a variation of the collodion process and quickly eclipsed the daguerreotype in popularity in the United States. This example, made in Northern California, depicts elegantly dressed members of the Peralta family seated outside one of their homes in present-day Oakland. The long exposure time captured a breeze ruffling a dress and the fidgeting of one of the children. 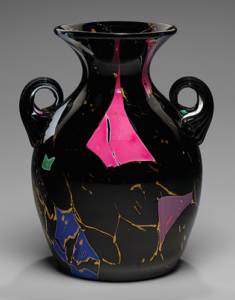 Art glass—vessels made primarily for aesthetic enjoyment— flourished in the 1870s with technically adventurous offerings such as the Mt. Washington Glass Company’s Sicilian line. Unusual in both composition and appearance, Sicilian responded to the popular interest in Roman ruins fueled by renewed efforts in the 1860s to excavate the ancient city of Pompeii. The designer, Frederick S. Shirley, even claimed he added lava to the glass to turn it black. The patches of color are separate pieces that are fused in place, emulating the so-called splash decoration used by Roman glassblowers. They make the amphora-shaped vase resemble an archaeological artifact that has been broken and reassembled. 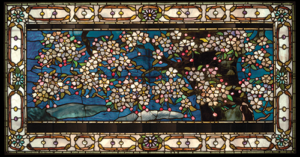 Made for the Baltimore home of Michael Jenkins (1842–1915), this stained-glass depiction of a bough laden with cherry blossoms demonstrates John La Farge’s longstanding fascination with Japanese art. The horizontal composition evokes Kanō-school folding screens, the pronounced contour lines of the lead suggest Edo-period ukiyo-e prints, and the ornamental border quotes the silk textiles that were used as backings for hanging scrolls. The breadth of references to Japanese art is matched by the range of glass types La Farge employed, including faceted jewels, rippled glass, and flower petals that are opalescent or flecked with colors, like confetti. 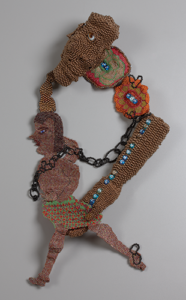 None Are Free Until All Are Free, beadwork necklace, Maryland, 2006

“I traveled around the world looking for myself,” says Joyce J. Scott, “looking for African influence in every place, and searching for any knowledge I could get about extending my family’s involvement with needle and thread.” She absorbed aspects of the Yoruba culture’s artistic traditions, current events, and folklore to create a body of work that mines issues of gender and the African-American experience. Her confrontational and assertive jewelry and sculptures undermine the stereotype of beadwork as a merely decorative handcraft. 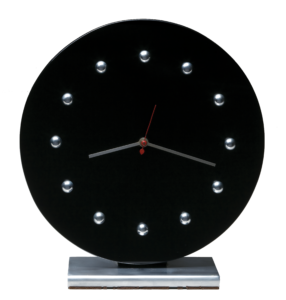 Carrara, a pigmented structural glass marketed by the Pittsburgh Plate Glass Company, was promoted for exterior use as a fade- and break-proof alternative to stone. In the late 1920s avant-garde designers brought structural glass indoors and adapted it to furniture and decorative objects. Gilbert Rohde used a circular slab of Carrara as the primary material for this electric clock (model no. 4083A), created for the Herman Miller Clock Company in 1933 and unveiled at the Century of Progress International Exposition in Chicago. The density of the glass gives the clock physical as well as visual weight and contrasts with the luminous chromium-plated base and the balls that demarcate the hours.