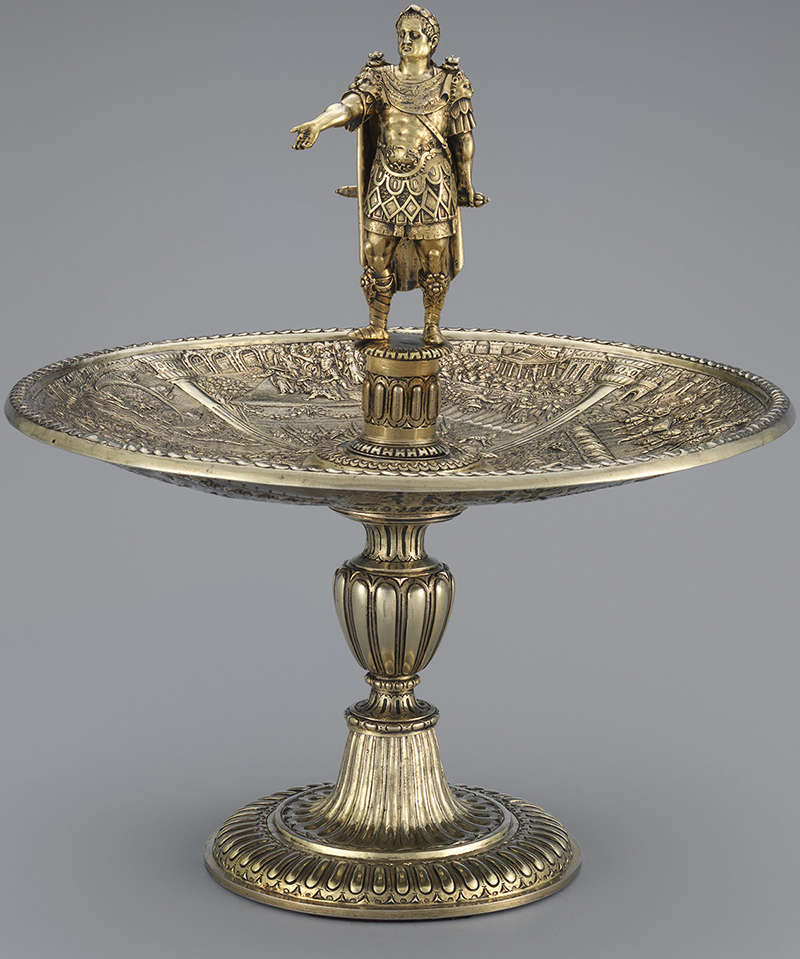 For rarity, virtuoso workmanship, and confused history, few works of sixteenth-century silver compare with the dozen works known as the Aldobrandini Tazze (Italian for shallow wine cups set on tall stems). Named for Cardinal Pietro Aldobrandini (1571–1621), an early owner, these extraordinary works are the focus of the Metropolitan Museum of Art’s exhibition The Silver Caesars: A Renaissance Mystery.

Each tazza stands more than a foot tall and boasts a finely cast silver statue of one of the Roman emperors, from Julius Caesar to Domitian, whose often-scandalous biographies form the ancient classic Lives of the Twelve Caesars by the Roman historian Suetonius. Each cup is opulently chased with four detailed scenes from the life of the respective emperor, derived from Suetonius. Little is known about the creation of these masterpieces or their makers, though modern scholarship leans toward a workshop of goldsmiths in the Habsburg-ruled Netherlands. The erudition evident in the narrative scenes has led to the hypothesis that the silversmiths collaborated with a scholar in choosing and planning them. Each tazza is meant to be “read” as much as used and looked at.

The complete set has not been seen together since the mid-nineteenth century, when it was dispersed into the hands of various dealers and owners. The cups were misidentified and mismatched; some were gilded; several were fitted with new feet in the neo-renaissance style by a nineteenth-century Parisian dealer. Through digital technology, visitors will be able to explore the tazze and their fantastic antiquarian imagery in remarkable depth, while investigating a history alluringly shrouded in obscurity.

The Silver Caesars: A Renaissance Mystery • Metropolitan Museum of Art • to March 11 • metmuseum.org