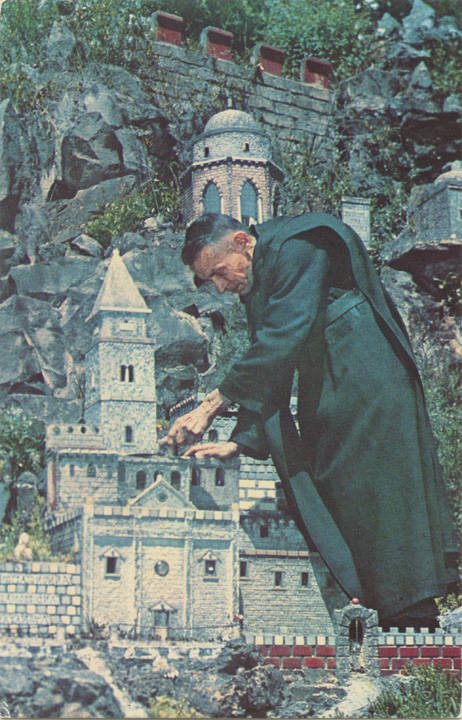 Nestled in the stone of a quarry on the grounds of St. Bernard Abbey in the small, Deep South town of Cullman, Alabama, lies the Ave Maria Grotto. The life’s work of a disabled Benedictine monk who devoted some fifty years to its construction beginning at the turn of the twentieth century, the grotto features over one hundred miniature reproductions of important religious sites and structures from around the world, including St. Peter’s Basilica and a model of ancient Jerusalem. Here’s the story. (Messy Nessy Chic)

It’s an ornithological art history mystery. How can it be that a sulfur-crested cockatoo—a non-migratory bird indigenous to Australia, Indonesia, and the Philippines—is depicted in a 1496 painting by Italian Renaissance master Andrea Mantegna? The New Yorker’s Rebecca Mead investigates. (New Yorker)

As it turns out, the “start of culture, the start of abstract thinking, the birth of art” happened a lot earlier than previously thought. A team of German researchers have concluded that a decoratively carved deer bone fragment found in West Harz is more than fifty-one thousand years old and that its carvings must have been made by Neanderthals, representing the beginnings of modern cognition. (Art Newspaper)

Writer and journalist Jess McHugh taps into the wonder we experience as children with The Quiet Mysticism of Almanacs—part history and part ode to the reference format that offers a “wonderfully freeing randomness” unduplicated in the digital age. (Los Angeles Review of Books)

In his 1857 Dred Scott decision—the ruling that Scott, who had lived in free territories for five years, must return to enslavement—Chief Justice Roger B. Taney opined that African Americans “had no rights which the white man was bound to respect,” at least at the time of the republic’s founding. That phrase, if somewhat obscure now, was, in the mid-nineteenth century, put to multiple and ingenious uses by abolitionists, confederates, and other actors. (American Scholar)

In his essay On Taste, writer Thomas Kaminski makes some grand assertions about the human response to art, and how we’ve come to ascribe value to it. One such is that there are “no wholly intuitive responses to [art]” and that “taste must always be trained.” We understand the broad strokes of the thesis, but can’t entirely agree with such a sweeping generalization. What do you think? (Claremont Review of Books)

Imran Shamsunahar explores the links between capitalism and Islam. Muhammad himself was frank about the virtues of wealth accumulation: “Whoever desires the world and its riches in a lawful manner, in order to withhold himself from begging, or to provide a livelihood for his family, or to be kind to his neighbours, will appear before God on the Last Day with his face as bright as a full moon.” (Areo)

Here’s the story of photographer Mike Disfarmer and his life’s work, which has stirred up controversy over ownership. When his studio was demolished after his death, his glass plate negatives were salvaged, stored, and later offered to a newspaper for sale. The riveting qualities of Disfarmer’s technically flawed but direct, raw, and soulful images of the people of the Arkansas Ozarks led to his work being published, and subsequently exhibited at the International Center for Photography. Today Disfarmer is considered one of the great portraitists of the twentieth century, and his heirs are battling for the rights to his valuable estate. Fascinating story, told well here. (New Yorker)

Since 1933, the Pageant of the Masters, an event featuring tableaux vivant recreations of important works of art, has been produced in Laguna Beach, California, by the Festival of Arts. The eighty-eight-year run of the pageant was only interrupted during World War II and during last year’s Covidian summer. Sure, all that attendees get is a certain surface-level experience of art, and the event has been mocked aplenty for this, but the theatrical elements are noteworthy. This year’s theme, Made in America: Trailblazing Artists and their Stories, will feature works by artists including Thomas Sully, George Caleb Bingham, Edmonia Lewis, and Edward Hopper. And don’t miss Matthew Rolston’s show Art People: The Pageant Portraits, on view concurrently. (Festival of Arts/CNN)

Although it might be karmically unwise to publish a biography before its subject’s death, Hermione Lee’s Tom Stoppard: A Life does plenty of real-world good to the playwright who brought us Rosencrantz and Guildenstern Are Dead and the Coast of Utopia trilogy. (Hudson Review)

During the 1940s automobile makers began to use a hand-painting process that resulted in a significant amount of overspray. After layers of different colors were applied to different cars, and baked and cured between coatings, gobs of leftover paint formed into stratified gemlike objects that could be cut and polished for use in jewelry. The accidental art material is called Fordite, and well worth a look if you have never seen it. (Messy Nessy Chic)