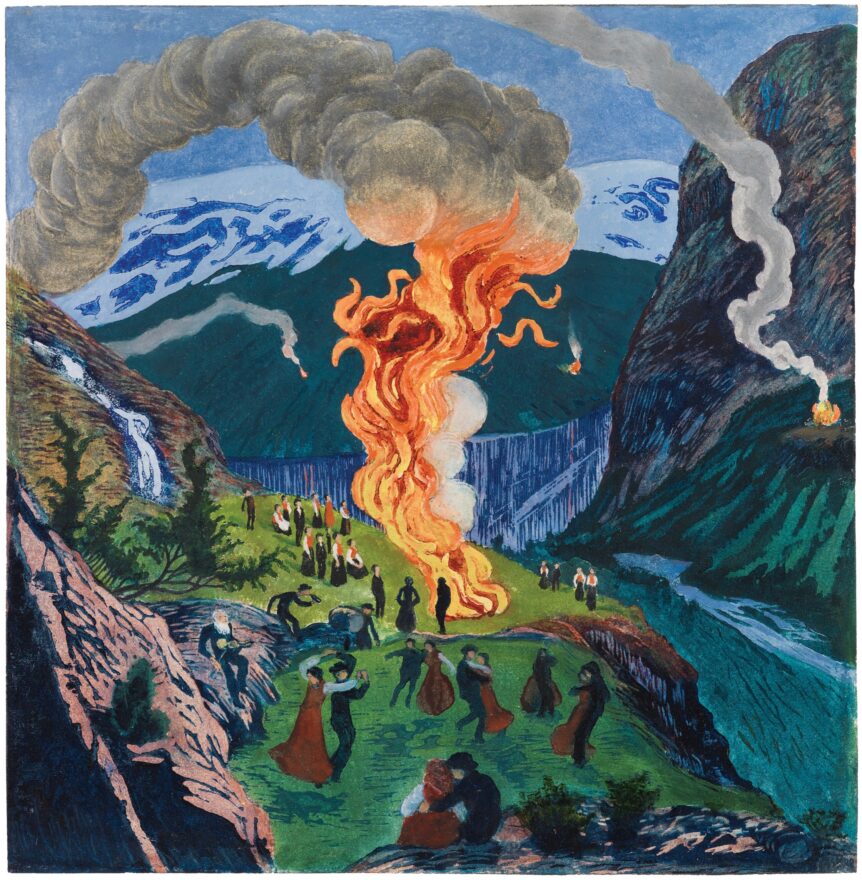 With the September opening of Simple Pleasures: The Art of Doris Lee, the highly successful Depression-era painter receives long overdue attention with her first major retrospective. Co-curated by Barbara L. Jones and Melissa Wolfe, the show opens at the Westmoreland Museum of American Art and features paintings, drawings, and prints spanning the artist’s career, including her most widely known work, Thanksgiving, 1935. (Westmoreland Museum of American Art)

Throwback Thursday! In 1986, “the most beautiful magazine in America” produced a television ad inviting new readers to subscribe and tempting them with a bonus gift of a historic, limited edition reprint of the very first issue of the magazine. Can you guess the publication described above? A hint: the magazine will be celebrating its centennial this coming January. (YouTube)

The Baltimore Museum of Art has recently made great strides towards becoming a more inclusive institution—through, for example, the controversial move to deaccession work by white male artists in order to fund the acquisition of work by female artists as well as those by Black, indigenous, and other artists of color. Another initiative will come to fruition in March of 2022 with the exhibition Guarding the Art, which will feature works chosen by seventeen of the museum’s security staff. Who spends more time in quiet contemplation of art than a museum guard? (Smithsonian Magazine)

Art critic Peter Schjeldahl devoted a recent column in the New Yorker to a Norwegian painter and contemporary of Edvard Munch, Nikolai Astrup. The Clark Institute recently debuted the show Visions of Norway, featuring the “enchanting” work of the artist Schjeldahl felt compelled to promote. We thank him for doing so. It is indeed surprising that this artist has gone largely unknown to many of us for so long. (New Yorker)

Rachel Wetzler examines the contemporary art world through the lens of fiction published in the past decade. There appears to be a clear and consistent trend toward skepticism and a clichéd vision of the art world that is “more often than not, represented as a ridiculous shell game in which empty provocation is propped up by canny marketing and rampant financial speculation.” She argues that such pessimism is unsatisfying and perhaps even unfair. We’d like to read her novel. (Art in America)

While Rembrandt van Rijn obviously explored numerous human subjects in his paintings, a particular animal caught his attention and fascinated him as well. Here’s the story of Hansken, the Asian elephant from Sri Lanka that was brought to Amsterdam during the eighteenth century and caused quite a stir. The exhibition Hansken, Rembrandt’s Elephant is open and on view at the Rembrandt House Museum through August. (New York Times)

With another referendum on Scottish independence on the horizon, and that of Wales perhaps soon to follow, novelist and historian James Hawes takes a moment to explore the fractured history of the UK. Antipathy beween the islanders is, of course, nothing new. As the partisan Peter Longcroft wrote during the reign of Edward II, “May Wales be cursed by God and Saint Simon! For it has always been full of treason. May Scotland be cursed by the mother of God!” (Prospect)

Mohammed Rafieh has received an extraordinary amount of press for his small stall in a Tehran market. The shop carries only colored pencils. Unboxed and stacked floor-to-ceiling, they make for quite a visual presentation. (Present and Correct)

The Cannes Film Festival, delayed a year due to Covid, just concluded and Wes Anderson’s latest, The French Dispatch, premiered to considerable acclaim. The sets look gorgeous, and the movie plot centers on the French outpost of the Liberty, Kansas Evening Sun newspaper. Anderson has called the film a “love letter to journalists,” and we can’t wait for its general release. (Hyperallergic)

Also coming soon: The Electrical Life of Louis Wain—a period drama about the life of “the man who drew cats.” Played by Benedict Cumberbatch, Wain was an “oddball and outsider” painter of the early twentieth-century who devoted his work almost exclusively to depicting anthropomorphized cats. Cumberbatch, while researching his role and the schizophrenia that Wain suffered from, came to feel profound compassion for the artist, and urges us all to be kind to such “outsiders.” (Guardian)

After almost fifteen years working in the conservation department at the Morgan Library and Museum, Frank Trujillo has a lot of expertise and insight to share about the preservation of rare books and manuscripts. Here’s a recent and very brief interview for you bibliophiles out there. (Art in America)

One tip Trujillo didn’t mention, but which should be obvious to all of us: if you’re about to sneeze, cover your mouth while holding an illuminated manuscript. Writer Olivia Campbell explores what is lost when archive-worthy historical texts are destroyed by visiting some of the leading conservation centers of the world. (Atlantic)

Art critic Philip Kennicott invites a meteorologist to join him in examining a handful of important artworks. By teaming up, they hoped to discover the logic behind artists’ decisions to depict certain types of atmospheric conditions. The pair’s weather-based observations are really quite fascinating, both in scientific and aesthetic terms. (Washington Post)

We think it was a missed opportunity not to ask the weatherman about an iconic photograph by Alfred Stieglitz, Winter, Fifth Avenue, from 1893. If you’d like to “think different” about weather depicted in images, this print is an excellent place to start. (Vintage Everyday)