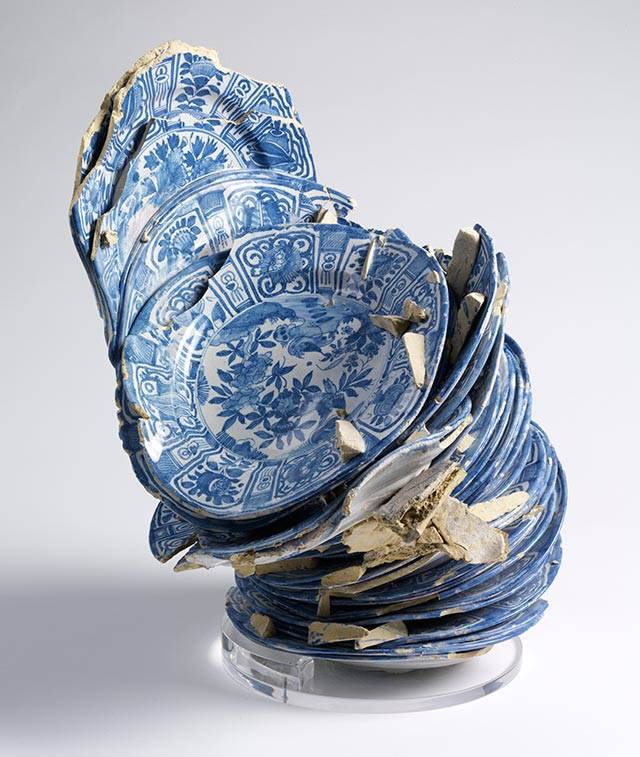 For those of you interested in ceramics, here’s a glossary of all the terminology you should know, from “A-marked” to “Factory Z.” We’ll bet you can’t find a better primer. (Victoria and Albert Museum)

Entredentolignumologists collect toothpick boxes, tyrosemiophiles go nuts for labels on wheels of Camembert cheese, and pannapictagraphists . . . well, you’ll just have to read the article to find out what they collect. Here’s a list of twenty names for people whose collections are highly focused. (Mental Floss)

Here’s an easy one: bibliophile. This former neurologist certainly is one, though he might more aptly be called a periodicalphile: his collection consists of some eighty-three thousand magazines. Dr. Steven Lomazow’s tremendous collection is on view in a new exhibition at the Grolier Club in Manhattan, which is organized chronologically as well as thematically, around categories such as baseball, entertainment, and race. Browse Magazines and the American Experience and learn more about this great collection, in which TMA is proudly featured. (New York Times/American Magazine Collection)

Harry Smith was a filmmaker, painter, and collector, but primarily considered himself a cultural anthropologist. His three-volume Anthology of American Folk Music (1952) helped spark a revival of interest in the genre during the 1950s and ’60s. When he wasn’t documenting music, Smith collected objects as diverse as Ukrainian Easter eggs, string figures, and paper airplanes. His collection of 251 homemade airplanes that he found on the streets of New York City is documented in photographs and maps in the quirky book Paper Airplanes: The Collections of Harry Smith. (Guardian)

By now we’re sure you’ve heard the origin story of the playground singing game Ring around the Rosie, which might reference posy bouquets carried by Victorian ladies to mask unpleasant odors. Among the many things a woman carried on her chatelaine was a posy-holder or port-bouquet. Here’s a well-illustrated article on these beautiful ornate objects. (Messy Nessy Chic)

Here’s an explainer video on those long-beaked bird masks doctors wore while treating patients stricken with Bubonic Plague. It’s a look that seems calculated to frighten, but those masks were more functional than you might think. (Laughing Squid)

STRANGERS TALK ONLY ABOUT THE WEATHER

The southern states are not the only ones experiencing strange weather this winter. Athens, Greece, was recently blanketed by snow, offering us the rare opportunity to see the Acropolis looking “like a magical ancient wedding cake.” (Artnet)

While we’re on the subject, are you familiar with the six weather journals that outsider artist Henry Darger compiled over a period of ten years? Though on the surface they offer nothing more than day-to-day accounts of meteorological activity—as well as commentary on what the local weatherman got wrong—nothing is simple or straightforward with Darger. Click through to Lytle Shaw’s essay on Cabinet. (3 Quarks Daily/Cabinet)

In similar fashion, American filmmaker, writer, musician, and painter David Lynch has been running weather reports on his YouTube channel almost every day for the past year. Lynch’s reports aren’t as dark and gloomy as Darger’s are—perhaps it’s the different climatic experience in Los Angeles that gives Lynch a sunnier disposition. He ends each report with “have a great day” and a wave. (David Lynch Theater/YouTube)

No rumination on the highly personal experience of changing weather would be complete without mention of Tom Waits’ classic Emotional Weather Report, from his 1975 album Nighthawks at the Diner (obviously inspired by Edward Hopper’s painting). “Things are tough all over/ When the thunder storms start/ Increasing over the southeast/ And south central portions/ Of my apartment, I get upset./ And a line of thunderstorms was/ Developing in the early morning/ Ahead of a slow moving coldfront./ Cold blooded.” (Tom Waits/YouTube)

Sutton Hoo articles have become something of a commonplace in this space over recent weeks. Let’s not break the pattern. Here’s a blog post that focuses on the forgotten archaeologist who made the 1939 discovery of a lifetime, Basil Brown (played by Ralph Fiennes in Netflix’s The Dig). (Britain Is No Country for Old Men)

Cineastes take note of this essay on Russian filmmaker Andrei Tarkovsky’s second feature, Andrei Rublev, which debuted fifty-five ago. The movie follows  the life of a fifteenth-century monk and icon painter in a pre-Tsarist society perverted by greed and overrun by Tatars. The film is a sprawling meditation on faith and art. (Far Out)

“What the Big Bang is to cosmology, The Tale of Sinuhe is to literature,” argues critic Ed Simon in an essay about the c. 1800 BC narrative, perhaps the beginning of world fiction. Not only was Sinuhe novel, it represents the first historical attempt at transcribing consciousness itself, which has remained a cherished goal for writers ever since. (Millions)