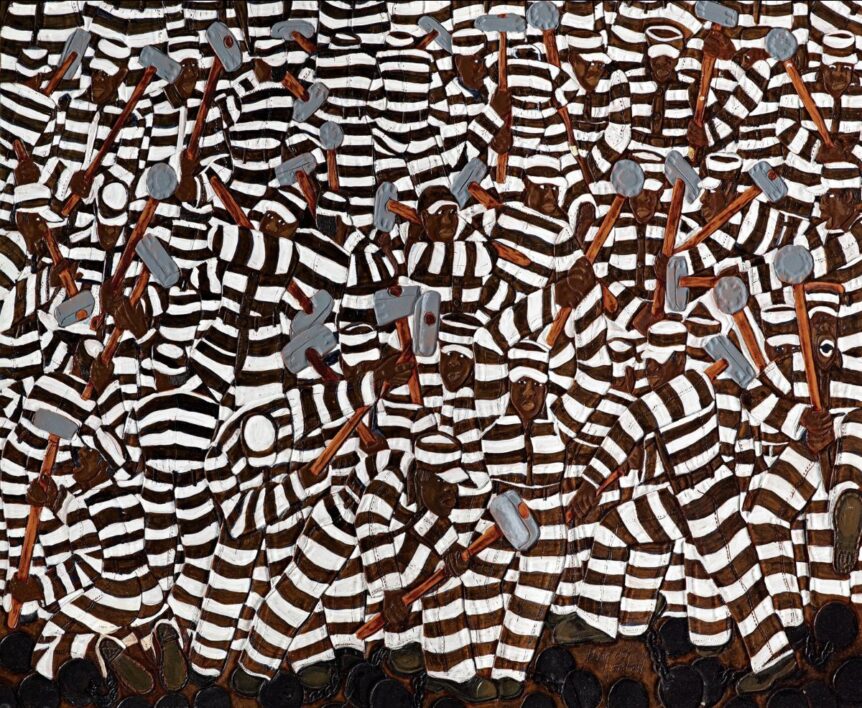 As you might have read here in the Eye, the remarkable life of the great self-taught artist Bill Traylor is being celebrated with a feature-length documentary produced by Sam Pollard and directed by Jeffrey Wolf. Bill Traylor: Chasing Ghosts is showing in select theatres and virtual cinemas (use code MAGTRAYLOR21 to claim your discount). This week Curious Objects host Benjamin Miller sits down with Pollard and Wolf to discuss the artist and their film. Don’t miss the airing tomorrow . . . and brush up on your Traylor with this article about the artist’s life and work. (The Magazine ANTIQUES)

On the subject of self-taught, folk, and outsider art, much has been written, and the genre continues to enjoy a tremendous amount of interest. If you’d like to know more about the most important movements and artists of the past century but aren’t sure where to start, here’s a handy list of the essential surveys. (Artnews)

One artist worth reading about is Winfred Rembert, who died last month at the age of seventy-five (New York Times). As a young man, Rembert worked in the cotton fields of the Jim Crow–era South, where he escaped a near-lynching and subsequently spent seven years on a chain gang. Using hand tools, paint, and leather, he made art to tell the story of his experiences as a Black man. His deeply moving first-hand account—transcribed from interviews conducted by Erin I. Kelly—can be read here. (New Yorker)

The High Museum of Art in Atlanta was one of the first museums to dedicate a department to the work of self-taught artists. Its deep holdings include the works of Nellie Mae Rowe, to whom a retrospective this fall, Really Free: The Radical Art of Nellie Mae Rowe, is dedicated. A Fayette County, Georgia, native, Rowe spent the later years of her life welcoming visitors to her home where she created installations of found-objects, as well as the handmade dolls, sculptures from chewing gum, and drawings that form the basis of the exhibition. The show will recontextualize her drawings as they relate to the art environment she built and called the “Playhouse.” (Artfix Daily)

Check out this breakdown of three drawings by Jean-Antoine Watteau from the Morgan Library’s director, Colin B. Bailey. Inventor of the fête galante genre, Watteau “with a fleeting evanescence that is almost impossible to put into words” committed to paper images of the models he brought into his studio. (Morgan Library and Museum/YouTube)

In March, the New York Times published the story of a woman who as a teenager modeled for Norman Rockwell, and who as an adult recognized herself in a painting advertised for sale. A couple of days after the story was published, a second Rockwell model contacted its writer, James Barron, who then orchestrated a reunion for the two women via Zoom almost seventy years after their sessions with the artist who often paid his models with a Coca-Cola and a nominal fee of $10. (New York Times)

To get a better sense of what modeling sessions for Mr. Rockwell looked like, have a look at this article about the studies for the Saturday Evening Post’s 1948 cover, a painting called The Gossips. The artist’s process, which proceeded from photographs and drawings, is deftly articulated. (Vintage Everyday)

In 1897 America’s oldest family-run stained glass studio was founded in Los Angeles by painter William Lees Judson, who operated the firm with his three sons and produced some of the world’s finest work in the medium. A new exhibition, Judson Studios: Stained Glass from Gothic to Street Style, is on view at Forest Lawn Museum in LA until September and reviewed here. (Smithsonian Magazine)

According to the design-forward elites at AD, it appears that the genre of interior painting is “totally” making a comeback. You may recall this compendium of “Historical Maximalism” from the ever-on-trend Messy Nessy, which is very much in line with what AD has discovered in the work of Pierre Bergian, SJ Axelby, and Jane Black. We can’t help wondering if this moment has Covid-19 to thank—before it struck would we ever have noticed how dull our white walls look? (AD)

Composed with word processors, the output of today’s writers is missing the charming errata, cross-outs, and marginalia that marked—pardon the pun—the work of earlier writers, who were bound to paper and pencil or pen. Here you can read Virginia Woolf’s  manuscript of her “Letter to a Young Poet” and vicariously experience the halting, searching process that is writing. (Morgan Library and Museum)

In 1947 Norwegian ethnographer Thor Heyerdahl sailed from South America to Polynesia on a balsa wood raft, a dramatic undertaking meant to prove the plausibility of his theory that colonization of the continent was undertaken by inhabitants of the archipelago. Seventy-three years later genetic studies indicate he was half-right—seafarers did cross the Pacific hundreds of years before Magellan—though from which landmass they came is still unclear. (New Atlantis)

It appears likely that we’ll see a return to travel this summer. Those whose wanderlust has been cruelly suppressed over the last year can be expected to hit the road given any excuse whatsoever, so how about this one?: ten Revolutionary War era taverns that you haven’t been to yet dot the east coast of the United States. If you happen to take such a trip, look us up when you get to Fraunces here in New York. (Journal of the American Revolution)

During the period from 1933 to 1939 President Franklin D. Roosevelt’s administration instituted reforms and regulations, created new agencies, and undertook public works projects under the rubric the “New Deal.” For several reasons, this is an excellent time to look back on that era and its projects and assess whether they actually worked . . . or whether it was in fact World War II that pulled the US economy out of the tailspin it’d been in since Black Tuesday, 1929. One thing we’ll probably all agree on is that this website is a magnificent source for information on every aspect of the period and its associated programs. (Living New Deal)