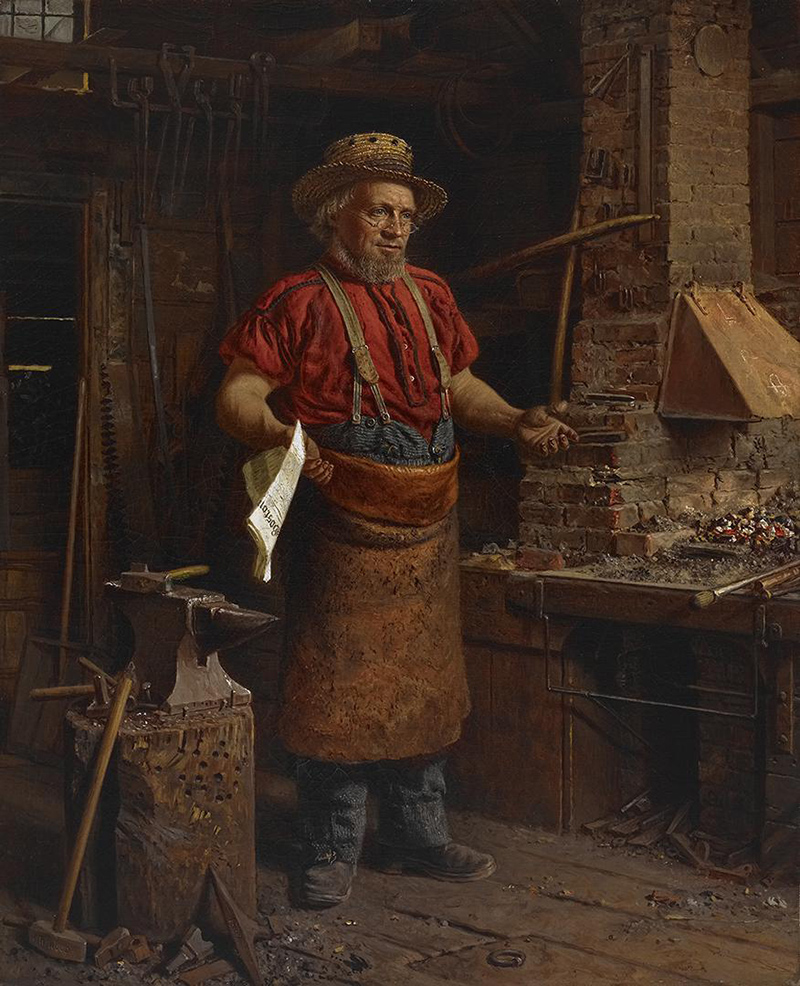 When I began writing this column, in the midst of the 2016 presidential election, I started with a simple premise. I wanted to show that antiques have something to say, not only about their own moment—in the more or less distant past—but also about our own. I’ve often chosen topics that resonate with recent headlines: debates about policing, fake news, or the refugee crisis. This year, it’s been hard to keep up. I heard a good joke recently: someday, historians at academic conferences will ask each other, “So, which month of 2020 do you specialize in?”

I’m feeling the passage of time particularly keenly at the moment, for while another election is on the horizon as I write these words, as you read them it will (hopefully!) be over and done with. To quote Albert Einstein, from a text he contributed to the 1939 New York World’s Fair time capsule: “I trust that posterity will read these statements with a feeling of proud and justified superiority.” And I’m guessing that no matter where you stand on the spectrum of American politics—liberal to moderate to conservative, fearful to hopeful, “Keep America Great” to “Dazed and Confused” to “Can We Just Skip Ahead to the Kamala Harris Administration?”—you are probably relieved the election is over, and feeling bruised from the last few months, and years. In other words, not all that eager to read more about politics. But I hope you’ll bear with me, as I offer here a few thoughts on the state of American democracy.

This being The Magazine ANTIQUES, I’d like to do this by taking a big step back, all the way to the aftermath of the Civil War. Thomas Waterman Wood, just then moving permanently from his native Vermont to New York City, was one of many American painters trying to make sense of the traumatic conflict through their art. His response was the three-part series A Bit of War History, now in the Metropolitan Museum of Art, which tells the story of a Black Union soldier in a Hogarthian manner. Wood first shows his protagonist as a recently emancipated “contraband,” then in uniform as a proud new recruit, and finally as a veteran, saluting patriotically but maimed and on crutches, his left leg amputated at the knee. This last picture is hard to look at today—its upbeat tone jars with the man’s brutal sacrifice—but for its time, it is remarkable for its sympathetic portrayal of a Black military hero.

Wood made his trio of paintings just as the war ended, and they in turn made his reputation, earning him membership in the prestigious National Academy of Design. But it’s his next major picture that I’d like to focus on here: Politics in the Workshop, completed in 1867. It depicts a blacksmith in a leather apron—the traditional attire of the artisan—holding in his right hand a curled-up Boston newspaper. We cannot read the morning’s headlines, but the painting’s title suggests that they contain some debatable topics, and this man is ready to talk them through.

It’s possible that Wood was drawing on personal experience when he conceived this image. His father ran a cabinetmaking workshop (the artist reputedly sketched out some of his early ideas on its plaster walls). The rustic appearance of the blacksmith in the painting, with his chin-curtain beard and wide-brimmed straw hat, may well be based on people Wood had known in Vermont. Even so, he was also self-consciously playing on an established trope: the rural artisan as a representative American type. Blacksmiths, in particular, had often been presented as symbolic of American independence and self-sufficiency: think of John Neagle’s extraordinary full-length portrait of Pat Lyon in his forge (1826–1827), so popular in its day that it was adapted as the central motif of a banknote; or Longfellow’s 1842 poem “The Village Blacksmith”:

His brow is wet with honest sweat

He earns whate’er he can

He looks the whole world in the face

And owes not any man

Such representations certainly did not capture the full picture of nineteenth-century American craft— for example, the fact that many blacksmiths in the antebellum period had been enslaved, and their workshops and tools forcibly taken away from them after the war. But, equally certainly, craftspeople were central to the nation’s sense of itself. Not for nothing were silversmith Paul Revere and the seamstress Betsy Ross retrospectively upheld as heroes of the Revolutionary era—thanks again to Longfellow’s poetry in Revere’s case, and some ambitious familial mythmaking in Ross’s. Sadly, she probably had little or nothing to do with the design of the Stars and Stripes, though she did run an upholstery shop for more than fifty years, before finally retiring at the age of seventy-six—arguably a much more significant achievement.

As I was writing my new book, Craft: An American History, I was impressed by artisans’ many contributions to our nation, which have gone far beyond physical making, and into the realm of shaping our identity. Wood’s Politics in the Workshop is a part of this tradition, and it depicts a genuine phenomenon: in the nineteenth century, skilled artisans were indeed the centers of their community. Without the trust of those they did business with, they could not have had their businesses at all. And while there have definitely been among them a fair number of rabble rousers (Revere was one, of course), craftspeople were generally a moderating force in national politics. The erosion of the artisan class, first by the industrial revolution and later by the decline of labor unions, is one example of the way that the broad middle of the country has lost its purchase on the national conversation.

We don’t need to revert to a craft economy in order to reclaim that middle ground. We do have to be a little like the blacksmith in Wood’s painting, though: spreading our arms wide, ready to embrace whatever form of debate should walk in through the door. That spirit of openness is essential to a functioning democracy, and it does indeed seem to be in short supply these days. But democracy is powerful stuff. If a painter could come up with an image like this in 1867—a moment when the country had far more grievous wounds to nurse than we do today—surely we can chart an equally hopeful way forward.

And so, O reader of two months hence, let me offer this, as a voice from the very recent past. However the election may have turned out, and however you might feel about it, let’s all try to see it in perspective. It’s just another chapter in our national story. After all, another 153 years down the road, another generation of Americans will be looking back at us. Let’s try to make them proud of what they see.