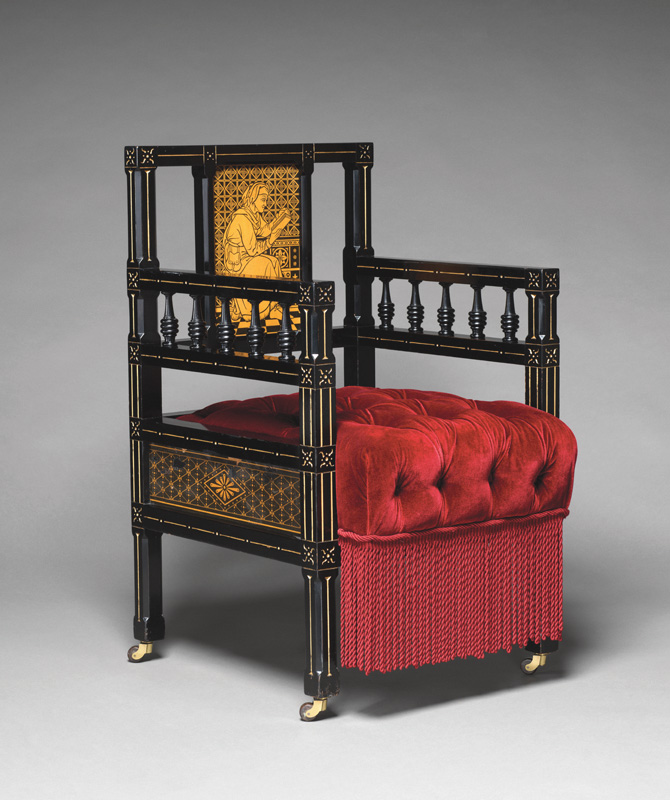 With its roots in the mid-nineteenth-century British design reform led by such figures as artist-poet-craftsman William Morris, architect Bruce J. Talbert, and visionary designer Christopher Dresser, high-style American aestheticism was the direct offshoot of Britain’s aesthetic movement. It was notably influenced by the sometimes-whimsical romanticism of English modern Gothic style and the exotic simplicity of Japanese forms. America’s aesthetic movement was popularized by such tastemakers as the English Gothicist and critic Charles Locke Eastlake, whose 1868 book Hints on Household Taste became a wedding gift for countless newlyweds here after its American publication in 1872.

The spirit of aestheticism was reinforced during Oscar Wilde’s 1882 American lecture tour, which had been arranged by the London impresario Richard D’Oyly Carte as advance publicity for the US tour of Gilbert and Sullivan’s operetta Patience (1881), their tuneful parody of the aesthetic movement.

Taking Eastlake’s lead, American pundits like Clarence Cook and Henry Hudson Holly urged readers to abandon the often machine-carved “excesses” of the Louis XV style, rococo revival furniture that had dominated the market since the 1840s—the C-curves, scrolls, and cabriole legs of chairs and tables, the elaborate naturalistic carvings of flora and fauna as ornamentation on sideboards and cabinets. Instead they advocated hand-craftsmanship, straighter lines, and simpler, rectilinear shapes embellished with flat, stylized decoration. In many examples, uncarved expanses of beautiful wood and burl veneers were exploited for their elaborate grain and rich color; in others, the wood, often cherry, was given a black “ebonized” finish inspired by Asian lacquer. Thus, American aestheticism forms a distinctive branch of decorative arts during the post–Civil War era; its imaginative forms and surface treatments vividly depart from conventional notions of Victoriana. Moreover, it paved the way for America’s arts and crafts movement, our flirtation with art nouveau, and eventually for the pared-down restraint of modernism.

Deedee and Barrie Wigmore are among the earliest and most astute collectors in this field. Founder and president of the prominent New York gallery D. Wigmore Fine Art, Deedee currently specializes in paintings from 1920 to 1980. Barrie is a retired partner of Goldman Sachs, author of books and academic articles on financial markets, and, since 2002, a trustee of the Metropolitan Museum of Art. Their collection of decorative works and paintings stands as one of the finest holdings of late nineteenth-century American art in private hands.

Having established the charitable Barrie A. and Deedee Wigmore Foundation in 1979, the couple has enjoyed a close relationship with the Met since the 1980s, sponsoring exhibitions and scholarly projects, donating objects and funding museum acquisitions. In 1999 they endowed the Deedee Wigmore Galleries in the Met’s American Wing.

Recently, the museum announced the couple’s promised gift of eighty-eight outstanding examples of American aesthetic movement and Gilded Age decorative arts and contemporaneous paintings from their collection. Their gift salutes the 150th anniversary of the Met’s founding, and it is currently being celebrated with the sumptuous exhibition Aesthetic Splendors: Highlights from the Gift of Barrie and Deedee Wigmore. It features some fifty objects, including important pieces of furniture representing the finest productions of leading American cabinetmakers and designers—Herter Brothers, Kimbel and Cabus, Daniel Pabst, A. and H. Lejambre, among them; as well as decorative ceramics by the Rookwood Pottery and other firms; metalworks by Bradley and Hubbard; brass furnishings from Charles Parker Company; an exquisite mantel clock by E. F. Caldwell and Company (Fig. 2); and stellar pieces of aesthetic jewelry by Louis Comfort Tiffany (Fig. 5).

Alice Cooney Frelinghuysen, the Met’s curator of American Decorative Arts, notes that “the Wigmores’ promised gift truly enhances and complements the museum’s existing holdings, contributing works by makers currently little represented and bringing together some of the most exceptional works of their kind. With the addition of the Wigmore gift, the museum’s collection will arguably be the finest and most important of its kind anywhere.”

As the show’s organizers, Frelinghuysen and her American Wing colleague, Elizabeth Mankin Kornhauser, curator of American Painting and Sculpture, joined me when I visited the Wigmores recently.

The couple lives in the Dakota, architect Henry Hardenbergh’s palatial, many-gabled 1881 masterpiece on Central Park West. And their authentic furnishings and decorations represent the era when that pioneering apartment building was spanking new. Painstakingly restored, their spacious apartment’s abundant woodwork, mantelpieces, and high, coved ceilings form the perfect backdrop to the collection. And between the period carpets, reproduction wallpapers and draperies, the elaborate ceiling decorations, and exceptional gasoliers (now electrified), the entire dwelling presents a serene, scrupulously researched evocation of consummate aesthetic decoration, as welcoming and comfortable as it is beautiful.

Asked how it all began, Deedee chuckles, “Collectors come into this world as collectors. And I was lucky to be endowed with the collector gene.” That gene began to exert its influence before she was six, growing up in Washington state, where she collected fossils and molted snakeskins.

Have they always both been collectors? Barrie answers that: “I’m like a relief pitcher on the team that wins the World Series. My team won, so I get a ring even if I faced only two batters. People should understand that this is Deedee’s show.”

A copy of H. W. Janson’s History of Art first brought them together while both were studying history at the University of Oregon. She was a sophomore keen to read Janson thoroughly but could not check it out of the library since it was a reference book. He was a graduate teaching assistant with a copy of the illustrated volume in his office. “I saw it among his books there when he was out of the office,” she says, “But I felt I first needed to be introduced.”

The introduction effected, one thing led to another.

When I ask what qualities first attracted Deedee to the aesthetic movement, she replies: “It was exciting to explore the whole nineteenth century, and doing so from the viewpoint of my job in the art business led me to examine the full picture—what furnishings people lived with, and who were the important designers.” What she loved about late nineteenth-century American furniture was “how designers took off from Eastlake to create their own distinctive vocabulary of form.”

A watershed moment occurred in 1986, when Frelinghuysen organized the exhibition In Pursuit of Beauty: Americans and the Aesthetic Movement, which opened a great many eyes to the field. “Certainly by that time,” Barrie says, “Deedee’s frequently articulated standard of judgment of a piece was ‘would the Met want this?’”

One of the earliest Met acquisitions in which Deedee played a direct role was a Lejambre table. “At the time, there hadn’t been too many Lejambre tables on the market,” Frelinghuysen recalls, “and this was one of their fabulous square examples, with a wonderfully strict rectilinear form. The best ones have fantastic inlay. But this one was ebonized, quite plain. However, the daylight hit it a certain way as I examined it. I thought, ‘there‘s something under that finish—inlay?’ So I called Deedee and asked if she would come down and look at it with me.”

Deedee says: “It was a case where, once again, nineteenth-century decoration wasn’t well understood at the time.” She agreed with the hunch, paid for the table, and, says Frelinghuysen, the Met’s conservators subsequently revealed that, “indeed, it had wonderful inlay.”

The Wigmores were not only pioneering collectors of American aesthetic furnishings, they also complemented their decorative arts collection with equally superlative American landscape paintings by such artists as Albert Bierstadt, Alfred Thompson Bricher, Sanford Robinson Gifford, George Inness, and William Trost Richards. Many of these works, and those by less-familiar masters they collected, such as William Stanley Haseltine, Walter Launt Palmer, and Arthur Fitzwilliam Tait, represent the second generation of the Hudson River school—a group of artists whose work both Frelinghuysen and Kornhauser regard as particularly well matched to the adventurous designs that characterize the aesthetic movement.

“Artists like Gifford, Kensett, and Inness were very progressive,” Kornhauser observes, “proto-impressionists, ahead of their time. Because their works embody so much light, air, and atmosphere, they harmonize beautifully with the linear restraint of aesthetic movement furnishings.”

Discussing the selection process for the gift, both curators say they aimed at circumspection. “As we already have very strong collections of paintings and decorative arts of this era, we wanted to build on that strength,” Frelinghuysen says. “Many of the selected works are exemplars of their kind.” She cites a superb Herter Brothers cabinet of inlaid maple(see Fig. 1). “It isn’t just a Herter masterpiece, but a type of Herter work that we haven’t possessed before.”

Kornhauser agrees: “Though we have the finest Hudson River school collection of any museum, paintings in the Wigmore gift will now fill crucial voids. Among them are the extraordinarily beautiful Sanford Gifford view of Claverack Creek (Fig. 16) together with Gifford’s oil study for it.” She adds that because the paintings are hung in “absolutely the right period frames, they extend that aesthetic unity of all of the objects together.”

“I don’t think that people realize just how dark the nineteenth century was,” Deedee adds. “At night, and even on overcast days, interiors were dimly lit by gaslight supplemented by oil lamps. The gold frames against the colors and gilt touches in the wallpapers shed warm, reflected light in a room.”

Certainly, the Wigmores’ promised gift represents a singular combination of decorative and fine arts. “This was a tremendously important idea to the aesthetic movement,” notes Frelinghuysen, to which Deedee adds: “Combining the arts also offers visitors an inviting way to identify with a variety of objects.”

“There is unquestionably a ‘wow’ element to the Wigmores’ apartment,” Frelinghuysen says. “You’re stopped in your tracks, your jaw drops. We’re trying to convey a sense of that in the exhibition by grouping objects and paintings, against backdrops of the same kinds of wallpaper that the Wigmores have. I’m really hoping that visitors will walk into the exhibition gallery and experience that ‘wow’ moment.”

“The thing we most want for museums,” Deedee says, “is for people who visit them to be inspired by the best of everything, or to discover things they didn’t even know existed. Beauty in art has long been out of fashion, but I am currently hearing that people are coming back to beauty. So, I hope that visitors to this show will not only enjoy what’s there and how it’s presented, but also that some will realize possibilities for their own personal collecting and decorating.

“Ultimately,” she says, “I hope we will make some more friends for the nineteenth century and its kaleidoscopic variety of arts.”

Aesthetic Splendors: Highlights from the Gift of Barrie and Deedee Wigmore is on view at the Metropolitan Museum of Art to August 16.