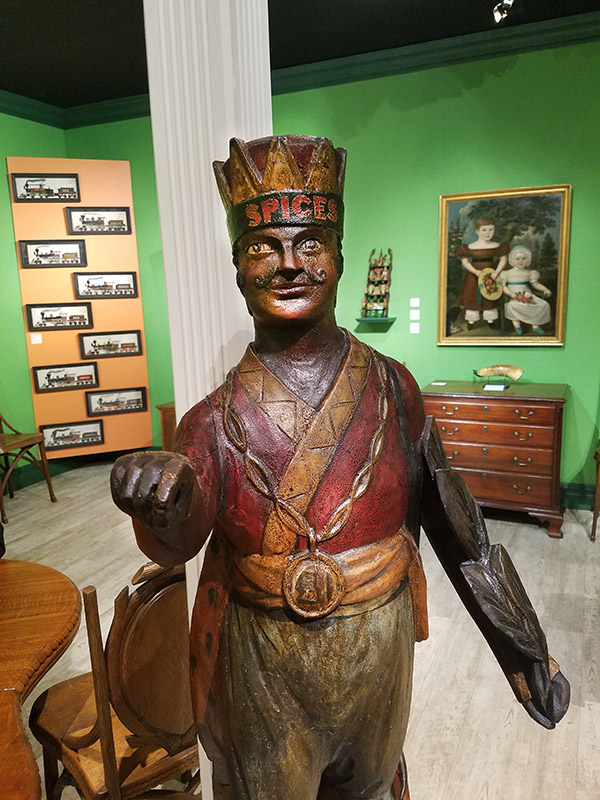 Throughout the fair, we’ll bring you selections of what’s on offer from some of our favorite galleries.

The New Oxford, PA, dealer is known for his inventory of folk art, firefighting memorabilia, and firearms. Last year, Kinzle’s expert eye in the latter material gained him some extra eminence when he aided in the recovery of a Revolutionary War–era long rifle stolen years ago from a Pennsylvania historical society (read about it here). kellykinzleantiques.com

Highlights in his booth include an aesthetic movement dining suite—chairs, table, and a sideboard with vine and leaf motifs and carved atlantes—in oak and poplar from a cottage in Eagles Mere, Pennsylvania . . .

The Winter Show booth of Susan Menconi’s and Andrew Schoelkopf’s nineteen-year-old gallery—which specializes in American art from the Hudson River School to the Ashcan school and modernism—is an elegantly spare affair, containing a choice selection of paintings from 1800 to 1950. msfineart.com

These include two oil sketches by Thomas Cole: (top) an 1840s Italian scene, likely depicting Sicily, that descended in the artist’s family until its consignment to the gallery; and (bottom) View of Schroon Mountain, 1838 . . .

. . . and a characteristically dramatic 1920 painting by N. C. Wyeth, The Duel on the Beach, one of a series of littoral battles that the Howard Pyle acolyte would paint during his short life.

Some highlights are a c. 1900 René Lalique brooch with elements of plique-a jour enamel and carved glass, as well as diamonds and aquamarine . . .

. . . along with a low table titled Lunar Sea II, made in 2019 of Mozambique wood with an agate insert by Michael Coffey, who says the flowing lines of his works are meant to evoke “the rush of Vermont rivers and the natural erosion of time itself.”