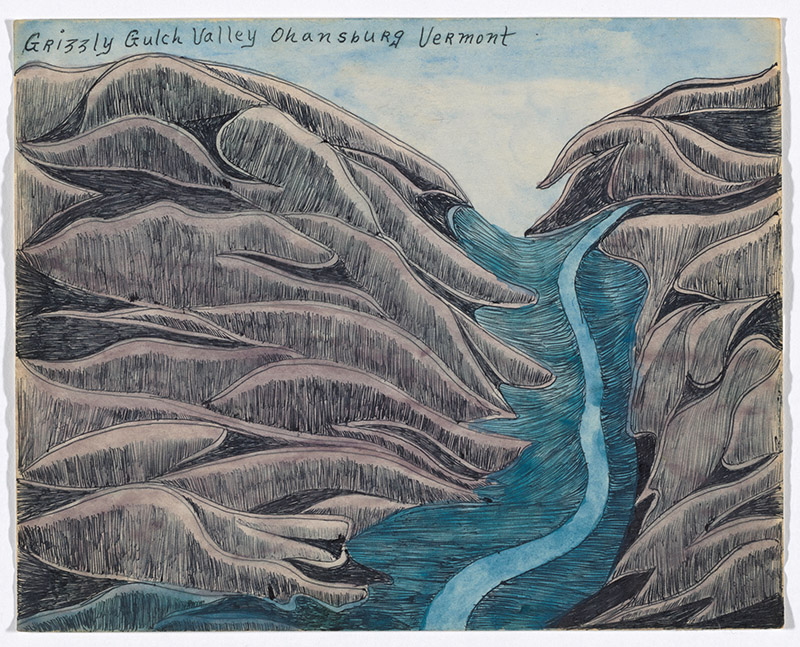 The facts of Joseph Yoakum’s life are sketchy, veiled in part by his own fanciful memories. Yet even taken with a grain of salt, Yoakum’s is a remarkable saga of a Black man adrift in early twentieth-century America, swept along by circumstance and his sense of wanderlust.

Born in Greene County, Missouri, in 1890, he left home as a boy of ten and joined a circus as a horse wrangler. He later posted bills for Buffalo Bill Cody’s Wild West show, served in the US Army in France during World War I, and did a stint as a merchant seaman. At other times Yoakum was variously employed as a miner, a railroad worker, and an apple picker. (He was also committed to a Chicago psychiatric facility fora time in the 1940s.) Then, in the 1960s, during the last ten years of his life, Yoakum added another title to his resumé: celebrated artist.

In the decades since his artwork was first seen in public—displayed in a southside Chicago coffee shop, then soon championed by artists of the city’s imagist school of painting—Yoakum has come to be regarded as one of the most esteemed figures in the field of visionary American self-taught art. Joseph E. Yoakum: What I Saw, a retrospective survey of his work that was co-organized by the Art Institute of Chicago and debuted there this summer, comes to the Museum of Modern Art in New York in late November.

Yoakum primarily made landscapes, drawn in pen and ink, colored pencil, and pastels. A deeply religious man, Yoakum said he heard a calling to make “spiritual unfoldments”—depictions guided by faith—of the places he had seen in his journey-filled life. Though he captioned and titled his drawings precisely—Mt Grazian in Maritime Alps near Emonaco Tunnel France and Italy by Tunnel, for example—his worlds are largely imaginary: charting impossibly craggy peaks, dense forests, choppy seas, and winding roads, all devoid of people. The worlds Yoakum depicts are strange and surreal, but beautiful and imbued perhaps with a wistful sense of longing: the visions of a man who spent his life forever seeking new vistas.