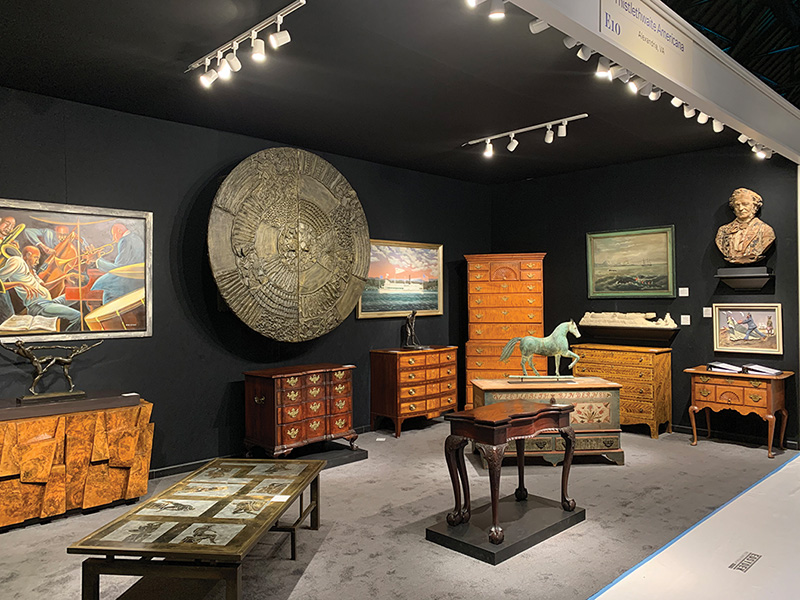 The Winter Show—the elegant art and antiques fair held every January at the Park Avenue Armory in New York—is exhausting, enervating, and can seem endless over the course of its ten-day run. Despite all that, I look forward to it more and more each year.

We at the magazine pack a lot into those days, starting with the luncheon we host for the vetting committee—the experts who ensure that everything on offer is authentic and correctly identified. On the social side, we had afternoon tea at the Explorers Club— amidst doughty portraits, Inuit artifacts, and the skin of a man-eating tiger—with our editorial board of advisors, a group of curators, collectors, and academics who help keep us attuned to currents in the world of arts scholarship.

Once again we presented a live taping of our podcast, Curious Objects, at the Armory. This year co-hosts Benjamin Miller and Michael Diaz-Griffith spoke with three young art and antiques dealers exhibiting at the show—Ria Murray of Lillian Nassau; James Boening of James Robinson, Inc.; and Taylor Thistlethwaite of Thistlethwaite Americana—about objects that ranged from a Tiffany favrile glass pig to a brace of Scottish flintlock pistols. Michael also moderated another event we produced during the show: an illuminating discussion with London-based dealer Martin Levy of H. Blairman and Sons; design historian and ANTIQUES columnist Glenn Adamson; and designer Adam Charlap Hyman about the history of attitudes toward ornamentation in the decorative arts.

Those are only a few highlights. Apart from attending related events around New York during the show— such as the Decorative Arts Trust’s Emerging Scholars Colloquium—we spent countless hours at the Armory taking notes, conducting interviews, and snapping photographs for the website stories we publish throughout the show and our posts on Instagram.

The rest of the time we’re looking and learning. The opportunity to do that (for those of us not buying and selling, at least) is the most important feature of the Winter Show. There are always new discoveries. A fetching and enigmatic late nineteenth-century portrait of a young woman in a tall hat stopped traffic at the booth of Nathan Liverant and Son. She turned out to be Mattie Edwards Hewitt (1869–1956), who went on to have a notable career as a photographer of architecture and landscapes. I suspect you will be reading more in these pages about Hewitt’s work and other interesting aspects of her life. Another revelation was to be found in the booth of Elle Shushan: the paintings of Andrew LaMar Hopkins, a contemporary artist from New Orleans whose interior views and street scenes re-imagine antebellum Creole life in that city.

The very locations of those two examples might have come as a surprise in past years. Liverant’s stock-in-trade is early American furniture, while Shushan is a specialist in eighteenth-century portrait miniatures. But a wonderful cross-fertilization is developing at the Winter Show. I was particularly taken with the mix of works exhibited by Thistlethwaite, who came to the Armory for the first time. Reflecting a broader view of the spectrum of Americana, alongside nineteenth-century high chests and folk portraits, he showed a painting by Ernie Barnes, an NFL playerturned-artist (one of his paintings was used for the cover of a Marvin Gaye album), and designs by Paul Evans, a modernist star of the American studio craft movement. The loan exhibition from the Hispanic Society Museum and Library also added to the fresh, cosmopolitan air of the Winter Show, and the sense of its widening cultural compass.

There was a feeling of something like conviviality among the works of art and design on view from across time, place, and medium. If the Winter Show were a person, it would be one who is curious, intelligent, openminded, sophisticated in taste, generous of spirit, and eager to learn. Here at the magazine we admire those qualities—they are the same as those we try to bring to our pages.