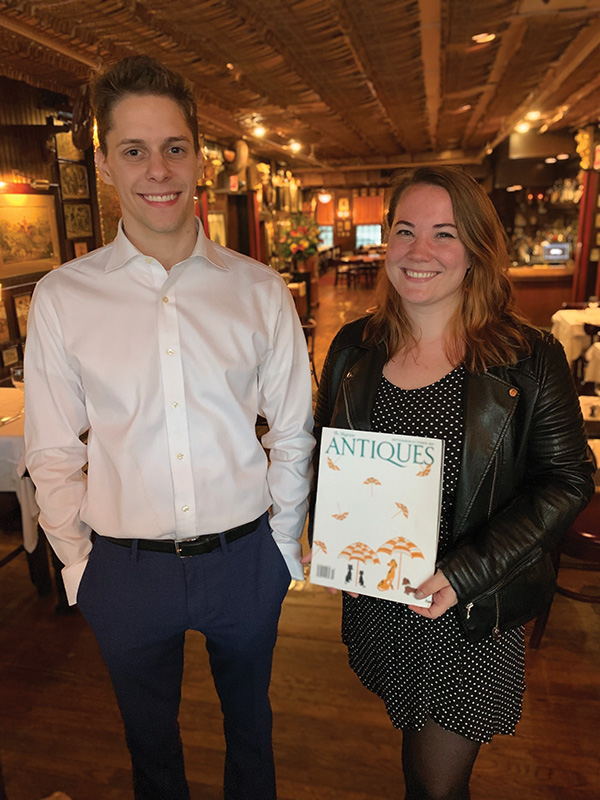 Last autumn in this space I wrote about some of the younger folks I have been pleased and heartened to meet in the course of my work—still in their twenties and with a deep, abiding interest in the fine and decorative arts and architecture of the past. Two of them, Pippa Biddle and Ben Davidson, who run an antiques shop and do repair and restoration work in Germantown, NY, approached me with the notion to write a regular column that takes an in-depth look at a specific, and perhaps somewhat obscure, type of artwork or artifact. We’ve called the column Object Lesson and you’ll find the first installment in this issue. The subject is Taghkanic baskets, which have been woven by the residents of a small enclave in the Hudson River valley since the mid-eighteenth century. I hope you’ll find their article engaging and enlightening.

This time around, I want to tell you about some young people of my acquaintance closer to home—right here on the editorial staff of The Magazine ANTIQUES. Sammy Dalati is our senior editor and Katherine Lanza is our managing editor, but these titles give but a scant notion of what the two actually do here.

Sammy, twenty-seven, hails from Morrison, a small town on the Illinois prairie, but was drawn to the big city. At New York University he majored in studio art, preparing for a career as an artist. “I focused on photography, but did everything—sculpture, painting, video art, performance art,” he says. “My mother’s example played a big part in my choice of studies. She makes art of all kinds—she’s even made furniture—and always encouraged my efforts.”

We like to think of this as an authoritative magazine. Sammy fact-checks our articles and takes that core responsibility seriously. He is relentless in the pursuit of accuracy. He also produces and edits our podcast, Curious Objects, and is spearheading our plans to create more video content.

Sammy also writes for the magazine and our website. I think he has the makings of an excellent art critic. While you can say he is finding his voice, Sam thinks deeply about the subjects of his stories and that is a rare and admirable trait in a young writer. (I’ve met quite a few of those who seem to think that sounding smart was the same as being smart.) Even rarer, he likes to write. “I have a position here that allows me to explore ideas about the world of things and find ways to articulate those thoughts,” he says. “I appreciate that.”

Kat, as she likes to be known, is twenty-four and was born in Brooklyn. (Her family lived in the Heights at the time, and she still bears a grudge against her parents for giving up their apartment overlooking New York harbor.) She was raised on Cape Cod and attended Pratt Institute in Brooklyn where she majored in critical and visual studies. “It was a kind of make-your-own-major program,” she explains. “You could study philosophy and other liberal arts subjects along with art history.” She minored in psychology. “I get to use that a lot.” Her hobbies are photography and knitting.

As managing editor, Kat keeps the editorial train running on time. She tracks the progress of every article and knows what state it’s in. Has it been edited? Fact-checked? Is the layout done? Kat knows.

She also wrangles the photographs we publish from museums and other institutions—and shoots them for the magazine herself from time to time—and writes the captions in our infernal, information-chocked house format. She writes front-of-book articles. And she handles the paperwork so that our contributors get paid.

Believe it or not, that is not the end of it. Kat manages our social media feeds—Instagram, Facebook, and Twitter—and she essentially taught herself to use web development tools so that she can makes changes and repairs to our website. “I get to do a little bit of everything,” she says. “It’s fun.”