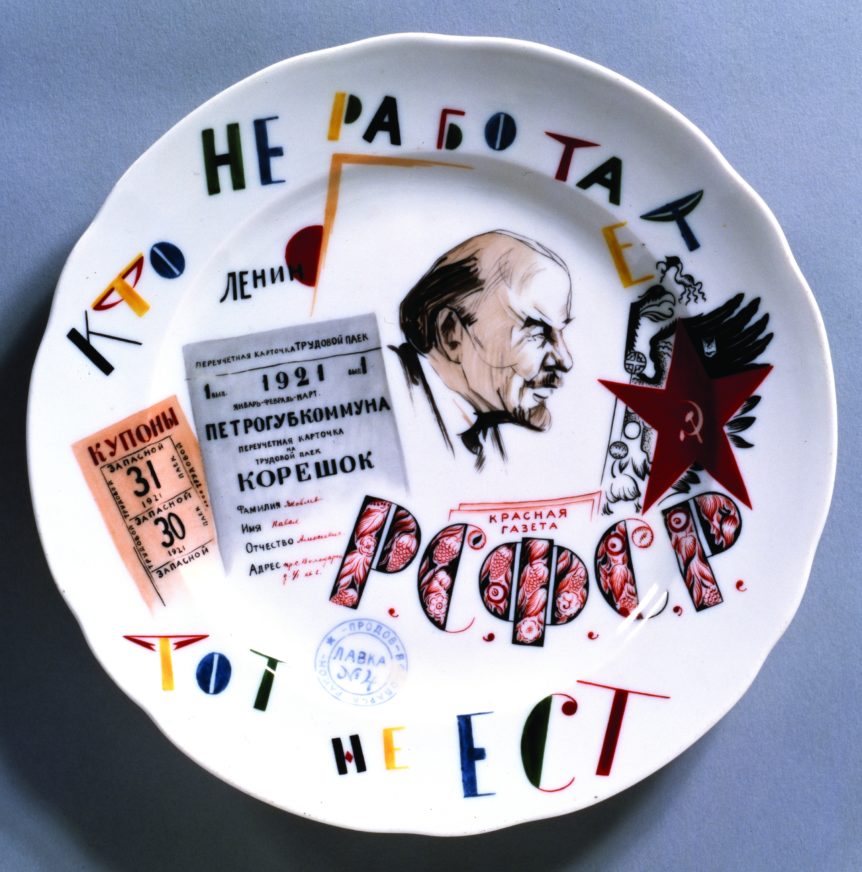 In this edition: Soviet ceramics; the Met’s adorable hippopotami; and inspired British pottery at Yale

Russophiles know that this month marks 100th anniversary of Russia’s October Revolution. Perhaps less well known is the fascinating ‘porcelain revolution’ that unfolded in the wake of the political upheaval. Russia’s 18th and 19th century elites had a taste for fine china. The famously western-oriented and modernizing Russian emperor Peter the Great visited Dresden in 1718, and, delighted by the delicate wares he saw there, tried establishing a porcelain manufactory at home, to no avail. His daughter, the Empress Elizabeth, succeeded where Peter had failed: in 1744, she established the Imperial Porcelain Factory in St. Petersburg, under the technical direction of a mining engineer named Dmitri Vinogradov, who developed his own formula for making ‘true’ (kaolin-based) porcelain. The nobility dined on porcelain dinner services, gifted one another porcelain tea sets and painted figurines, and, this being Russia, meticulously decorated porcelain Easter eggs.

"A Red Man," dinner plate painted with the slogan "All Power to the Soviets,” designed by Mikhail Adamovich, painted by Maria Kirillova. State Porcelain Factory, USSR, 1921. Hermitage Museum, transferred in 2002 as part of the collection of the Museum of the Imperial Porcelain.

The Imperial Porcelain Factory did not collapse during the Russian revolution. Like Sèvres following the French Revolution, the IPF adapted to a new political reality, and its resources were marshalled to celebrate Soviet ideals, and porcelain “blanks,” or undecorated plates, provided the canvas. The renamed State Porcelain Factory was full of blanks that had been waiting to be painted and gilded before the revolution. Rather than destroying them—which would not have been a surprising gesture for a new regime—Vladimir Lenin viewed both the porcelain and the factory as precious resources. Artists were hired, and the blanks were painted with scenes that resemble those of early Soviet propaganda posters and murals, featuring stylized farmers and factory workers, agricultural machinery at work, and pro-Soviet slogans, all showing the clear influence of Russian Constructivism and Suprematism in their design.

One 1921 dinner plate in the collection of the Wolfsonian Museum from a series painted by Mikhail M. Adamovich greets diners with a portrait of Lenin and the warning “he who does not work does not eat.” Some examples of Soviet porcelain are folksy, reminiscent of Marc Chagall paintings, decorated with figures wearing caps and babushkas, playing the accordion, celebrating weddings, or working the fields. Others are almost Kandinsky-like, entirely abstract, and seem to presage the sleek, Art Deco ceramics that would captivate Europe and America in the 1920’s and ‘30s. Examples of Soviet porcelain pop up at auction from time to time, and can be found in numerous museums, including the V&A, the Met, the Wolfsonian, and of course the Hermitage. The 1992 exhibition “News from a Radiant Future,” organized by Ian Wardropper at the Art Institute of Chicago, featured objects from an important collection (that of Craig and Kay Tuber), and its catalog remains an indispensable reference volume.

In other centennial news, William is turning 100! Well, more accurately he’s somewhere between 3,795 and 3,978 years old, but the Met’s unofficial hippopotamus mascot (an ancient Egyptian faience figure that stands about 4.5 inches tall) looks none the worse for wear just shy of his 4th millennium. The Museum is celebrating William’s centenary in its collection this year, and his fascinating story is enjoying a well-deserved resurgence of attention. A series of short essays and videos on the Museum’s website explain how he got his name (a surprisingly complex tale from the early 1930s that involves the British periodical “Punch”) and why it is that he captured the popular imagination a century ago. William’s “moment” is a direct reflection of the fascination with ancient Egypt, or “Egyptomania” that swept Europe and America in the 1910’s and ‘20s, thanks to a series of high-profile archaeological digs. The western fascination with all things Egyptian dates at least as far back as the turn of the 19th century when Napoleon’s Egyptian Campaigns inspired the design of Egyptian revival furniture, Egyptian-style jewelry, and Orientalist paintings. The phenomenon was reignited in the 1910’s and ‘20s, and when British archaeologist Howard Carter unearthed the tomb of Tutankhamun in 1922, fascinated museum visitors lined up to see artifacts like Tutankhamun’s dazzling gold death mask. William thus had perfect timing, and not just because “Tutmania” was sweeping the nation: the particular shade of turquoise-colored glaze that gives him his distinctive hue just happened to beautifully complement the cool color palette of Art Nouveau ceramics and glass. In other words, ancient Egyptian figurines and vessels that were glazed “William blue” were suddenly au courant. But as Met Curator Isabel Stünkel explains in a short video called “Precaution,” his dainty appearance is deceptive: while there’s no denying that William is adorable, real life hippos were as much feared as they were respected in ancient Egypt, and it’s likely that three of his four stubby feet were deliberately broken off to curb his destructive impulses before he was buried with a mummy. (They’ve since been conserved so he can stand upright.) His blue color likely represents the life-giving Nile river, and his body is decorated with a design of open and closed lotus flowers, which suggest the beginning, end, and rebirth of life. William is currently on view in the Museum’s Gallery 107, positioned in a quiet face-off with another hippo made in 1936 by the American artist Carl Walters. Waters sought to recreate the turquoise color of ancient Egyptian faience, as his figurine demonstrates. We’ll call it a draw.

And a lush, inspiring exhibition at the Yale Center for British Art offers a multicultural perspective on the world of British studio ceramics. “Things of Beauty Growing,” on view through December 3rd, brings together 150 works that are examples of (or inspired by) the vessel form, an idea so superficially traditional as to seem radical nowadays. Contemporary vessels in the tradition of ancient forms like Korean moon jars of the Joseon dynasty—one by Adam Buick and the other by Akiko Hirai—gracefully demonstrate the range of expression possible in this classic silhouette. The former is pure white and perfectly smooth, the latter is rugged and craggy. A striking Song dynasty vase with, dark, incised floral designs on a pale ground catches the eye, and contemporary artist Clare Twomey’s large installation “Made in China,” which comprises 80 bright red porcelain vases, underscores the global influences that have shaped (and been shaped by) the British studio ceramics tradition. Almost all the greats are represented, including Bernard Leach, Lucie Rie, Ruth Duckworth, Magdalene Odundo, and Edmund de Waal. The exhibition was organized by Glenn Adamson, senior scholar at the Yale Center for British Art (and Magazine Antiques Editor-at-large); Martina Droth, the deputy director of research and curator of sculpture at the YCBA; and Simon Olding, the director of the Crafts Study Centre and a professor of modern craft at the University for the Creative Arts. The show will travel next year to Fitzwilliam Museum at the University of Cambridge. An exhibition catalog, co-published with with The Fitzwilliam Museum in association with Yale University Press, is available in the Museum’s shop.